The saloon was converted in 1969 from a former Hastings unit buffet car, and due to its unique ability to act as a Driving Trailer for a variety of existing locomotive types is an integral part of the Network Rail infrastructure inspection fleet.  Caroline was recently fitted with a toilet retention tank to conform with the latest regulations and ensuring it can remain in service for many years to come.

Two models have been received by Revolution; these show the vehicle in its original 1969 form immediately after conversion, with headcode box and SR jumper cables, and in its current form with modern light clusters, plated over headcode box and underfloor toilet retention tank.

Revolution’s attention to detail extends to the interior too, where different patterns of armchairs have been moulded based on our own research trip to Derby in 2019 (for the current arrangement) and photographs supplied by former SR engineers who worked on the original conversion. 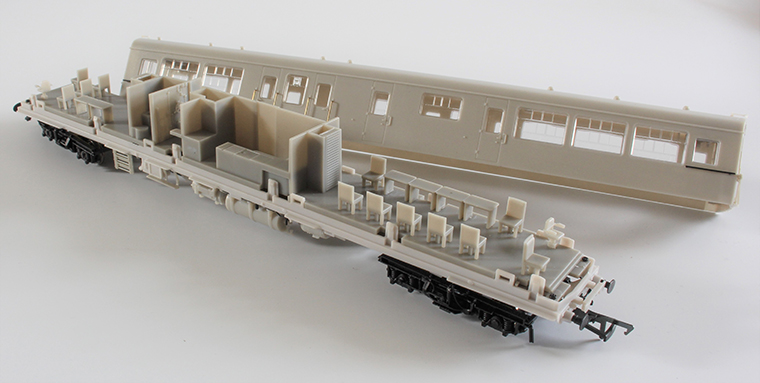 Revolution is offering three versions of Caroline:  As originally converted in BR Blue grey livery with yellow ends, in Network SouthEast livery as operated from 1991 to 1996, and in the present-day Network Rail Brunswick green livery.

Caroline can be ordered directly from Revolution Trains for the pre-order price of £149.  Models may be available after production, however, the MSRP will increase.