Rapido Trains UK reveals plans for a new range of models inspired by the 1953 film, 'The Titfield Thunderbolt', with model deliveries expected for the 70th anniversary of the film’s release in 2023.

The Titfield Thunderbolt tells the story of group of villagers determined to save their branch line after British Railways announces its closure. When a rival bus company sabotages the newly acquired train prior to an official inspection, the villagers resurrect the line’s first locomotive, Thunderbolt, and, against great odds, obtain permission to keep their line open.

The story was inspired by the group of enthusiasts, led by Tom Rolt, who took over the 2ft 3in gauge Talyllyn Railway in 1951 and thus kick-started the railway preservation movement. The film was the first of Ealing Studios’ famous ‘Ealing comedies’ to be filmed in colour and it was released in March 1953.

Rapido’s Sales & Marketing Manager Richard Foster said, “The Titfield Thunderbolt is often criticised by ‘Ealing comedies’ aficionados for not living up to the same standards as, say, Passport to Pimlico or The Lavender Hill Mob but, for railway enthusiasts, it’s become arguably the greatest British railway film of all time.

“The Titfield Thunderbolt means so much to so many people. For some, it’s been a life-long favourite. Both Operations Manager Andy and I have loved it since we were children and we still love it today. We know that many others feel the same, which is why it’s a huge privilege to bring this superb range of products to life.”

The Titfield models will be available in three packs:
Pack 1 is a standard pack, containing Thunderbolt, ‘Dan’s House’ and Loriot Y with No. W68740.
Pack 2 is a deluxe pack, containing sound-fitted Thunderbolt, Dan’s House and Loriot with W67840 plus 4mm:1ft scale figures and commemorative booklet.
Pack 3 contains the Buffet Car and No. W68740, plus 4mm:1ft scale figures.
The Bedford OB will be available as a standalone model in Pearce & Crump livery

Models are expected to be in stock by March 6, 2023, the 70th anniversary of the film’s release, although it is expected that some models will be available during 2022. All models, including film and non-film versions, will be available through Rapido Trains UK stockists or direct from the manufacturer. Identities and guises for non-Titfield models – as well as prices for all models – are still to be confirmed. 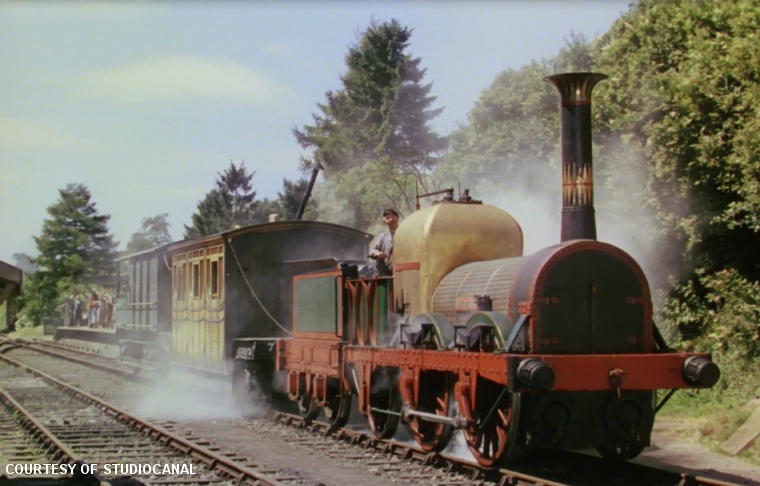 Lion and its sister Tiger were built by Todd Kitson & Laird in Leeds for the Liverpool & Manchester Railway in 1838. Rebuilt several times during its career, Lion passed into the hands of the LNWR, which sold it to the Mersey Docks & Harbour Board in 1859, where it was eventually used as a steam pumping engine. It was rebuilt into its current form at Crewe Works in 1928 after it was saved for posterity by members of Liverpool Engineering Society. Steamed in the 1930s and 1950s – when it was used in The Titfield Thunderbolt – it last ran in the 1980s. Lion is now a key exhibit in the Museum of Liverpool.
What liveries will be produced? LMR Lion in its post-1928 condition.
Price? TBC
What stage it is at? CAD design 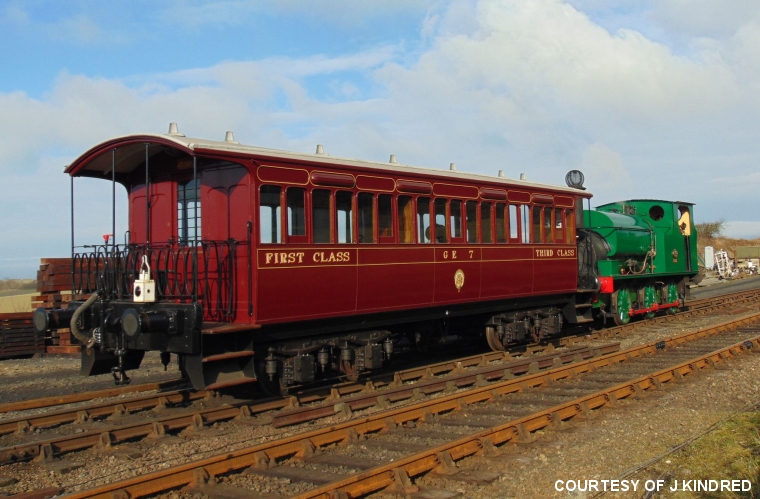 The unusual bogie coach used in The Titfield Thunderbolt was one of a pair built by the Great Eastern Railway for the Wisbech & Upwell Tramway. Their low height and open platforms enabled passengers to use them from the W&U’s roadside depots.

Built to Diagram 603, Composite No. 7 and Third No. 8 were transferred to the Kelvedon & Tollesbury Light Railway in Essex in 1928 after the W&U suspended passenger services. Withdrawn by BR as Nos. E60461 and E60462, the former No. 8 starred in The Titfield Thunderbolt and was then restored to full GER condition as part of the National Collection; it was later scrapped in 1957. The body of No. 7 survived and has been restored to working order at the North Norfolk Railway, where it has been fitted with a ‘Titfield’ style bar.
What liveries will be produced? GER, LNER and BR liveries with fully accurate interiors as well as preserved No. 7 as it is today.
Price? TBC
What stage is it at? Research stage 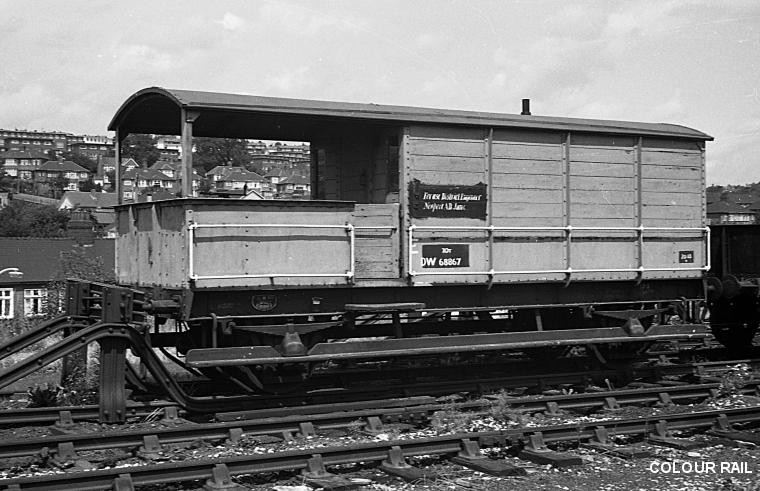 No. W68740, the ‘Toad’ brakevan that brings up the rear of both trains in the film, was built to Diagram AA20. Outwardly following the GWR’s famous ‘Toad’ design, the AA20, built between 1934 and 1943, featured inside lamp brackets, lamp irons and a padded seat for guards. At least five AA20 ‘Toads’ survive.
What liveries will be produced? GWR, BR and Departmental liveries (lower footstep versions only)
Price? TBC
What stage is it at? CAD design 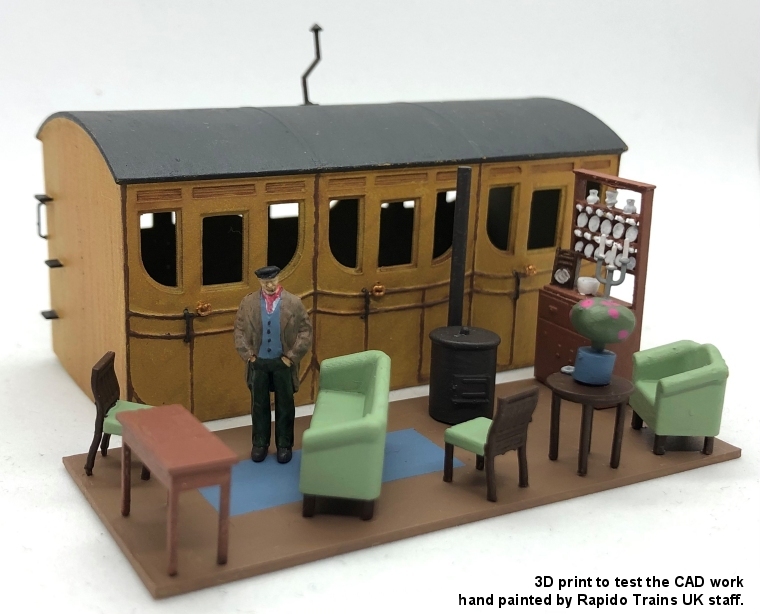 Platelayer-cum-fireman Dan, played by Hugh Griffith, lived in what appeared to be a grounded coach body. In actual fact, this was a prop built for the film. When his house is commandeered for use on the railway, it is mounted on a GWR ‘Loriot Y’ flat wagon.

The GWR built two ‘Loriot Y’ machinery trucks in 1939 for civil engineering duties. No. 41989 was used in the film but has not survived. Happily, sister ‘Loriot Y’, No. 41990, was saved after withdrawal in 1994 and is based on the Severn Valley Railway.
What liveries will be produced? GWR, BR and Departmental liveries.
Price? TBC
What stage is it at? ‘Loriot Y’ (CAD design), ‘Dan’s House’ body (CAD design and 3D test print). 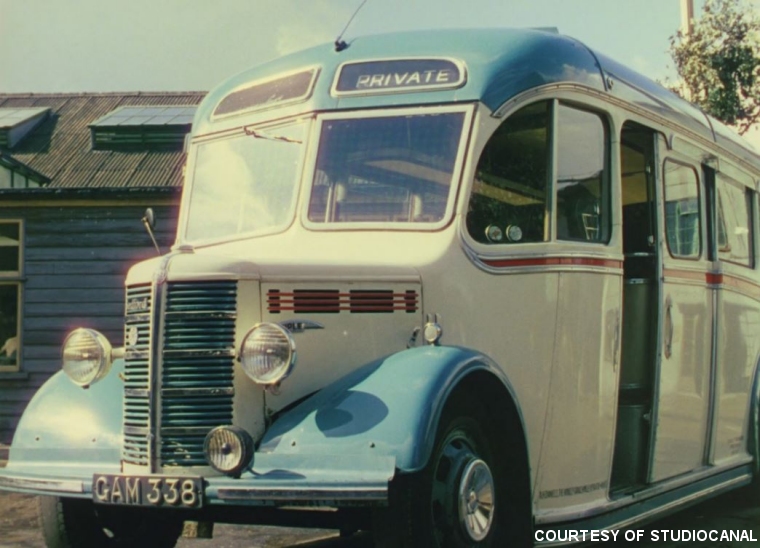 Bedford introduced its new OB chassis in 1939 and worked with coachbuilder Duple to develop the distinctive ‘bullnose’ Vista body. Several hundred were built before production was suspended due to the Second World War. Full OB production restarted after 1945 and over 12,000 were built before the design was superseded by the SB in 1951. Although GAM338, Pearce & Crump’s OB, hasn’t survived, some 180 still do, making it one of the most numerous preserved coaches.
What liveries will be produced? TBC but with as wide a regional spread of operators as possible. Will be produced to Rapido’s high standards with lights, poseable front wheels and full interior and exterior detail.
Price? TBC
What stage is it at? Research