Revolution Trains has opened orders for its forthcoming Cemflo/PCV cement wagon, produced in association with Accurascale. The models will feature NEM couplers in kinematic sockets, with separately-fitted parts.

CAD work is now complete and tooling will commence once enough orders are received. On offer are pre-TOPS versions in silver with the attractive Blue Circle name boards in four triple packs (A, B, C and D) making a total of 12 differently-numbered models available. TOPS versions are also being offered, in silver with no name boards, in three different triple packs. These are more suitable from the mid-1970s onwards. Each wagon features subtle differences in the colour, style and position of numbers. 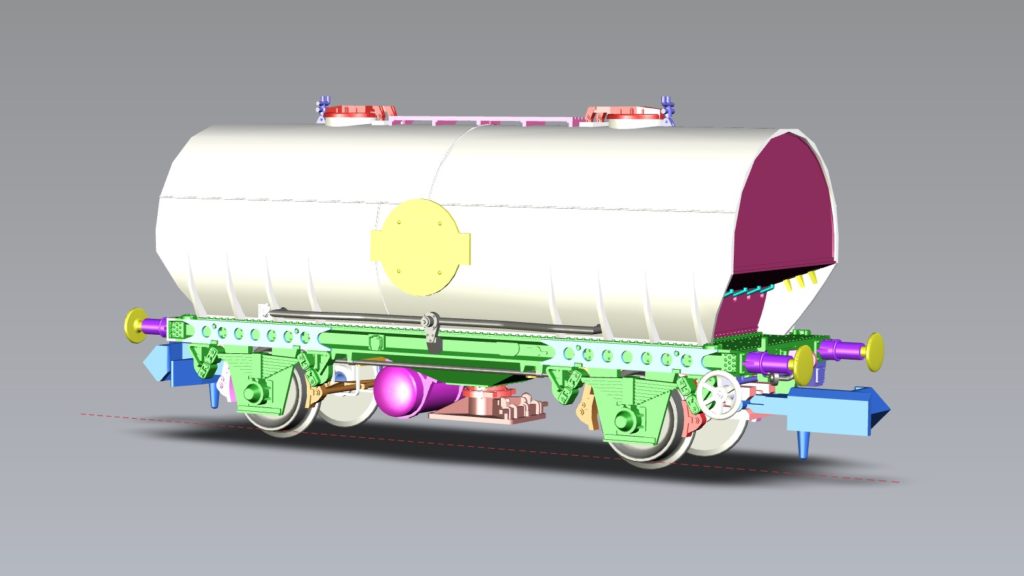 CAD artwork of Revolution Trains' PCV 'Cemflo' wagon, for which orders are being taken.

In their original livery the wagons could be seen with steam locomotives and diesels across the network. One of the most celebrated workings of the 1960s was the traffic between Cliffe, in Kent, to Uddingstone, near Glasgow, a turn which often involved pairs of Class 33 locomotives reaching as far north as Doncaster – a rarity in the days of steam.

Also, the manufacturer has confirmed it will be offering the Class A tanker in 2020, claiming "it is a logical follow-on to Revolution’s well-received Class B tanker, delivered to customers in 2017." Joining it (as it shares the chassis) will be the MTV box wagon conversion, used by engineers with the fishkind name 'Zander.'

The Class A tanker was designed in the late-1950s at the same time as the Class B – with which it shares many common parts – but with a longer barrel as in service it carried lighter fuels. Originally painted silver, for much of the 1960s and 70s these wagons ran in the mandated livery of pale grey tank with red solebar to indicate that the contents were highly flammable. It is anticipated that original and revised Esso liveries will be offered along with Mobil and Stavely Chemicals. In later years some were also used on weedkilling trains, bearing Nomix-Chipman colours.

In 1975, 150 ex-Esso tank wagons received box bodies for use on minerals, stone, sand and aggregate traffic. Recoded MTV under TOPS, many were later used by the engineers, recoded ZTV and named 'Zander', where they were used alongside other departmental wagons such as 'Sturgeon' track carriers, also offered by Revolution.

Originally a chocolate brown with distinctive 'STONE' branding, some were also given the popular grey and yellow 'Dutch' colours when in engineering use. As well as the two new items of tooling, Revolution is proposing another run of its Class B tankers in one new livery and the most popular existing versions. Visit its website for more information on both models.