One of the smallest 0-6-0 O gauge RTR locomotive to appear in recent years has arrived in the office. Howard Smith takes a closer look.

It was a little over a year ago that Minerva Model Railways announced the production of a finescale, injection-moulded O gauge model of the Manning Wardle K Class 0-6-0ST. Following the trend of manufacturing locomotives that are suitable for small O gauge layouts, these industrial workhorses could be found around light railways and mainline settings, alike. The new model follows Minerva’s Great Western Railway 57XX/8750 0-6-0PT locomotives.

The first of Manning Wardle’s Class K was built in 1864 at the company’s factory in Leeds. Many of these locomotives were built specifically for civil engineering contractors, including those engaged in building railways. Subsequently, many of these locomotives found their way onto industrial and light railways with a few ending up in mainline company ownership, including the Great Central Railway and Great Western Railway. The locomotives had many variations, including different cab, buffers, brakes and sandboxes. With a long lifespan, at least two are preserved. 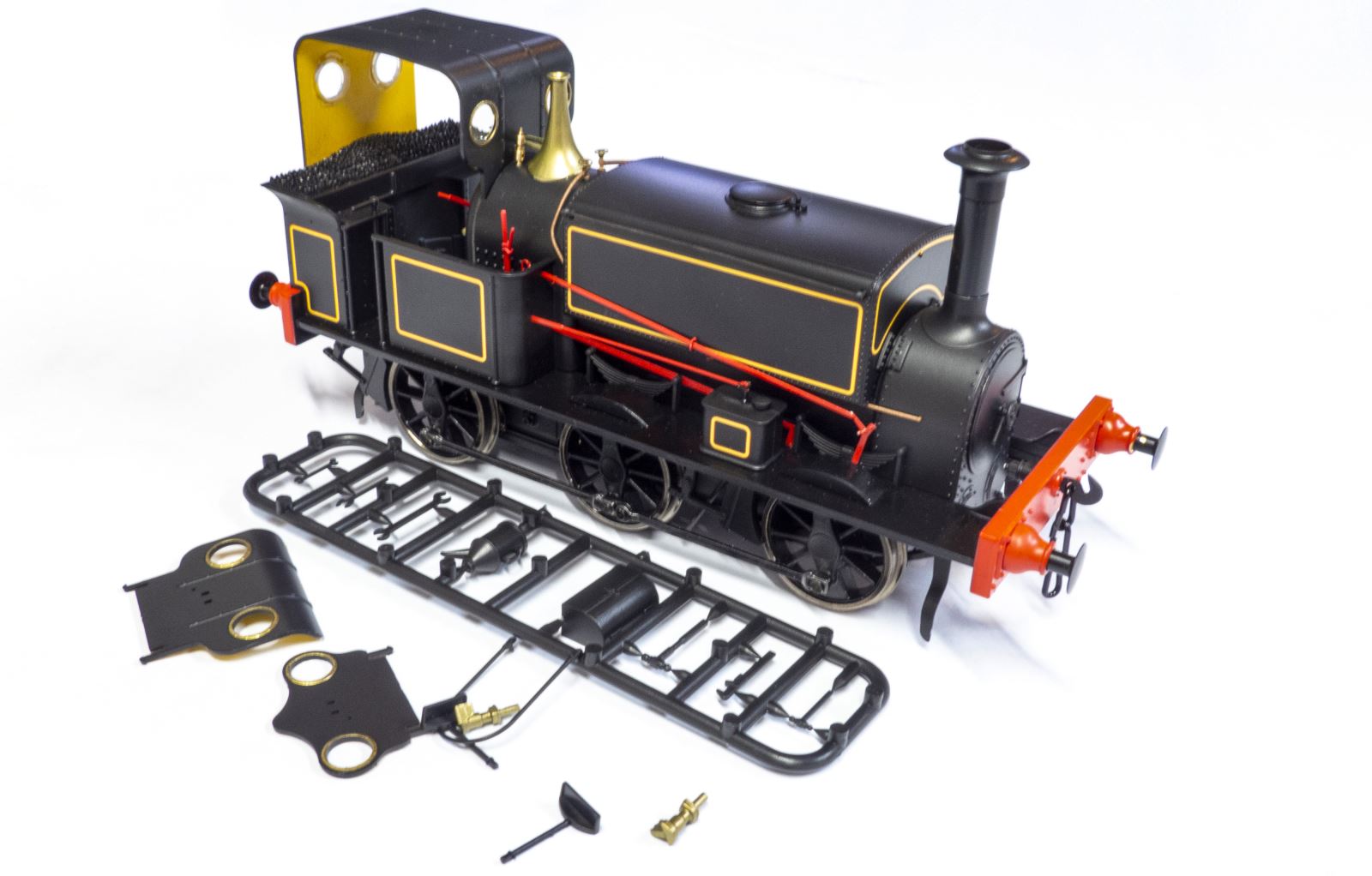 Minerva's 'K' Class from the box, complete with accessories and standard tool sprue. A fine model of a diminutive locomotive.

Out of the box

The small size of Minerva's model is surprising. These are very small locomotives and in 7mm:1ft scale that equates to just 152mm from buffer to buffer. The boiler is compact too, requiring the motor and gearbox to be placed inside the firebox. It presented the manufacturer with an engineering challenge. Unlike previous releases, its new model has a smaller motor. The upshot is that it's hidden and no compromises have been made to the model's chassis. The running plate from headstock to headstock is diecast, suitably reinforced with angle to the front as per the prototype. It's largely this part which, combined with the motor and wheels give this locomotive its deceptively high for its size 469g weight. That's more than enough to haul all the wagons it could handle in reality, whilst negotiating the steepest of inclines. Couplings are three-link, unsprung to the front because of the exposed buffer beam with spring and retaining nut injection-moulded. The coupling to the rear is sprung, though the spring is at an angle and lacks sufficient strength to return it to its resting position if retracted. Buffers are lightly-sprung, with just 1.5mm of travel because of the visible rear of the headstocks.

The body is injection-moulded as you'd expect, with added detail from etched components. There's something quite Wacky Races-esque about the nature of the prototype locomotive - its token cab with exposed sides and small spectacle windows combined with its flared coal bunker and small finescale wheels are humourous. Cab detail is sparse, reflecting the simplicity of the prototype, but crucially it's well-modelled - there's no hiding away here. Each of the spectacle windows has been fitted with a generous amount of glue, though its sheen could be greatly reduced with subtle weathering. The dial of the boiler pressure gauge and water level indicators are beautifully captured. 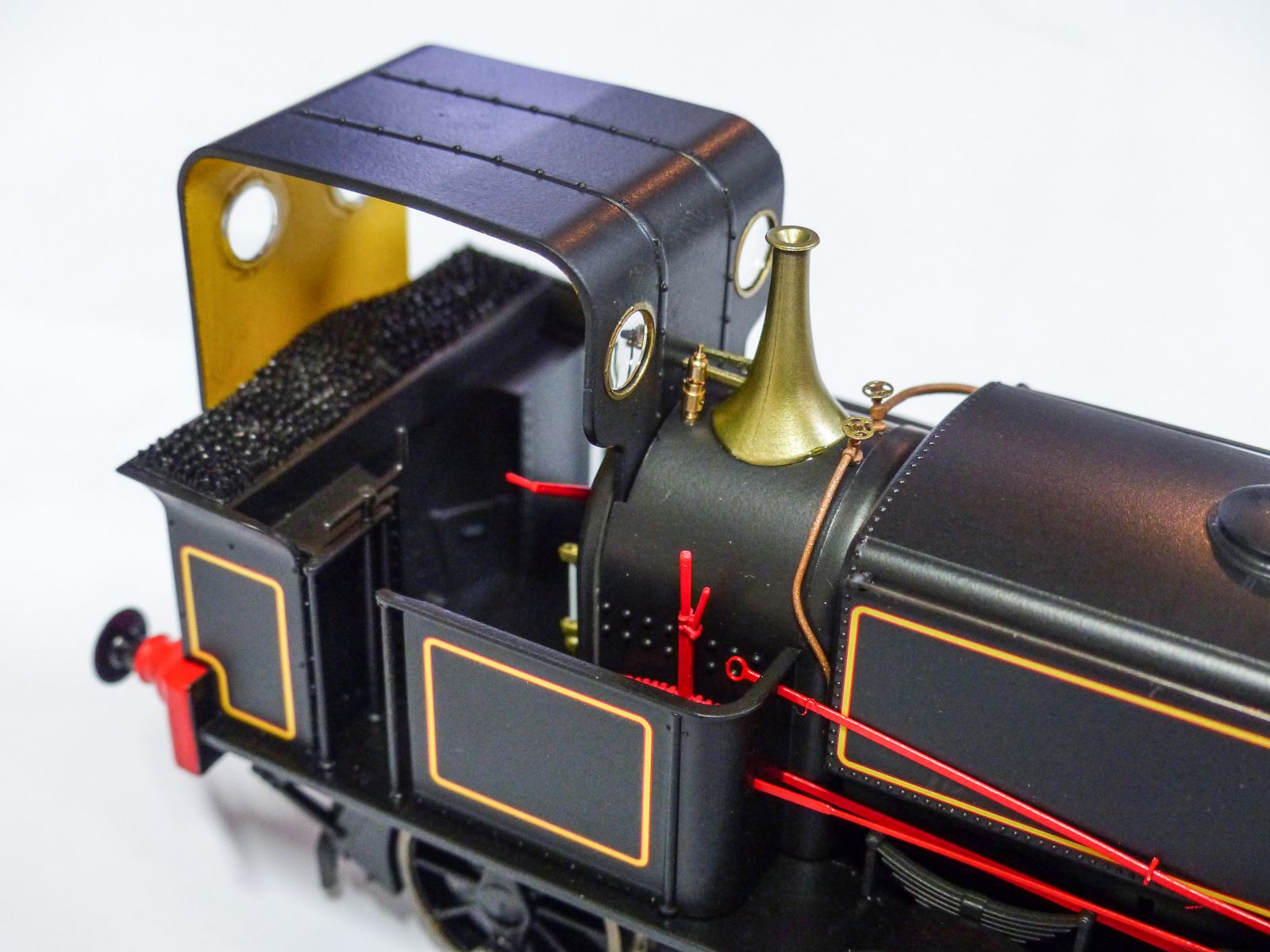 Cab reverser and levers are painted red, a high contrast against the pleasing satin black finish of the locomotive.

Moving further ahead, the curved saddle tank sits well on the model and careful observation reveals it depicts the rivetted panels accurately, each raised from the edges a neat line of rivets. The curved top of the tank appears to have been formed from multiple flats and this shows through the paint as a series of lines running fore and aft along its top. the turned brass chimney is accurate and smooth, though it appears the factory airbrush didn't quite reach the inside of the chimney where the brass shines through. Atop the boiler sits a beautiful whistle, again, turned in brass, whilst external boiler feed pipes are injection-moulded items, fitted with individually-applied circular handles. Such is their size, you'll only notice them from close quarters. To the sides, the painted etched metal of the levers from the reverser and sanding gear are noticeable, though - as always - handle with care to prevent damage.

Phosphor-bronze pickups for the model are completely hidden from view, tucked up below the arches on all wheels. The gearbox is well-hidden, the 40:1 ratio coupled with the small diameter of the wheels provides useful slow-speed running. The rear axle is driven and the gear train can be serviced by removing four screws that retain a keeper plate. Compensation in the centre axle ensures the locomotive can handle small track irregularities without losing contact.

The livery on our sample is black with red and yellow lining. Other liveries include lined crimson and lined dark blue. It is a good a finish as we've come to expect on an RTR model, though I witnessed a few very small specs of dust underneath the paint on the diecast headstocks at close quarters. It's hardly a cardinal sin and if you plan to even lightly weather your model, you've nothing to worry about. An injection-moulded representation of the coal in the tender is perhaps a little underscale for the typical size of coal pieces, though replacing it wouldn't be too difficult. 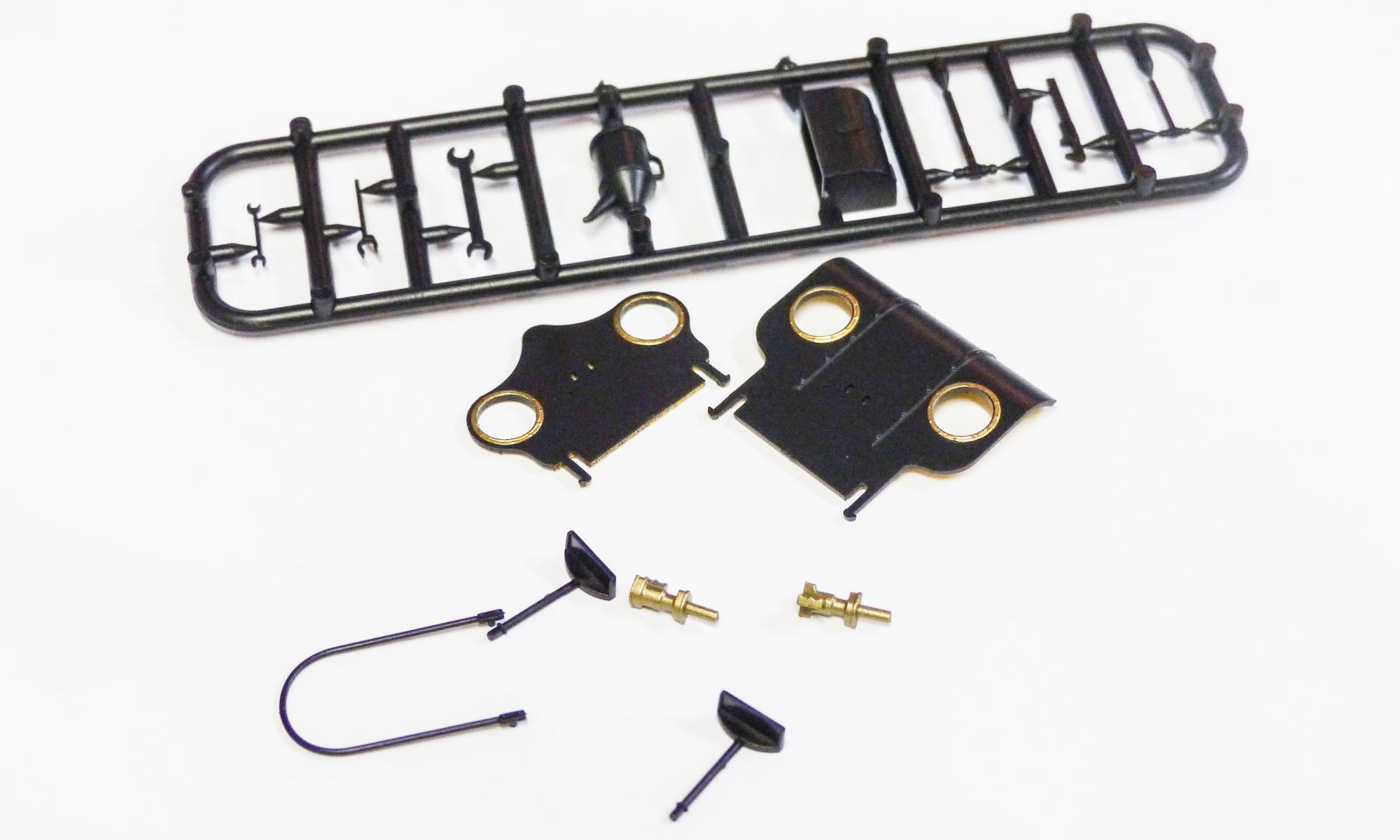 Spectacle plates (or weatherboards) are primitive for this early six-coupled locomotive. Clack valves and cab steps are supplied, ready to fit.

Supplied in the accessory bag are two weatherboards for roof-less cab variants, what protection these could possibly have offered the crew is open to debate. For those who want to fit these, Minerva recommends getting in contact for guidance, but for the most part it will require removal of the cab by applying white spirit to glued parts until they break free. A standard Minerva sprue containing an oil can, tool box, hammer, spanners and an adjustable wrench is provided, ideal for placing inside the cab for extra detail. Brass-painted clack valves are provided, though it is recommended these are fitted using a soft adhesive such as UHU because they must be removed if the superstructure is to be lifted from the chassis. Cab steps are supplied unfitted, a wise move because these are extremely fragile items. Their square nature and cutout in the running plate makes their fitment straightforward.

For compact and industrial layout fans in O gauge, the future looks very bright with continued RTR support. Minerva's latest addition is useful and will sit as well on an industrial layout as it will help a mainline interchange. Read the full review in the June issue of BRM, on-sale May 23.