DCCconcepts has released a new range of decoders - the Zen black range. Howard Smith explains how they're different to other decoders on the model railway market.

DCCconcepts' new decoder range offers modellers more automation than ever on their layouts. Arriving in the office this week (and with DCCconcepts stockists) is its new Zen V12 Black 21pin + 8pin six function decoder. The decoder will accept ABC braking and one-step setup is included as standard. The decoder is also available as a 21pin + 8pin, four plus two function version. Furthermore, both versions also available with an ABC module included. At this point, if your knowledge of DCC is a little weak, you might be wondering an ABC module is and the difference between a six function decoder and a four plus two function decoder. And, one-step setup - what's that all about? Here's our explainer...

Automatic Brake Control (ABC) is a system which will slow a locomotive when it enters a section of track, automatically. This could be at a signal, a terminus, a junction or anywhere you want a train to stop automatically. ABC was developed by Lenz but has been adopted by other manufacturers. It isn't part of a DCC standard, but provisions have been made to accommodate the feature in the DCC standard as an optional feature. ABC-equipped decoders will operate normally on a standard DCC layout, and standard DCC locomotives will operate normally - although these won't stop automatically. Only decoders which are ABC-ready and have the function enabled via the appropriate CVs will respond to automatic brake control.

Some ready to run locomotives are DCC-ready. This means they are fitted with a DCC plug, ready to accept a DCC decoder and its wirning harness. Most of the time the locomotive manufacturer will specify which decoder socket is installed, which enables you to make your decoder choice easier. If the locomotive is an older model, it might not be supplied with information on which decoder socket is installed. DCCconcepts' Zen 218 offers 21-pin and 8-pin connections in one decoder. There's a fair chance you'll need either a 21-pin or 8-pin decoder and the Zen 218 takes away the worry over decoder choice by incorporating both 21-pin and 8-pin in one decoder. The decoder has six 100mA light functions, and a 750mA / 1A motor drive.

Having read many reviews of ABC braking performance in decoders, DCCconcepts found there was little consistency in the way they performed, with only one way to trim slowing or stopping speeds in each brand. It was also clear that while basic ABC implementation by the user was easy to do and relatively low cost, a little more thought needed to be put into the triggering and activation of ABC, so that it was not necessary to think about “Left and Right rail”, to cut more than one rail at any time OR to re-wire an ABC trigger device if it was inadvertently installed backwards.

Most importantly, ABC seemed to be a limited functionality option - and any extended ABC use in other brands always seemed to require an expensive add-on device. DCCconcepts wanted an adjustment of ABC with slow down and stop, intermediate running speeds and acceleration rates/distances, plus adjustable slow down and stopping sections for automation of terminal station stopping, automatic storage and fiddle yards or even simple and direct signalling integration via ABC for those who wanted it.

DCCconcepts have said "We are especially proud of our fully internal unique self-contained automated DCC-shuttle ability. You can have a simple end-to-end shuttle with adjustable stopping time, or choose to pre-set the number of station or other stops that your train will make - all with simple CV changes that can even be adjusted while the train is running. All you will need is a Zen Black decoder and a low cost ABC control board to control each action. There isn't a need for any external controller or computer interfacing at all. Of course, it works perfectly with all DCC-compliant / compatible controllers. We did not forget to look at Brake on DC abilities with Zen BLACK either... Our Zen Black software even contains a simplified Brake on DC ability that makes this legacy approach to braking much. easier to implement. It works with only ONE rail cut, and does not need any complex rectification or secondary switching. Using our new approach and the simple BODC board we have created, locos with a Zen Black decoder set to Brake on DC now transit section boundaries smoothly and respond only to a correctly oriented rectification. This makes Zen “Brake on DC” an excellent choice for single track, bi-directional main lines if you do not want to use ABC." 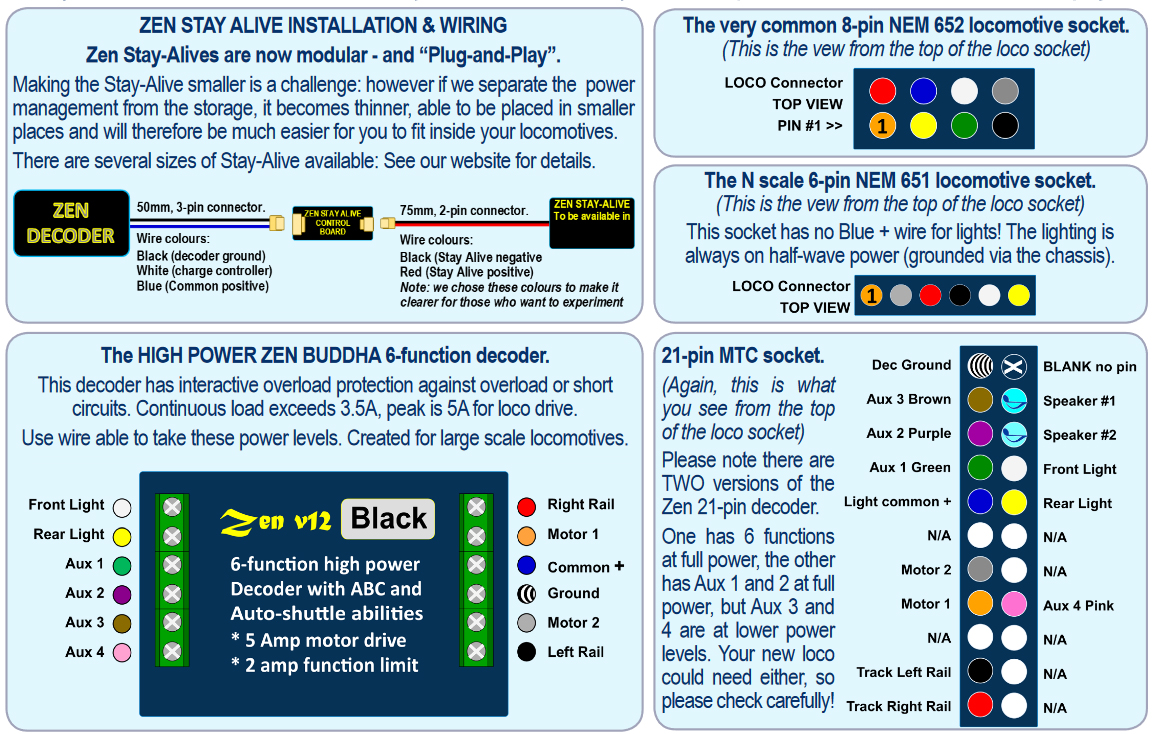 DCCconcepts decoders are pre-wired for connecting to its stay-alives. The three wires will connect to its selection of plug-and-play capacitor banks of varying sizes, each suited to fill a space in your locomotive. A stay-alive provides the decoder with power should the DCC decoder lose power. As such, dirty or faulty track or problematic short-wheelbase locomotives that don't run smoothly become a thing of the past.