The project to build new Gresley class P2 steam locomotive No. 2007 Prince of Wales has taken a step closer to completion with the delivery of its front pony truck, following its fabrication by North View Engineering Solutions (NVES) in Darlington.

The pony truck is a single-axle bogie which pivots towards the centre of a steam locomotive to enable it to negotiate curves more easily. The A1 Steam Locomotive Trust has also announced that construction progress has passed the two-thirds point with around £3.4M spent and over three-quarters – £3.8M – of the estimated £5M required donated. 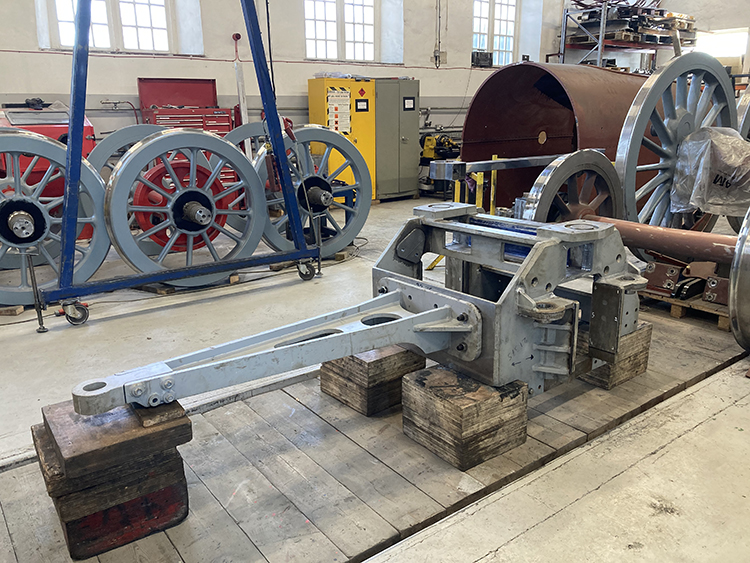 The Gresley class P2 2-8-2 ‘Mikados’ were the most powerful express passenger locomotives to operate in the UK. They were designed by Sir Nigel Gresley in the 1930s for the London & North Eastern Railway (LNER) to haul 600T trains on the arduous Edinburgh to Aberdeen route. Sadly, the design was never fully developed, and they were rebuilt by his successor Edward Thompson into A2/2 4-6-2 ‘Pacifics’ in 1943/4 and scrapped by 1961.

The A1 Steam Locomotive Trust (A1SLT - registered charity and builders of famous new 100mph steam locomotive No. 60163 Tornado) is building the seventh member of this class at its Darlington Locomotive Works (DLW) over ten years, at an estimated cost of over £5M through its P2 Steam Locomotive Company subsidiary.

Despite the impact of COVID-19, progress on the construction of the new Gresley class P2 ‘Mikado’ continues to move forward rapidly. The locomotive has reached the condition where it is recognisably a P2 and the structurally complete tender tank and tender wheelsets are now at Darlington Locomotive Works. Construction and assembly work continue on all fronts, including boiler, wheelsets, tender frame, heavy motion, pipework and electricals. Design work for the extensively modified and improved cylinder block is complete, with the focus now turned to adaptation of the Lentz rotary cam poppet valve gear to further improve the original design.

Now that the pony truck frame has arrived at DLW, the next steps include continuing the Finite Element Analysis (FEA) study for approval of new design, manufacture of spring gear details, final assembly of the cannonbox onto the wheelset and the machining of the spring planks & bearer cup and spherical side bearers.

In April 2020, the Trust announced that it had launched a new £20,000 appeal – The Pony (Truck) Club – to fund the manufacture and certification of the leading pony truck. This mini-club galloped away and soon passed its initial target, and the Trust decided to extend the club by a few members to cover the considerable certification costs associated with the modified pony truck design.

Steve Davies MBE, Chairman of The A1 Steam Locomotive Trust, commented, "The delivery of the pony truck frame to Darlington Locomotive Works is yet another key milestone in the £5M project to build new Gresley class P2 No. 2007 Prince of Wales. It is a testimony to the forward thinking of our engineering team that some of the original research was conducted during No. 60163 Tornado’s testing on the Great Central Railway in 2008, five years before the formal launch of the project. Fundraising is also moving forward well [and] the project remains on-track for completion within three years. We are delighted with the support the project to build Britain’s most powerful steam locomotive has received since its launch more than seven years ago. However, to maintain this progress we need to raise £700,000 per year and we are still seeking to recruit an additional 60 ‘P2 for the price of a pint of beer a week’ regular donors or covenantors."

For further details on the project, visit the P2Steam website.