The Severn Valley Railway is taking the unusual step of renaming and repainting one of its home-based steam locomotives.

Heads are expected to be turning at the Severn Valley Railway (SVR) later this year, as computer-manipulated images emerge of a planned repaint of 34027 Taw Valley in a unique purple livery. Celebrating the Queen’s Platinum Jubilee and the Commonwealth Games, the SVR is taking the unusual step of renaming and repainting the locomotive for a limited time period.

The name change and repaint on 34027 Taw Valley will be temporary, and later in the year, the locomotive will be restored to its original name and livery. “This is all about making the biggest impact possible,” said SVR chairman Mike Ball. “We’re putting a huge amount of effort into our celebrations for The Queen’s Platinum Jubilee and the 2022 Commonwealth Games which are being held in Birmingham. We’re sure that the unusual appearance of the locomotive will prove a huge draw to visitors.”

“The sight of a purple steam locomotive might not appeal to all heritage enthusiasts, but it’s certainly going to cause a stir amongst the visiting public, and we’re aiming to stimulate maximum interest in heritage rail amongst the widest possible audience this year.”

This won’t be the first time that the West Country class locomotive has appeared in an unconventional livery. In 2000, it was turned out in maroon and carried Hogwarts Express nameplates to promote J K Rowling’s Harry Potter books, appearing at signing events throughout the UK. Taw Valley never made it onto the silver screen however, as the film producers chose 5972 Olton Hall instead. The temporary new name for the locomotive will be chosen by public vote. 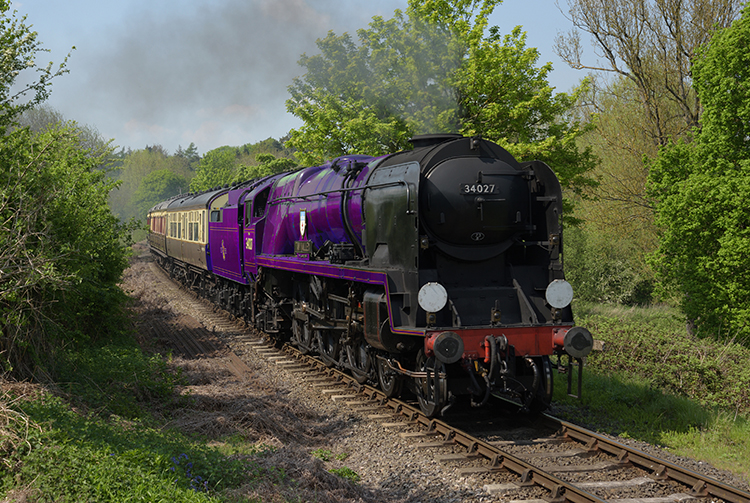 Almost 1,200 entries were received in a competition for the new name, and a shortlist will be put to the public vote on Monday February 14. The name will be cast onto authentic name plates, which will be affixed to the locomotive. The SVR’s head of engineering Martin White gave details of how the transformation into purple will take place.

“Taw Valley is booked in for its annual boiler exam in early February, and following its steam exam will enter the paint shop at Bridgnorth. We expect to have the repaint completed by early April. “The locomotive was starting to look a little weather-beaten. With three years still to run on its boiler ticket, a smarten-up was a good idea to avoid further deterioration and enable maximum use of it.”

Taw Valley will be returned to its BR green livery later this year. There will be an opportunity for this in the autumn, when the locomotive will undergo scheduled maintenance for a significant valve and piston examination. The locomotive’s owners are supportive of the temporary name and livery change.

Speaking on behalf of his fellow owners, SVR director Phil Swallow said, “We’re delighted that Taw Valley is going to play such a prominent role at the SVR in 2022. The rename and repaint will be a very fitting and memorable way to celebrate two extremely important occasions this year. Ultimately, this is a hugely fun thing to do, and while it might upset some people, it will contribute significantly to our celebration of these important events and will attract many visitors to the SVR.”