Produced by the manufacturer for Locomotion Models' National Collection in Miniature series, two exclusive wagons are to be released.

Locomotion Models has revealed plans to release models of the first and last Merry-Go-Round (MGR) coal wagons in a partnership with Cavalex Models.

Images have been shared of pre-production samples and aren't necessarily representative of the final models. Some parts are missing, including the four cross braces on the original bodied version. Further images of the forthcoming are said to be issued soon. The wagons will incorporate the following features:

Under the TOPS (Total Operations Processing System) coding system introduced in the 1970s, these wagons were classified as HAA wagons and initially carried B numbers working between colliery and power station. They enabled automatic loading and unloading on a continuous cycle for which collieries and power stations were usually fitted with dumbbell loops to aid the process undertaken at crawling speed. 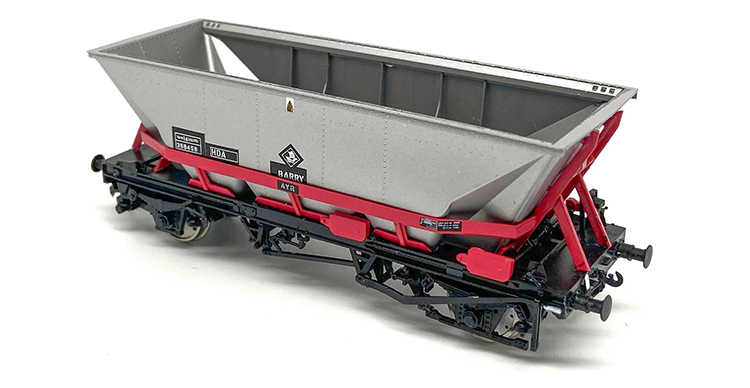 The final wagon constructed, No. 368459 coded HDA, and representative of the prototype constructed at Shildon in 1984.

The 32T wagons could run at 45 mph loaded and 55 mph empty. Two prototypes were built at Darlington Works in 1964. 160 production wagons were built at Ashford Works on the Southern Region, while the remaining 10,702 were built at Shildon Works before its closure in 1984. Locomotion Models is producing the first prototype wagon No. 350000 which was built at nearby Darlington in 1964. It was preserved to become part of the National Collection in October 1995 and is currently on display inside Locomotion at Shildon. The second model is of the final production wagon No. 368459 built at Shildon in 1984. It was purchased by The Friends of The National Railway Museum due to its links with Shildon Works and is currently stored at Shildon.

For further details on the models, including pricing and availability, visit the Locomotion Models website.