This year sees the 60th anniversary of the opening of the Lincolnshire Coast Light Railway on its original site at Humberston, south of Cleethorpes and as part of the celebrations, the railway company and the LCLR's Historic Vehicles Trust are presenting a “Parade of Simplexes” on Saturday 6th June 2020 on the line at its present location in the Skegness Water Leisure Park.

The event will be an opportunity for photographers, railway enthusiasts and those interested in Lincolnshire's history and heritage, to see locomotives and wagons not normally on view, or in use. It will demonstrate the military, agricultural and industrial use of narrow gauge railways. Lincolnshire had more of these railways than many counties and they were an essential, but largely unknown part of the county's life, with a fascinating history.

Public passenger trains will not be running during the event. No charge will be made for the event, but donations can be made to the Lincolnshire Coast Light Railway Historic Vehicles Trust (registered charity no. 514443) on the day.

Lineside photography will be allowed, providing photographers follow the Skegness Water Leisure Park's rules regarding the active airfield alongside the Railway. (Normally, access is restricted). 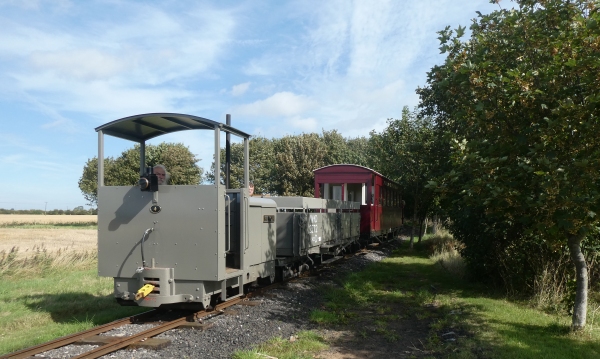 There will also be an opportunity to find out about becoming a volunteer as a member of the LCLR Historic Vehicles Trust and helping to maintain and operate the railway.

“Motor Rails Through the Decades” will feature the 20 hp “Simplexes” hauling era-specific rolling stock from the collections of both the LCLR Company and the LCLR Historic Vehicles Trust. The oldest example will be “Nocton”: Motor Rail's works number 1935, built a century ago, coupled up to ex-War Department Light Railway “Class P” 4-wheel wagons, running as they did on the Nocton Estates Light Railway from 1920 to 1969.

Other demonstration trains will include locomotives and wagons from ammunition depots, brickworks, timber yards and peat works systems. There are nine “Simplex” locomotives on site, dating from 1920 to 1947. It is hoped to run all those in working order, with the others on show.

Organiser Jim Smith, Secretary of the Trust said: “'Simplex' narrow gauge locomotives were devised by the Motor Rail company of Bedford, for use on the trench railways of the World War One battlefields, supplying troops, ammunition, medical supplies and fodder to the field of battle. They helped evacuate the wounded for treatment in field hospitals and for recuperation in the UK.

“They were solidly built, with petrol engines and could be driven in either direction on the 60 cm gauge track. They were a decisive factor in the Allied victory in 1918. Many were sold to industry and agriculture after the Armistice with their petrol engines eventually replaced by diesel”.

More about the Lincolnshire Coast Light Railway on www.lclr.co.uk