150 years ago, railroads from the east and west of the USA met, completing the transcontinental line. To commemorate this, a golden spike was hammered into the last sleeper as two locomotives faced each other. LGB's new set allows modellers to recreate this momentous moment in American history.

Last week, at the Garden Railway Specialists LGB day, Matt Adamson of GRS and Pete Binger of The Hobby Company who represent LGB in the UK, launched the set with the first production models.

The set consists of two steam locomotives modelled on those at the opening of the first transcontinental railroad in the USA. The construction, paint schemes, and lettering are the same as the two replicas - Union Pacific RR locomotive "119" and the Central Pacific RR "Jupiter" locomotive presently are at the memorial site at Promontory Summit in Utah. 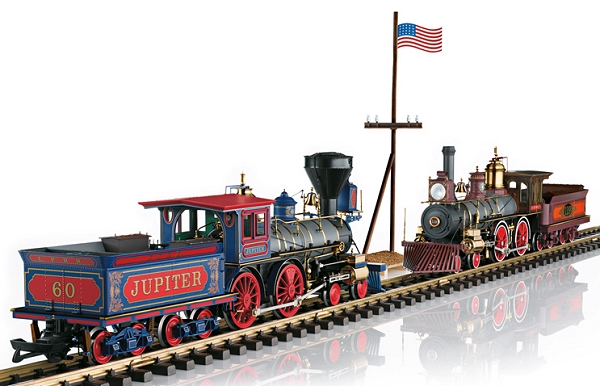 These are finely detailed metal models with many separately applied details. Each locomotive is driven by a powerful motor, has an mfx/DCC decoder with many light and sound functions such as headlights, cab lighting, firebox lights, and much more. The running sounds and a whistle and bell activated by reed switches will also work under analogue operation. Each locomotive has a built-in smoke unit with steam exhaust synchronized with the wheels as well as cylinder steam and steam exhaust at the whistle.

A reproduction of an American track spike – constructed of metal and genuine gold-plated – is included with the models. In addition, there is also a flagstaff to go on the locomotives and it includes an American flag.

Only 299 sets will be produced.

More details of this set can be found on the LGB website.