N gauge 03179 in Network SouthEast livery, unofficially nicknamed ‘Slug’ on the Isle of Wight, arrives in stock with the retailer.

Kernow Model Rail Centre has revealed an exclusive model commission from Bachmann Europe. An N gauge Class 03 diesel shunter in Network SouthEast livery has arrived in stock with the retailer, and is available to purchase.

The Class 03s were introduced between 1957 and 1962. With 230 built, the type was one of BR's most successful small 0-6-0 diesel-mechanical shunters and was adopted its standard small shunter. Weighing 30T, 18T less than the Class 08 diesel shunter, the Class 03s were fitted with Gardner engines and their distinctive jackshaft drive arrangement gave the locomotives a top speed of 28½ mph.

Despite their usefulness, a downturn in shunting requirements meant that withdrawals began in 1968, although the last remained in service on mainland Britain until 1987. 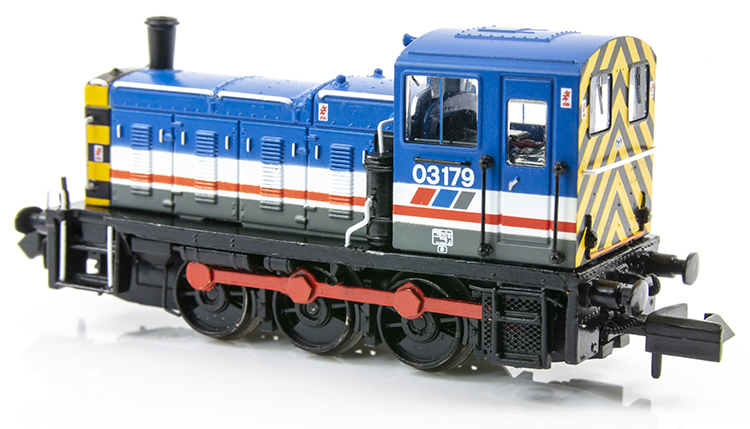 03179 operated on the Isle of Wight on June 30, 1988, where it gained the Network SouthEast livery, and remained in traffic on the island until 1993. It was later resurrected by West Anglia Great Northern in 1998 to shunt its Hornsey Depot and named Clive. Subsequently operated by First Capital Connect, the locomotive was finally withdrawn in 2008 and preserved, at Rushden, Higham and Wellingborough Railway, bringing the total number of surviving examples to 56.

The Kernow Model Rail Centre Exclusive detailed model in N gauge is being produced for KMRC by Graham Farish. The model features the latest chassis design with a powerful coreless motor and easy decoder fitting via a 6-pin DCC socket. The detailed body shell incorporates many separate components including the ‘flower pot’ exhaust, lamp brackets and metal handrails.

The recommended decoder is the new Bachmann 6-pin micro (36-571) which will fit into the limited space available. For current pricing and availability, visit the Kernow Model Rail Centre website, or visit its Camborne or Guildford stores.