First tooling shots, an assembled prototype and livery artwork are unveiled by the Margate company, as component 'fit and finish' testing commences.

The Hornby Development team’s new tooling projects are arriving thick and fast, as revealed in the latest update to its Engine Shed blog. Its models of W1 'hush-hush' see visual progress, with sprue parts received from the factory which are now undergoing testing for fit and finish by its development team: 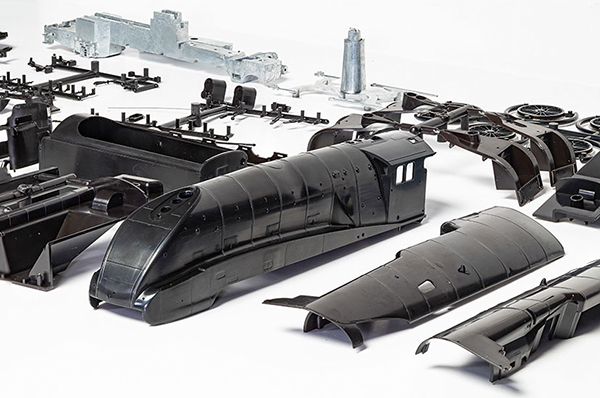 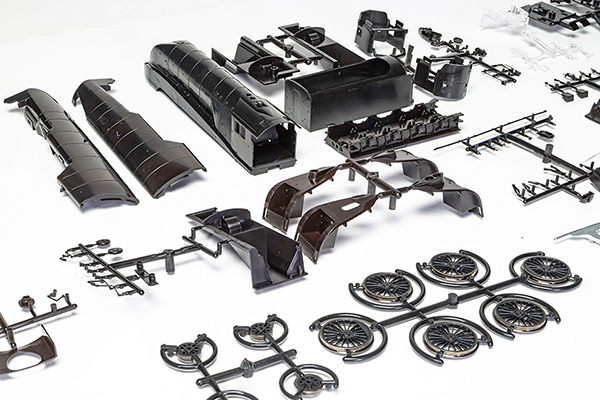 A ‘flat pack’ W1. The designer will work through these ‘first shots’ checking for fit, potential defects and the representation of details.

The manufacturer has made it clear that the images of its W1 represent the first engineering examples that have been received, hence don't represent the final builds of the models. Refinements to tooling and fit and finish might take place and erroneous items may have been fitted to test the build.

A Hornby designer will methodically work through the sprues, checking each item against its corresponding tooling reference and making notes for improvements on a master worksheet. Hornby explained "The first running sample will typically follow a week or so after the ‘first shots’ have been received and will arrive assembled. This sample will be run extensively across the Hornby development layout, in both analogue and DCC configurations where haulage will be assessed along with running quality, motor performance, speed and gearing. The information gleaned from this extended testing will be fed back to the vendor, along with running videos and details of any modifications deemed necessary so that subsequent running samples will have these improvements included."

Renders of liveries being produced on these models have also been shared...

R3840, in the locomotive’s prototypical livery.

R3841, in the locomotive’s prototypical livery, with the cast ‘British Enterprise’ nameplates that were never applied to the locomotive.

R3843, the prototypical livery carried by 10000 following the rebuild to an A4 streamlined styling.

R3844, the prototypical livery carried by the W1, numbered as 60700 under British Railways, with cut-back valances.

Motors, gears and running characteristics are also being checked, while its packaging designs are undergoing testing by its graphic designers, bringing together the newly-created model images and renders, the copy and the box layouts to create the instantly recognisable ‘red box’.

For further details, pricing and availability, visit the Hornby website.