The final part of the manufacturer's centenary celebrations came to successful fruition with a tour of the Surrey Hills.

Hornby's long-awaited final 2020 centenary celebrations have come true. Owing to the Covid pandemic, its planned trip on the British Belmond Pullman luxury train had to be postponed, but at last came true on April 8, 2022.

In 2020, Hornby celebrated a significant milestone – its 100th anniversary. Alongside its main range of models, it released many new and exciting limited-edition products in retro packaging. As part of a marketing campaign, it released a limited number of golden tickets with models, too. The lucky winners of these gift vouchers which ranged in monetary value could be redeemed against Hornby products, and one of the prizes was a trip on the luxury train, the British Belmond Pullman. Owing to the pandemic, the Pullman train had to be postponed until April 8 this year.

Tim Mulhall, Chief Operations Officer at Hornby Hobbies said, "This was to celebrate Hornby's 100th anniversary. We put golden tickets in the commemorative models that were sold in 2020. The lucky ticket holders joined us on this tour, alongside Hornby developers and brand managers who have helped promote our products." 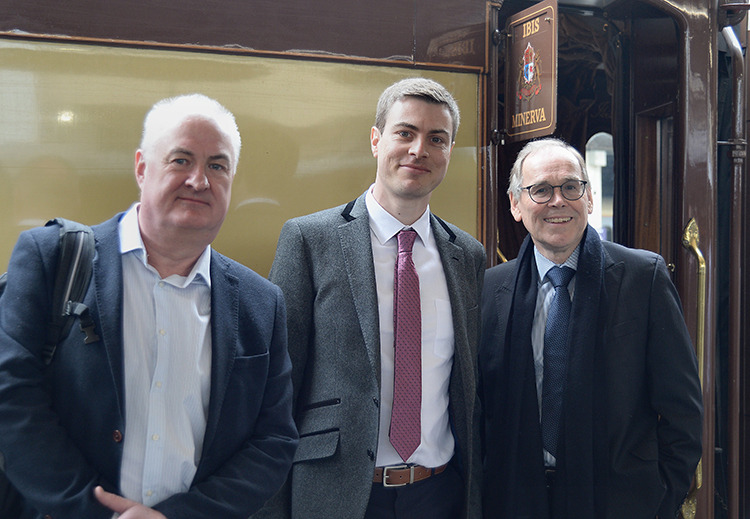 It was my pleasure to be invited to join key members of the Hornby team, aboard this luxury train for a round trip of the Surrey Hills. In charge of our train was Merchant Navy 35028 Clan Line, a regular performer on the service. Departing London Victoria at 11.35am aboard coach Minerva, we sunk into our cosy armchairs. The ambience was excellent, and not just from the company aboard.

Clan Line’s crew were very experienced – there was very little jolting, and the two waiters serving the 26 of us delivered food, and poured wine and champagne along the journey. It was quite an experience! 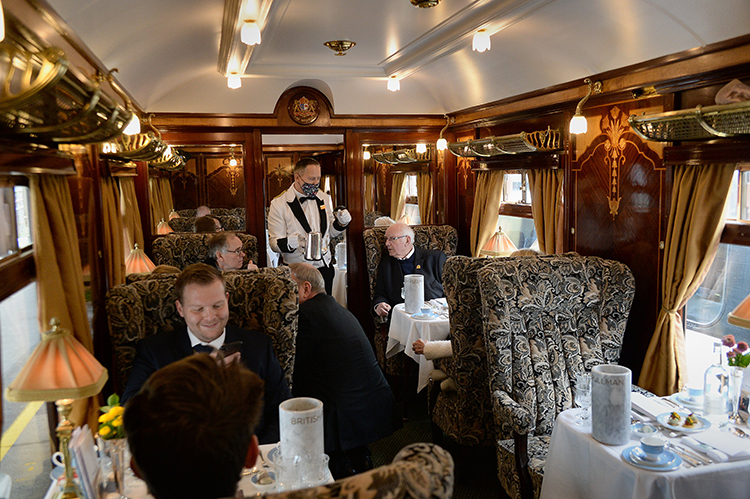 Attention to detail on the coach was splendid, from the marquetry on the panelled sides, to the table lights – even mosaic tiles on the floors of the lavatories! 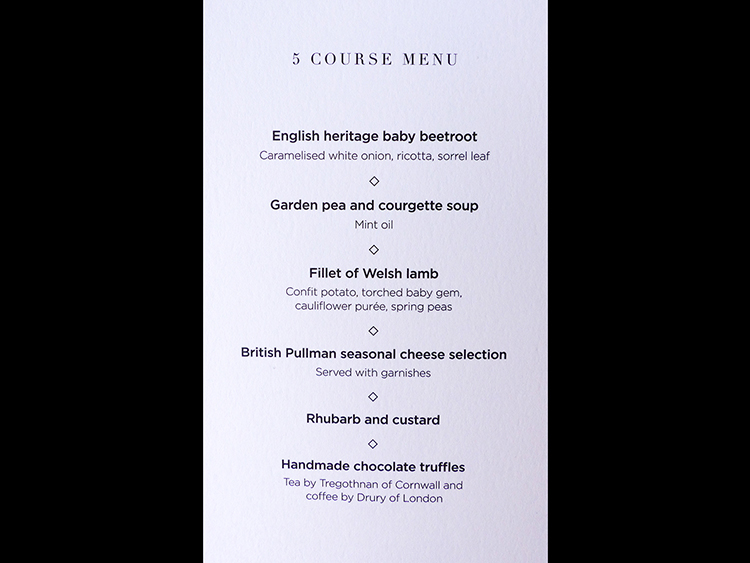 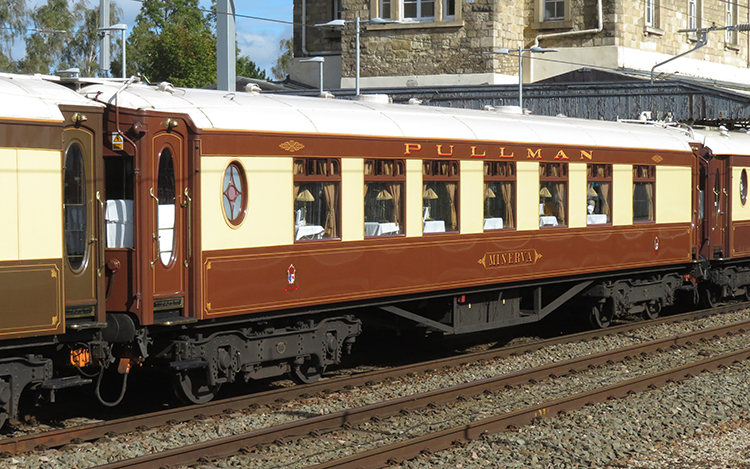 The coach we toured aboard was constructed in 1927. This is the second Parlour First to bear the name 'Minerva', the first having been exported to the Compagnie Internationale des Wagon Lits in 1925 for use on the continent. STEVEN CLEMENTS

Operated by The Merchant Navy Locomotive Preservation society, Clan Line's claim to fame is two-fold – firstly being the first Merchant Navy class locomotive to operate on the mainline in preservation, its second being its claim to have reached an unofficial speed of 104mph passing Axminster, while hauling the Atlantic Coast Express in 1961. 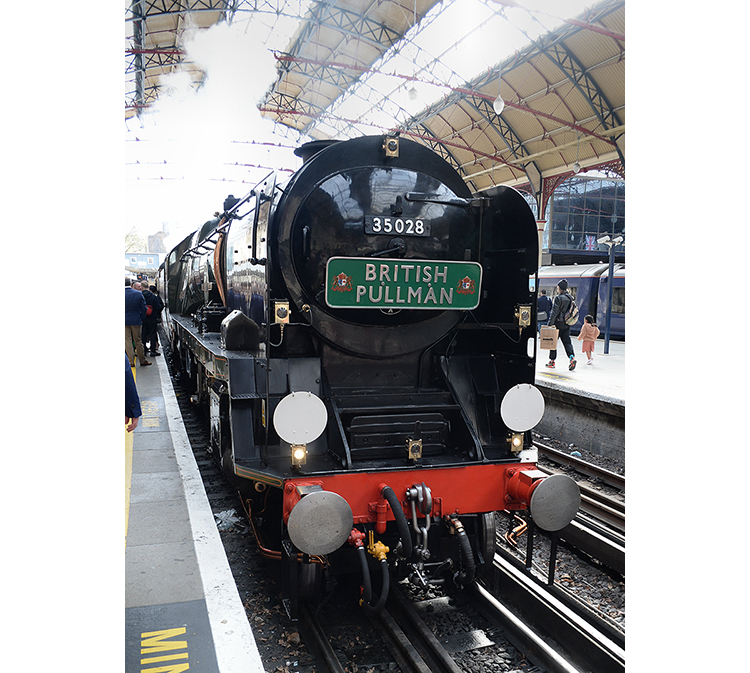 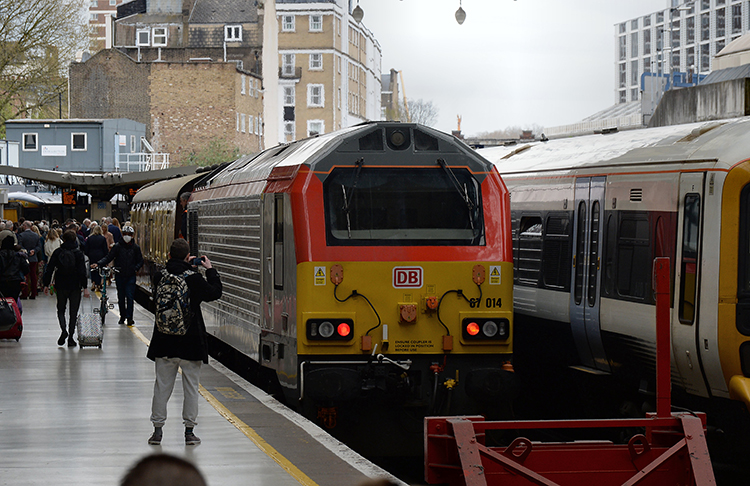 Prior to departure. To the rear of the train was 67014, responsible for stock moves upon our return to London Victoria. This was the first time a Transport for Wales-liveried locomotive has been on the Belmond Pullman train. 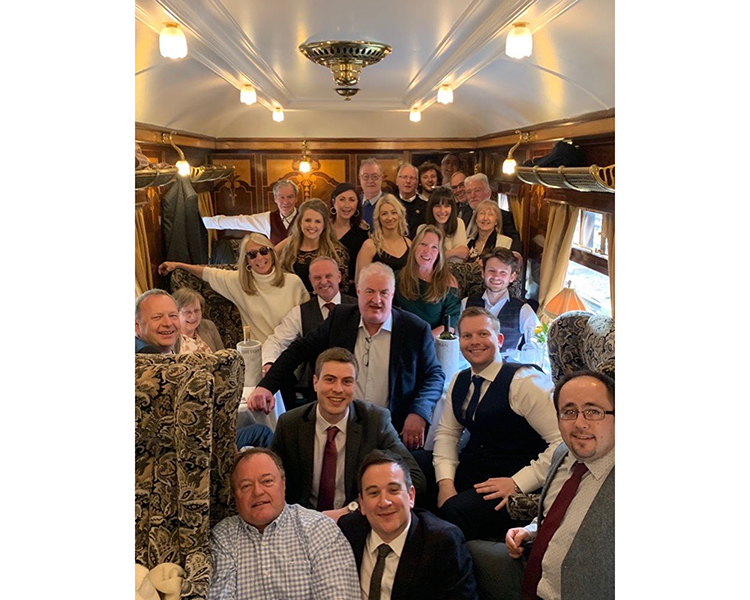 Speaking with the lucky winners of the Hornby Golden ticket, they had an excellent time, as did we! Watch a video of this trip in the May 2022 episode of WOR TV, free to BRM digital readers, and print subscribers.