The manufacturer shares CAD images of its new 'diesel dinosaur' project – the North British diesel prototype 10800, with delivery of models expected in 2023.

Ahead of its return to the exhibition circuit at Model Rail Scotland in Glasgow this weekend, model manufacturer, Heljan has unveiled a new diesel-outline model for OO gauge, depicting the North British 'Bo-Bo' prototype 10800.

Following on from its previous OO gauge prototype diesels, such as Lion, Kestrel and DP2, 10800 is to be produced in limited quantities across four versions depicting the NBL machine in post-1954 SR/LMR and final BR condition with later external modifications. 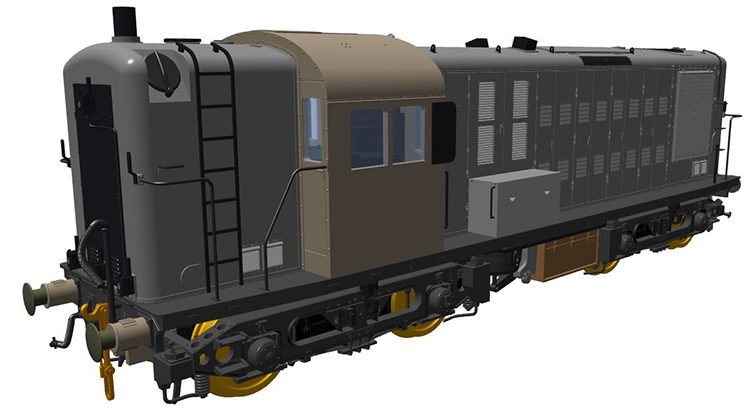 10800 in mid-1950s condition with revised bonnet vents and original ladders.

Built in Glasgow by NBL in the early-1950s, 10800 was ordered by the LMS as part of its pioneering investigations into main line diesel traction. It was envisaged as the equivalent of 3MT tank locomotives for lighter passenger and freight work and fitted with an 827hp Paxman diesel engine. Eventually delivered to BR in 1952 it was tested on the London Midland, Southern and (briefly) Eastern Regions. After withdrawal by BR in 1959 it was sold to Brush and used as a testbed for new traction equipment before being scrapped in 1976.

Based on original NBL drawings and extensive research of the pioneering locomotive, CAD work is said to be complete, with tooling underway. Four versions will be available on general release depicting 10800 in different stages of its life:

For further details, including pricing, see your Heljan stockist, or visit the Heljan stand at Model Rail Scotland at the SEC in Glasgow this weekend.