Hornby granted us access to a pre-production model of its A2/2 60505 Thane of Fife. Keen to test its performance, Tony Wright shares his first thoughts on the new model.

This is a ‘proving’ model to test livery application and performance. I have to express a personal interest, since I assisted Hornby (in a modest way) with the design and development of this exciting new RTR ex-LNER Pacific. Thus, the above stated, this is certainly not a review – my involvement in the project precludes this.

I won’t go into the full history of this controversial class – suffice to say that Edward Thompson had Gresley’s six P2 2-8-2s rebuilt into somewhat ungainly 'Pacifics' during the War, thus rendering them incapable of the work they were once able to do – that is taking, unassisted, 600T trains over the difficult Edinburgh/Aberdeen road. Henceforth, all Heaven was in a rage! Unloved and un-liked, the six were transferred south to England (three to York – 60501-3 and three to New England – 60504-6) where they saw out their days mainly on secondary passenger work and freight jobs.

In 1959, on the withdrawal of 60503 and 60505, they became the first LNER-built Pacifics (other than the Raven A2s) to be withdrawn. At no time, were any two of the six identical. They were endowed with arguably the finest names ever bestowed to British locomotives. Such is the commonality between the two classes (at least with four of the A2/2s), it made sense on Hornby’s part, that the firm produced the RTR A2/3s and A2/2s at the same time.

Because of my ‘interest’ in this locomotive, I can't win. If I say "It’s one of the finest RTR locomotives it’s ever been my privilege to examine", readers might argue "Wrighty’s bound to state that, because he’s helped Hornby". If, on the other hand, I write "I don’t think it’s that good", readers might question why Hornby wasted their time in asking me for assistance?" It’s a great model because of the diligent research undertaken by Hornby’s design team at every stage. Thus, despite the prototype’s ‘unpopularity’, we have here one of the most-outstanding examples of an RTR steam-outline locomotive ever seen in OO gauge.

I can't list all the superlatives, but I can comment that it matches the prototype to scale in every way (other than it being ‘narrow gauge’ because of our OO gauge standards and driven by electricity! Such is the diligence in getting it accurate, this model can only represent Thane of Fife because it carries a Thompson Dia. 117 boiler and only for 1959 when it received a lipped chimney, carrying it through to withdrawal in the November. Hornby has produced other examples which carry the Peppercorn Dia. 118 boiler, which 60501/2/5/6 carried from time to time. The individual accuracy extends to the transposed front numberplate/crossrail on the smokebox door – a feature also displayed on 60506 for a time – the cutting back of the main horizontal handrails from the smokebox front – also a feature of 60501 – and the continuous backing plate behind the sandbox fillers – also a feature on 60504 for a time, but only on the offside. 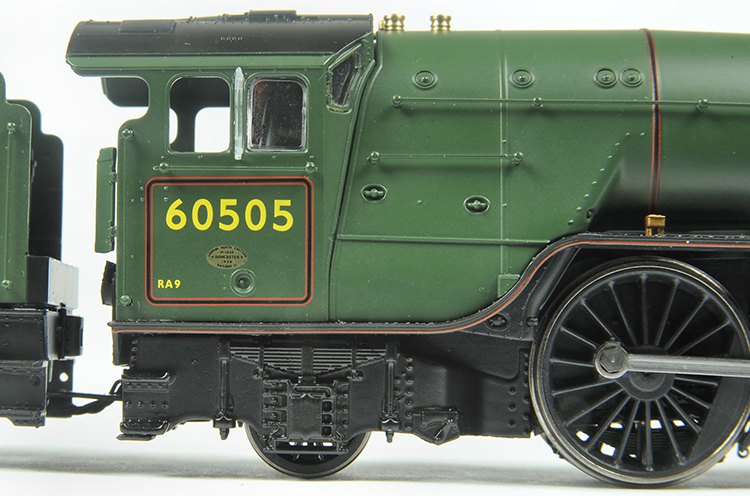 Overall bodywork is exemplary, and the locomotive correctly tows a streamlined non-corridor tender (as did 60503/4/6), something already made by Hornby for its A3s/A4s. 60501/2 towed a high-sided LNER non-corridor tender, which Hornby also makes for its A3s. The livery is perfectly-applied and the chassis is fantastic. All the wheels appear to be accurate representations of LNER types, including the bogie’s wheels – a first for Hornby. The valve gear is far more realistic than previous manifestations, with both return cranks leaning the right way. 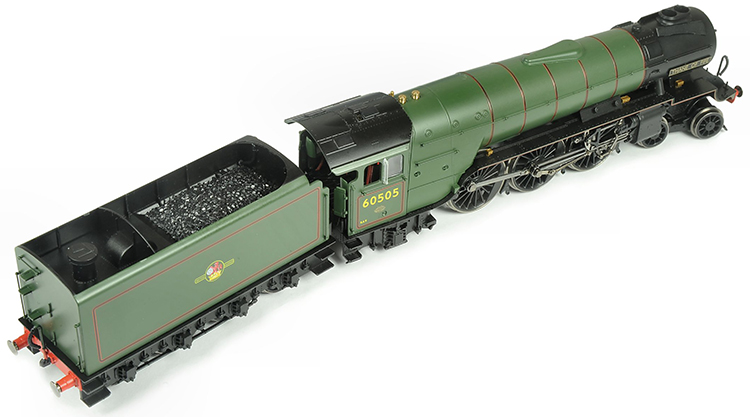 It’s in its performance where it excels, though. On 'Little Bytham', I have few RTR locomotives because they just won’t pull the heavy, kit-built trains I’ve made. No problem with 60505, however. Apart from one 15-car, kit-built metal rake of carriages, the ruler of the Kingdom of Fife breezed away with my expresses. Yes, some slight (but entirely-prototypical) slipping on starting, but off it  went. Slow-running is also beautifully-smooth, quiet and reliable. All wheels are true-round and have consistent back-to-backs, enabling the locomotive to perfectly negotiate hand-built pointwork and Peco. Watch it in action, here.

Since this model isn't mine, I didn’t add any of the extra detail bits supplied – front steps, cylinder drain cocks or brake rigging. I also left the two-position drawbar as it was, on the longer setting. This outstanding forthcoming model is sure to be popular. It’s as good as it gets in my opinion and it’s an immense privilege on my part to have had (a little) input into it. For any latter day ECML steam depiction, an A2/2 will be essential – as will the A2/3s – and, at the RRP, it offers fantastic value for money. I’m sure modellers can’t wait until it, and the A2/3s, are available. I can't recommend it highly enough.

Made a slight slip on previous post,the only A2/2s fitted with 118 boiler were 60501/2/5/6,sorry, but i am certain all the other info is correct,maybe the banjo cover on 60505 could be a shade higher has it was a false cover to hide the round dome,but that would be nit picking.Hornbys mechanisms are getting so much better,with the separate gearbox,and flywheels,like we used in the scalefour society 30 odd years ago,my Princess royals are the best locos Hornby have made so far,superb runners fitted with the tts system,and the build quality is so good .I do hope the new A3s will be has good,after the disapointment of Flying Scotsman in its 1924 empire exhibition model guise,it should have been a great model but it was a disapointment, missing details, just average.they should have finished the loco has the engines in the Nigel Gresley collection,they look superb in the gloss ex works finish,it was a chance missed and a shame.

Can i comment on model and tonys views,1,only 1,3,5,and 6 got the 118 boiler,plus of course the 117 on 5. the tenders were 1,2,new type non corridor nos 5565,and 5575.3,4,5,6,were fitted with streamlined non corridor,nos5576/77/78/79 these were fitted as p2s from new,the only change was no 5 got 5579 and 6 got 5578 in an exchange at cowlairs works in sept 1945 all these tenders were kept to scrap,1,3,4,5,6s had high front copings as A4s,but these were reduced in height in 1948 from 8 foot 6inch to 7 foot 10 inch same has no 2,of interest no 5565 was the only all welded 8 wheel tender built by the LNER.the position of no 5s front numberplate was unique,in 1956 all the numberplates were lowered as the other pacifics to allow lowering of the top lampiron all the other 5 got it across the top hinge except no 5 which just switched wrongly with the handrail.no5 again was the only one with the long sandbox cover plates,but i think hornby have it wrong on no 1 has it did not have any at all from 1950.Now for the glaring mistake i can see,when the emblem was changed to the crest in 1957,nos 3,4,5,and 6 had the one on the right hand side applied wrongly with the lion facing forward,a common mistake by BR at the time,but only 4 and 6 had this corrected,no 3 and 5 went for scrap still in disgrace,if you look at hornbys publicity picture you can see this,i know tonys is a pre-production model but i hope hornby get this right, (Yeadons register,LNER pacifics volume 3 page82) For a class of six from rebuilding to scrap,there were such a lot of changes,i think hornby should have fitted the rimmed chimney,has the cast one they have put on the model ,was only fitted in march 59,the engine was withdrawn7 months later.

The lining on the cab is out of square

The numbers on the sides look a little too yellow otherwise looks good. Remember seeing this loco @ Hatfield just before its withdrawal!