The manufacturer reveals its first engineering prototypes of its forthcoming Caledonian sleeper coaches.

Accurascale has shared images of its first tooling samples for its Mk. 5 'Caledonian Sleeper' coaches, which are said to be undergoing assessment by the manufacturer's design team. It believes delivery of models is likely to be Q3, 2021 at the earliest because of COVID-19, and recent changes to custom procedures which the manufacturer will need to familiarise itself with. Accurascale is set to preview its TPE coaches later this week, which have also been tooled.

A new magnetic close coupling system for between coaches has been developed and is under test. These are said to be easily swapped for tension-locks, Kadees or other NEM couplings, if desired. Tension-locks will be provided to allow coaches to couple up to a locomotive, or, one of the Accurascale magnetic couplings can be used on the locomotive, too. 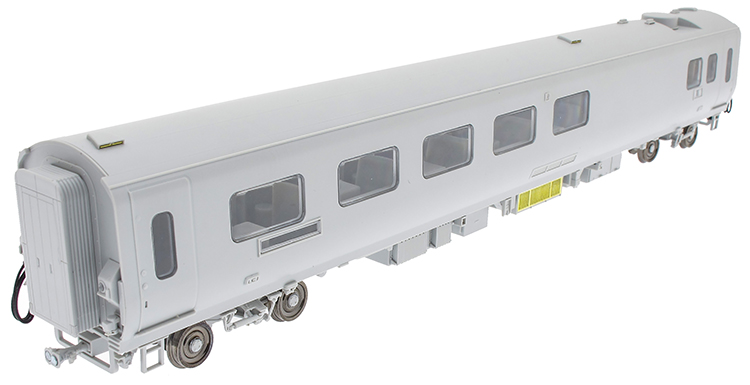 Coaches feature interior lighting which can be controlled by a magnetic wand and is also compatible with DC and DCC layouts. Accurascale commented, "It is nice and subtle, which really sets the coaches off nicely. There are some beautiful touches around the prototypical bogies too, capturing the minimalist nature of the prototypes."

Accurascale's Class 92 and Mk. 5 project were unveiled at Model Rail Scotland 2019, before the real coaches began on Anglo-Scottish services. During this period they were still on test and underwent a number of modifications that Accurascale has said "were essential to capture in model form". This resulted in a delay in completing the project design to ensure the real coaches were better portrayed in miniature.

For more information, including pricing and availability on the four coach packs being made available, or to see its appropriate Class 92, visit the manufacturer's website.