Ferro-Train’s new kit is said to be “very easy to assemble” and includes free-standing models of two of the typical narrow-gauge wagons and a small rail system with a manual turntable. The detailed parts are made of stable nylon plastic, while the lift and the pulleys are designed to function properly. The manufacturer claims that with a little skill and a suitable drive (not included), it could be made operational.

The tower measures 12cm high, with a 5cm square footprint without rails. If rails and turntable are being used, a footprint of 12 x 10 cm should be provided. 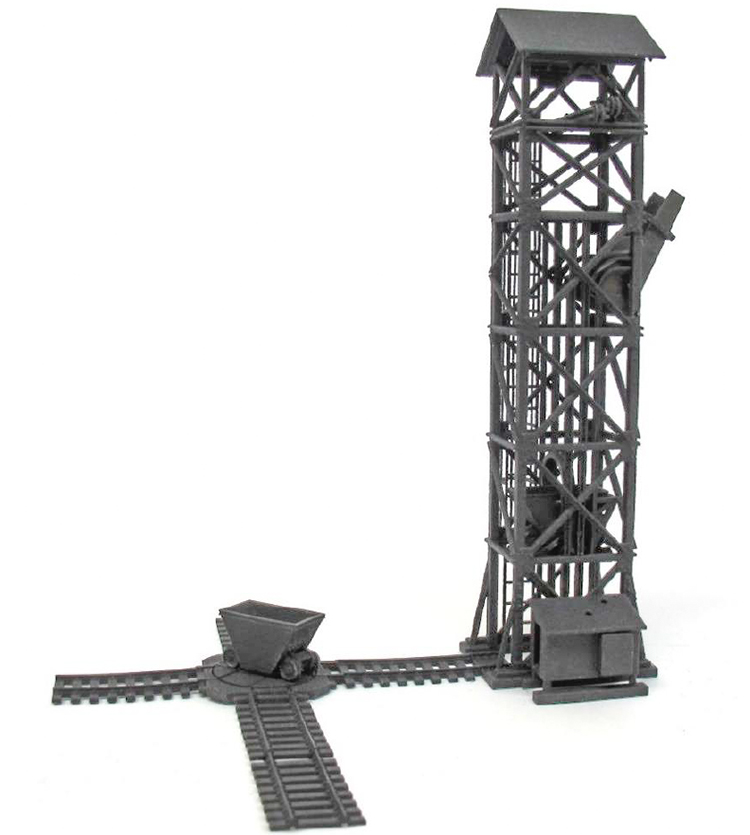 Standardised coaling facilities based on the Teudloff system (Austrian manufacturer) were used throughout the Austro-Hungarian monarchy and some neighbouring countries. The components were strictly standardised, but could be put together differently as required. British modellers might want to adapt the kit to anglicise it and use it on narrow-gauge/standard gauge exchange sidings, around a coal, sand, aggregates operation or even for loading road vehicles.

The model of the ‘Teudloff’ was based on the prototype used in Völkermarkt, Austria. The original was moved to Gmünd´s narrow-gauge station after the Vellach Railway was closed in 1971. When it was no longer used for coaling the steam locomotives in 2014, it was dismantled again and is expected to serve again soon in Ober-Grafendorf.

When in use, the coal supply was shovelled in special lorries (Hunten) and pushed into the elevator by hand. There it was lifted up and tipped over the slide into the tender. The little machine house on the side initially contained a steam winch, which was later replaced by electric motors.

For more details on the new kit, including current pricing, visit the Ferro-Train website.