First images from its tooling of these O gauge wagons are shown, with artwork expected to commence shortly.

Dapol has shared images of its first engineering prototype samples for its HBA and HEA hoppers. Its design team are said to be busy reviewing them at present, while artwork for its liveries is being prepared. The manufacturer expects models to be available in shops during Q1 2022.

Commenting on the images, Dapol said, "Sinkage marks [...] have been identified and measures to correct this are being put in place by the team and the factory. We will bring you more images and news as material becomes available." The samples pictured are subject to change before and aren't representative of production models.

The specification of the wagons promised a die-cast compensated chassis, with finescale wheels and axles running in brass bearing pockets. The injection-moulded plastic hopper body is to feature many separately-added fine details, with sprung metal buffers and instanter couplings.

Earlier in March, the manufacturer previewed the CAD design for its wagons:

Commonly-used – and originally designed for transporting domestic coal to replace ageing 16T, 21.5T, and 24T mineral wagons, in 1975 the prototype 32.5T HBA (360000) was unveiled at Shildon Works, fitted with manually-operating discharge doors and painted initially in bauxite. An order for 2000 wagons to be built at Shildon was placed. 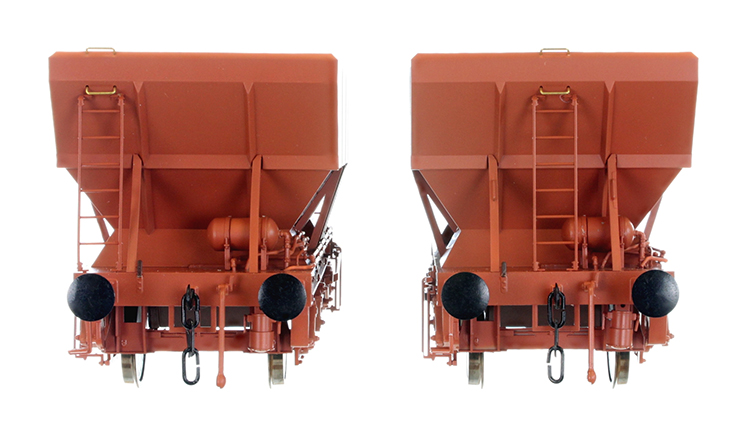 Two small changes to the design were made. The ladders fitted at each end were altered from being centrally mounted to being offset to the left. Bruninghaus springs were fitted to later builds, allowing the maximum speed to be increased from 45mph to 60mph. These were retro-fitted to earlier wagons. The TOPS code of HEA was introduced to distinguish these, with the last 80 or so completed by mid-1985.

The HBAs and HEAs usage was widespread across the country and could be seen in use in mixed and short block trains, delivering household coal to terminals in urban areas. By the latter half of the 1980s, the traffic that the HBA/HEAs were designed for was declining.

New roles for the fleet of wagons had to be found and an early example was carrying rock salt, while another was scrap metal. Another alternative role that commenced at about the same time was the use of HEAs as barrier wagons for nuclear flask trains.

Initially, the bodies were painted brown. This was changed in 1979 with the livery being updated, the top half of the hopper was Railfreight red and the lower half in grey. The re-livery programme was never completed and some rusty brown wagons could be seen in the early 2000s. The privatisation of Railfreight saw new liveries appearing on the HEA fleet, including Transrail grey, Mainline blue, and EWS maroon.

For further details, including pricing and availability, visit the Dapol website.