Revolution Trains has clarified progress on its range of models under development, and has revealed that a new OO gauge announcement is to be made at the DEMU Showcase exhibition on July 23/24.

"So far, 2022 has been a period of some consolidation," said Revolution’s Ben Ando. "The arrival of the IWA vans and timber carriers in OO and N at the beginning of the year, and our N gauge Class 320/321 units in early Spring, saw us packing and posting like never before. However, we are now making good progress on the other items already announced and in development," he added.

In summary, progress on its current projects can be followed, below:

The manufaacturer received decorated samples mid-June and these have reportedly been assessed. Revolution Trains says it will close the order book for these immediately after giving customers the chance to see the models at The International N Gauge Show in September, allowing production to begin.

In May, 2022, Revolution Trains was invited by Freightliner, owners of all the Class 59 locomotives, to visit to its Mendop VMF (Vehicle Maintenance Facility) to carry out sound recording for its forthcoming Class 59 model. The recordings are being processed prior to installation in its DCC sound-fitted models. Haulage tests are also said to be complete and the electronic design has been completed to ensure maximum lighting and operational functionality. Decorated samples are expected shortly. 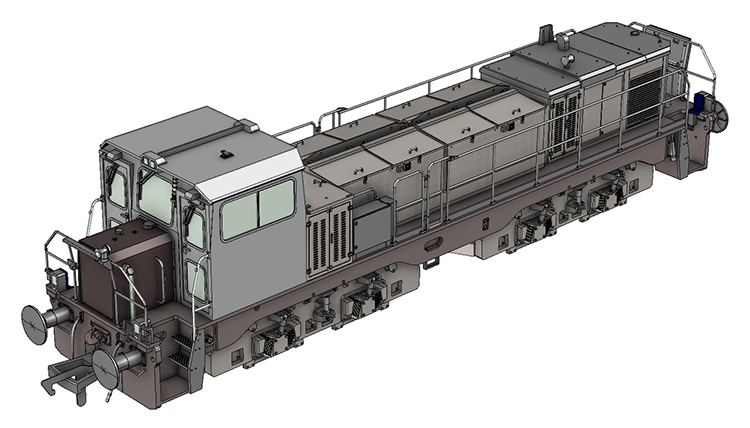 CAD work has been completed on this model, with the co-operation of Clayton Equipment Ltd, Beacon Rail and Tata Steel. First samples of these models are expected early September, 2022. The Tata models have different body arrangements and bogies to the Beacon versions, and the Beacon versions have different lighting arrangements. Revolution Trains has said that all differences are being accurately represented.

The manufacturer commented, "It is important to check the 'built' locomotives against the drawings before we commence the costly tooling process. Our CAD is 80% complete and the model options include pantographs that can be raised or lowered, and working roof fans, as well as full exterior and interior lighting.

A first EP sample was received in late spring and has been tested. The next step will be decorated samples with the expectation that production of these models will go into production late-2022.

Working samples have been received and assessed of the above models. Its N gauge versions are said to be slightly ahead of its OO gauge models and have already reached decorated sample stage. The manufacturer expects to close the order book for both versions around the time of the Great Electric Train Show at Milton Keynes in October, which it is to attend.

CAD of both N and OO gauge variants of these models has been approved and tooling has started. Models represent the present day flasks, introduced from 2014, which have now displaced the older style flasks that were in use since the 1970s. The model has been produced with the support of DRS Ltd and samples in both scales are expected by the Warley National Model Railway show at the NEC, which Revolution Trains is expected to attend.

First samples of these models have been received and tested. The manufacturer has said that while their operation is satisfactory, minor modifications will be made to the articulation units to make assembly more straightforward for customers. CAD is nearing completion for the OO versions.

CAD of these models is said to be almost complete, with the manufacturer now beginning CAD design work on its OO gauge versions. Models will be available to pre-order shortly at a low EarlyBird discount price.

Revolution Trains said, "Conscious that our customers do not have limitless funds, we are attempting to pace our releases to assist with budgeting."

Its 1938 tube stock CAD work was delayed due to Covid preventing access to research sources, however this has now been achieved and has resumed, with finalised CADs expected soon, and tooling "likely to start shortly".

For further images of the above models, and to view current pricing, visit the Revolution Trains website.