Versions available now are as follows:

Graham Muspratt, Development Manager said, “The Diesel and Electric Modellers United (DEMU) Showcase exhibition was an ideal event to announce these two new KMRC exclusive edition models that are in stock and available now. The grey/silver roof was a classic ‘Stratford MPD’ embellishment and 47003 could be seen widely across the network from Penzance, East Anglia to Glasgow, while 47363 Billingham Enterprise was a very distinctive member of the class in the BR Railfreight large logo grey livery with its ‘solebar’ red stripe.” 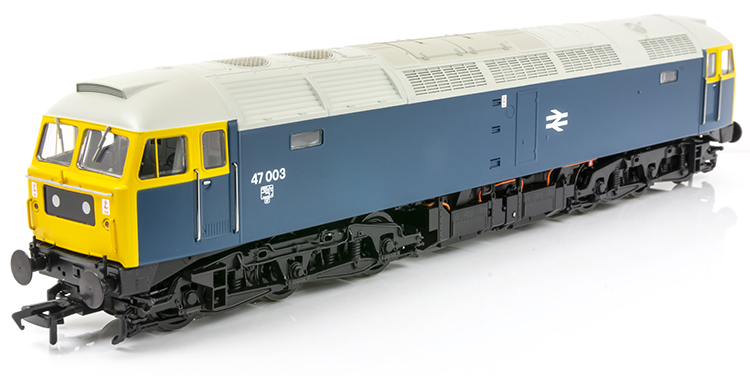 The KMRC Exclusive Class 47s are available in three formats, with standard DCC-ready versions at £239.95 with a Plux22 DCC decoder. The recommended decoder is a Bachmann item (36-570). Sound-fitted models at £339.95, are pre-fitted with an ESU Loksound V5 DCC decoder, while the sound-fitted deluxe format at £369.95 features the new motorised fan system. The sound-fitted deluxe model specification includes tinted windscreen glazing to replicate that seen on the prototype.

Brush Type four, later Class 47 locomotive 47003 was built at the Brush Falcon works and introduced as D1523 on June 12, 1963, and initially allocated to Finsbury Park depot. Under the TOPS numbering system, it was renumbered as 47003 in January, 1974. Spending seven years working out of either Tinsley or Finsbury Park depots, it was first allocated to Stratford depot in February, 1970 and would be a regular at the depot in the 1970s where it gained a grey/silver roof that was originally, and most notably, applied by Stratford MPD; but later also by Eastfield MPD on its 47/7s.

47003 briefly carried the unofficial name Wild Swan from November 29, 1989 while allocated at Tinsley. Entering the ‘Railfreight’ Class 47 reserve fleet in December 1990, and following a period of storage, the locomotive was officially withdrawn in July, 1991 and disposed of a year later.

Meanwhile, 47363 was built at the Brush Falcon works and introduced as D1882 on July 2, 1965. It was initially allocated to Immingham depot, and renumbered as 47363 in the TOPS numbering system in February, 1974. While allocated to Thornaby depot, 47363 was named Billingham Enterprise, on December 6, 1985, at Darlington Station by Paul Marsden, Deputy Chairman of ICI Agriculture.

From October 1990 47363 was allocated to Tinsley Yard and carried the name while in Railfreight grey with large logo, and later from early 1987 with the distinctive red lower stripe, as per this Kernow Exclusive model, until the plates were removed in October 1991.

For further information, visit the KMRC website, or see its Camborne or Guildford stores.