As part of the RMweb Members Day 2020 in aid of NHS Charities Together last Sunday, Andy York had a chat with Fran Burke of Accurascale about the current situation.

AY: Firstly, I want to thank you guys at Accurascale for the incredible support you have given to the fundraiser; it’s very warmly appreciated. How are you and the team all doing?

FB: We are delighted to be involved and help where we can. This is a tough time for frontline workers and the NHS staff who are doing an amazing job caring for people in this exceedingly difficult situation. Having been in the care of the NHS myself at one time it is plain to see what an amazing service it is, one to be truly treasured. It’s fantastic to see such a great reaction from modellers and manufacturers in the hobby to your initiative and it’s important we all pull together and help those who need it.

We’re all doing pretty good here at Accurascale. We have been on lockdown here in Ireland for a number of weeks now, and took the precautionary step to close our offices ahead of the official lockdown instructions from the Irish Government about 6 weeks ago as we could see where the situation was heading. Luckily, we can do 95% of our jobs remotely, so we have been able to keep busy and keep the show on the road. We also have plenty of projects on the go to keep us occupied!

AY: We tend to only hear domestic news and major international headlines on the news but what are the impacts for you all over the Irish Sea?

FB: Well, the pubs were closed by the government a couple of days before St. Patrick’s Day, so we knew then that this was serious! We’ve all been quite thirsty since then as you can imagine.

The lockdown restrictions are broadly the same as the UK, we are not allowed to make any unnecessary journeys, we can exercise only within 2km of our homes, large gatherings and events cancelled, and all shops apart from essential services such as supermarkets, chemists, greengrocers etc are closed.

The government reacted very quickly here to look after workers and businesses financially, and the public have really taken heed of social distancing and restrictions for the most part. Unfortunately, we have tragically lost people too, but it seems to have been less than predicted so far (touch wood!) We just hope that the curve is indeed flattening, but the outlook there seems to be cautiously optimistic overall.

One hard thing is not being able to attend funerals, with the attendance being restricted to a maximum of 10 people. We lost a friend of the company, Anthony McDonald, to a short illness last week. Anthony provided us with invaluable research material for Irish projects, our A Class locomotive in particular, and were unable to pay our respects at his service. That’s been tough on everyone who has lost loved ones during this time, but we understand the necessity of why it must be this way and we will celebrate their lives when this awful virus no longer dominates our lives.

We also have Gareth Bayer in Canada and another staff member in Moldova who are also isolating, keeping well and working hard designing new models during this challenging time.

AY: Having had to chew fingernails about Brexit and what that meant for you as a business you get thrown a bigger bone to chew on with first of all the Chinese aspects which extended the New Year factor shutdowns; how has that affected things?

FB: Yes, it has been an interesting couple of years to say the least! With Brexit we had some time to adapt after things became clearer following negotiations late in 2019 and we had been putting measures in place before that to aid operation, such as moving distribution to the UK and registering Accurascale as a British business, so we are in a good position now.

COVID19 was of course much more of a surprise and it was hard to gauge what impact it was going to have. We are in constant contact with China, so we could see that there would be a big issue coming our way when Chinese New Year had begun.

The extended closedown following Chinese New Year was for a number of weeks, but our factories are pretty much back up to speed at this stage now. Tooling and production has been delayed but the impact has thankfully been minimal on most projects. We emailed out an update in our newsletter on timelines a couple of weeks ago to update customers to where we’re at with outstanding projects.

We are also extremely lucky that our distribution centre has remained open and was able to take all the precautionary steps required to work in safety, so we can get orders out to customers in a timely fashion to help them stave off the boredom. Our detail packs and buffer stops have been hugely popular in recent weeks, so it seems many of you are at the workbench to keep busy or working on the layout. This is certainly a perfect hobby to keep busy during these tough times! Indeed, sales wise April has been extremely good, so it looks like hoarding wagons is the new hoarding toilet roll!

AY: I’ve just seen your Guinness keg wagons for Irish Railway Models, which are superb; you’ve got quite a few products to come based on the 42’ bogie chassis haven’t you?

FB: Thanks! The great thing about CIE was that they built a number of wagon designs using common chassis which is something we can really take advantage of. The keg wagons are the third of five initial releases of the 42’ chassis we have done so far, after container flats and the fertiliser wagons. The first two sold out so fast that we didn’t even have enough to send to magazine for review! We have rectified this demand by increasing the production run for the Guinness keg wagons, and it is likely we will do re-runs of the container liners and fertiliser wagons in the future.

Next after the keg wagons will be the modern spoil container train, and finally the weedspray train, which is iconic over here and has recently been retired. The keg wagons are due to leave China in a few weeks and are 60% sold already. We’re not sure if that’s down to the niceness of the model, or that we’re missing a pint in these challenging times!

AY: Whilst we’re talking about the IRM products when are we likely to see that wonderful little beast of an A Class coming?

FB: The A is progressing well, with decorated samples due at the end of May. We have the sound chip for the GM variant almost completed too. The Crossley has proven to be a challenge with the only surviving running locos with the Crossley engines based in Australia, and with lockdown and wildfires it has been a real tough time to get near it to record, but we will sort it at some stage! 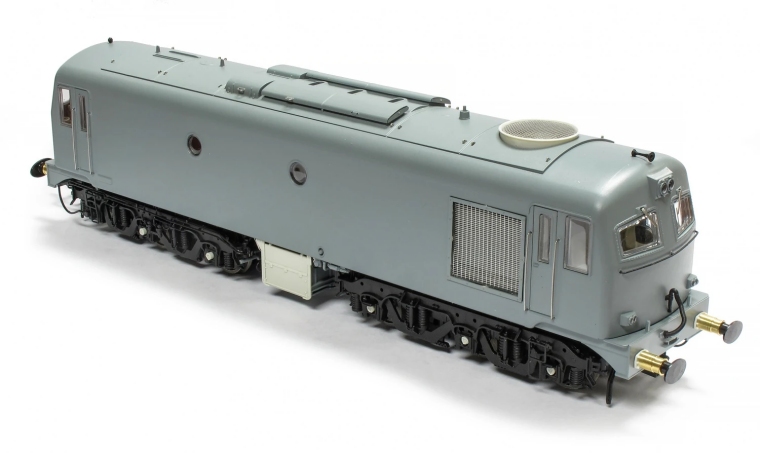 Once the decorated samples are to our liking, we can begin production and delivery is on course for September.

AY: And what are we likely to see coming through for the UK market next?

FB: In the next 4 weeks or so modellers will see decorated samples of the PTA and JSA wagons (we have seen photos, and they look very yummy indeed!) the KUA nuclear flask is now tooled and a sample is on its way to us for assessment, and the 92 is nearly there too tooling wise, which we are really excited about.

The PTAs and JSAs are next on the shelves, and have sold strongly through pre-orders, so we expect them to be like the PFAs with some selling out very quickly indeed. The finished wagons will be with us in September, with both PTA and JSA arriving together.

Then it will be the KUA, which is due in October once the sample is signed off. These have been massively popular, so much so that we have decided to increase the production run!

AY: How’s the Deltic and 37 development coming along?

FB: Both are making good progress now, which is great! We decided to make a number of changes to the Deltic. We were happy with the shape, but felt the cosmetic details needed a lot of work. When we went through it all and conveyed it back to the factory, they were a bit surprised as they are used to companies making minimal changes and signing off! These changes take time, as its redesign in CAD, tool and test, and expensive too. But we want to get it as good as we can, so we felt it was worth it, and that modellers would rather a great Deltic, though delayed, rather than an okay one earlier. It is also important to make sure it is robust with good QC built into the model from the outset.

It has been a huge learning curve for us. We have taken on board a lot of learning that we will build into future projects, and the Deltic itself is real technical challenge for a first loco. ESU has really come through with the sound too and we hope to demonstrate it in a couple of weeks when lockdown is over! We are very excited about it! Decorated samples will be with us in the summer and delivery is November.

The 37 has been another big test, but we have now entered tooling which is fantastic! We are looking at early 2021 delivery. They have been a massive success for us sales wise (as has the Deltic!) so the brave decision to take on English Electric’s finest seems to have been repaid by the faith of modellers, which we are eternally grateful for!

AY: Any more surprises in store coming up for us (being nosey as usual)?

FB: Oh yes indeed! As you may have noticed, we have been a bit more reserved when it comes to new announcements in the last few months, as we want to work away on new projects and announce them much later in development to diminish waiting times. It also gives us a chance to clear the decks with existing projects first. Again, a learning curve for a young company like us.

We have some excellent projects under way in OO that will see announcement later this year, some of which will be a new departure for us and cause quite a stir in some cases! We are also back looking at O gauge and want to hear from O gauge modellers what they would like to see done by us in O, loco, wagon and coach wise. They can send their suggestions to [email protected]

On top of that we are working on several commission projects with 3rd parties which will be announced in due course, so keep an eye out for those too! In these times of lockdown it pays to keep busy, and we have been doing just that, so exciting, brighter days for modellers and collectors are ahead!