The narrow-gauge railway with its mostly ex-military locomotives and stock is joined by an English Electric Lightening and a gathering of Morgan cars.

An English Electric Lightning aircraft, the Lincolnshire Coast Light Railway and a gathering of Morgan three-wheeler cars were seen together at the Skegness Water Leisure Park on April 5, 2022.

The Railway and the preserved Lightning are residents in the Water Leisure Park and the Morgan owners came from as far as Scotland and Somerset to see the Lightning.

Organiser, Ian Brett, of the Morgan 3-Wheelers’ Owners’ Club used to work on Lightnings in the RAF – including the one now under restoration in the Park, adjacent to the Railway and Skegness Airfield. He persuaded fellow Morgan owners to have a drive around Lincolnshire looking at relics of its RAF heritage, including the Battle of Britain Memorial Flight at RAF Coningsby and the Lincolnshire Aviation Heritage Centre at East Kirkby.

The Lincolnshire Coast Light Railway's (LCLR) John Chappell, commented, “The fact that they were doing this in open top unheated low slung vehicles, seems to be extremely brave of them in terms of British Spring weather!”

The English Electric XS456 Lightning T.5 is being restored by Craig Wise and friends and the LCLR runs alongside the ‘plane during the journey from Walls Lane station to South Loop. Both the Lightning and many elements of the LCLR were designed for military use.

The Lightning is a post World War Two jet fighter and the LCLR track, vehicles and locomotives mainly have their origins in World War One narrow gauge trench railways in France and Belgium. Both are testaments to British engineering and ingenuity – as are Morgan cars. 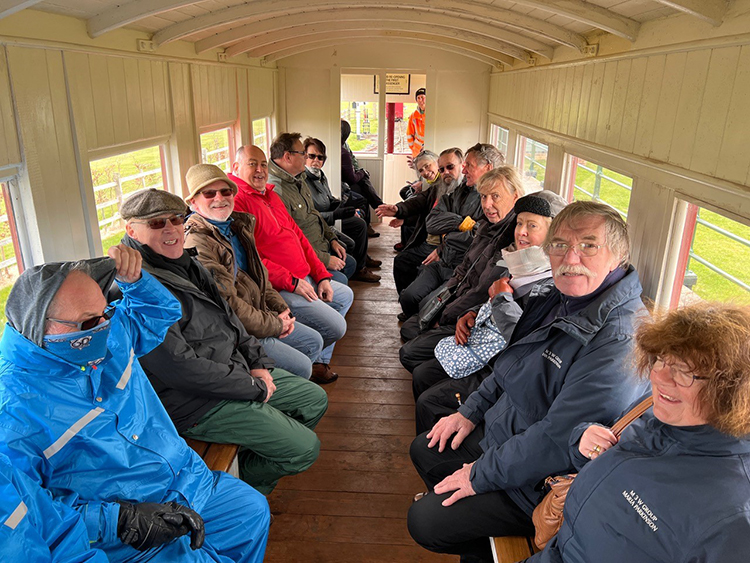 On the day of the visit, the LCLR posed its 1903-vintage 0-6-0ST steam locomotive Jurassic for photographs with the Lightning. More than 20 Morgans arrived on-site, whose owners were offered rides in the restored former Ashover Light Railway carriage No. 2, pulled by vintage 1940-built Simplex diesel Wilton.

John added, “The coming together of the Morgans, the Lightning and the LCLR at the Skegness Water Leisure Park was a diverse celebration of all things British!”

The Lincolnshire Coast Light Railway has published a number of key running dates which enthusiasts and families may wish to add into their diaries, including two dates to mark the Platinum Anniversary of H.M. Queen Elizabeth II and for the first time, four Mondays in August to cope with the increasing demand for mid-week services. For further details, visit the Lincolnshire Coast Light Railway website.