Siblings team up to welcome Birmingham 2022 Queen's Baton Relay along its leg of Severn Valley Railway visit this month.

When the Birmingham 2022 Queen’s Baton Relay visits the Severn Valley Railway on Saturday July 23, in the run-up to its final destination at the Birmingham 2022 Commonwealth Games, it will be a particularly special event for brothers Craig and Andrew Sharp.

While Craig will be in charge of the signal box at Arley station, Andrew will be on board the train as part of the Baton’s security team. 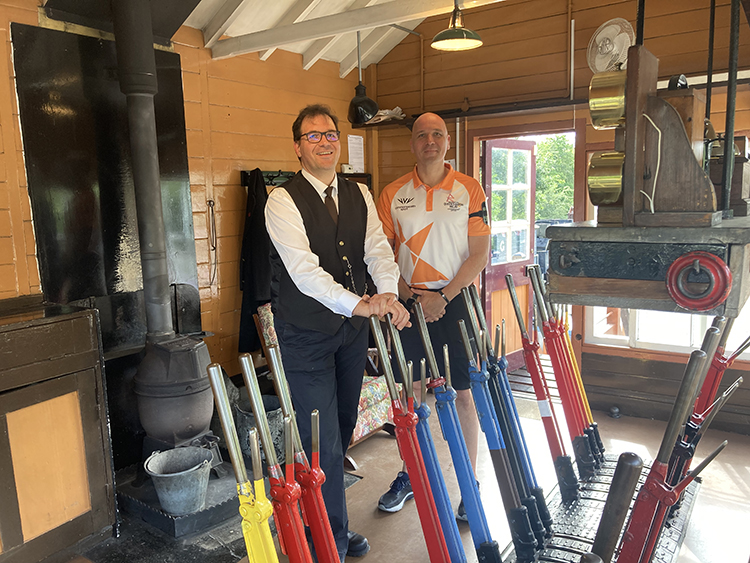 Bromsgrove-based Andrew is a sergeant with West Midlands Police and was selected to accompany the Baton on several legs of its 90,000-mile journey around the Commonwealth. "Our job is to make sure the Baton safely reaches the Opening Ceremony for the Birmingham 2022 Commonwealth Games," explained Andrew.

"The Baton contains The Queen’s Message to the Commonwealth, placed there in October 2021, when the Queen’s Baton Relay launched from Buckingham Palace. By the time it travels along the SVR line from Kidderminster to Bridgnorth, the Baton will have visited all 72 nations and territories in the Commonwealth."

IT managing director Craig, who lives near Droitwich, first volunteered for the Severn Valley Railway as a teenager in the 1980s and rejoined to train as a signalman in 2018. He explained his role on the day, "When the SVR’s purple locomotive, No. 70 Elizabeth II passes here on the July 23, it will be my job to operate Arley signal box to ensure the safety of trains on the line. It’s a safety critical role, and I’ll be ensuring that the track is clear, and exchanging a physical token in the same way as it’s been done here since the 1860s. Without possession of this, a train is not permitted to proceed. I’ll also be operating the signals and points in the Arley area."

For both brothers, who were born and bred in Hall Green, Birmingham, taking part in the Baton Relay is a real privilege. "The Queen’s Baton Relay is very much a community event," said Andrew. "It’s about getting people from all walks of life involved, sharing their stories and celebrating people across the Commonwealth. I’m very proud of what my brother does here at the railway, and I know he’s proud of me too, so this will be a wonderful memory that we’ll share for years to come."

"The fact that the Baton is coming through the region is very exciting," added Craig. "I’m so proud that I’m playing a small part in getting it to its final destination. And you can be sure that both Andrew and I will be giving each other a wave as the train passes the signal box at Arley!"

For further details and to see the Birmingham 2022 Queen's Baton Relay at the Severn Valley Railway on July 23, visit its website.