Continuing its 'Powering Britain' series, the manufacturer journeys to the origins of the railways with the announcement of Chaldron wagons in 4mm:1ft scale.

Accurascale is to produce models of the Chaldron wagon in OO gauge. Tooling is said to be complete, with pre-production samples signed-off and decorated samples due shortly. Models are expected at the end of 2022. The Chaldrons signal the genesis of Accurascale’s 'Powering Britain' series, covering the variety of wagons that have fuelled industry and life in Britain from the birth of the railways to the present day. 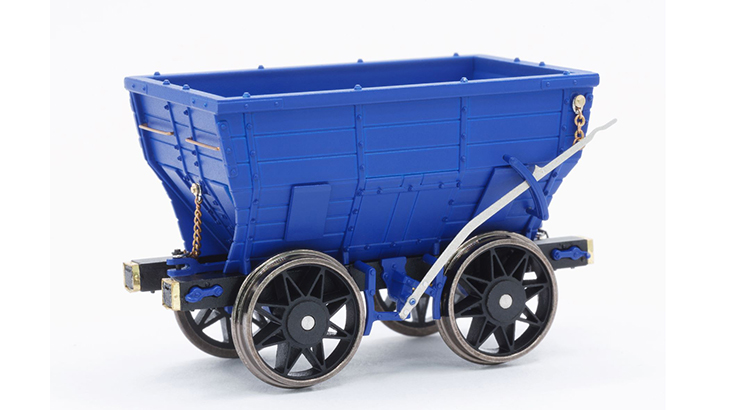 The chaldron design appeared around 1820, the continuation of an outline that dated from the mid-17th century. The two-axle wood framed ‘black waggons’ were built to different designs, but shared a common outline and were used to transport coal, brick, timber, stone and spoil across the North East of England.

A ‘Chaldron’ is a unit of measurement equating to 53cwt in weight, and with weighbridges not being used in the Great Northern coalfield in the mid-18th century ways and means of standardising coal wagon loads were being sought by collieries and merchants. The most efficient way was to use units of volume as a measurement, hence the term ‘Chaldron’ became the common reference for coal wagons in the North-East, becoming the standard carrying capacity used in wagon loads until around 1850, when three tons became the standard size. By then, the name had stuck, and it has remained a common reference for the ubiquitous wagon type.

From around 1860, the four-ton Chaldron, with its new outline body pioneered by the West Hartlepool Harbour & Railway Co. and the Londonderry Colliery Railway, established itself as the prominent design type of these distinctive waggons. By 1865 the remaining three-ton Chaldrons were upgraded to four tons by the use of ‘greedy boards’, which extended the height (and capacity) of the wagon. 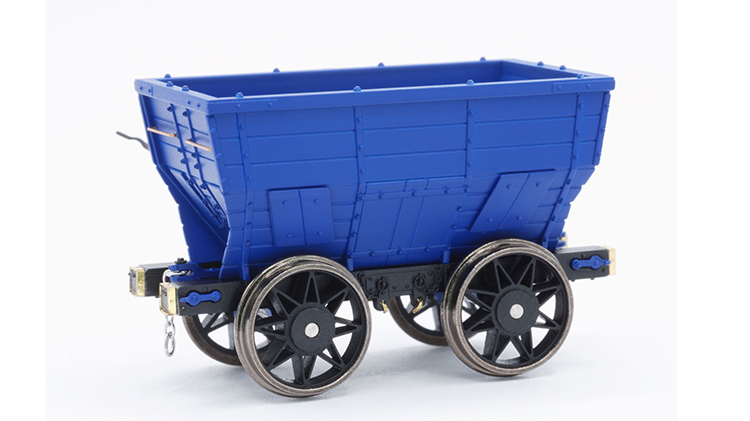 By this time, the North Eastern Railway had inherited around 15,000 Chaldron wagons from the constituent companies and by 1867 this had risen to around 34,000 vehicles in operation, as other companies such as the West Hartlepool and Stockton & Darlington were absorbed into the NER. Despite their widespread use, the Chaldrons were a poor design; requiring much maintenance and had a restricted carrying capacity in relation to their tare weight. The NER replaced them on the main line with larger capacity vehicles.

Chaldrons, or local derivatives of, spread as far afield as Cornwall, Leeds and Scotland by the mid-19th century. The type was common in Cumberland, with use on the Brampton Railway up to 1908 and right up to Grouping in 1923, with the Maryport & Carlisle Railway, but it is with the counties of Northumberland and Durham that the Chaldron is typically associated with. The NER had rapidly offloaded its fleet of Chaldron wagons from 1870 onwards, with a very large number being sold on to local collieries where they joined the diverse number of locally manufactured examples, but by 1886 Chaldron wagons still accounted for 10% of the NER’s wagon stock and by 1900 there were still some 2,200 examples in operation.

By 1908 just 147 were left and by 1913 the type had disappeared from stock. In the coalfields though, the future for the Chaldron wagon fleet was a different story. Most of the coal mined in Northumberland and Durham was exported, and so vast waggonways were established that linked the collieries to the coal staithes built along the river banks and at the sea ports. The waggonways negotiated tight curves and the staithes were developed around the use of bottom discharging wagons, so there was little incentive for colliery owners to change from using Chaldrons, especially if it involved expense. 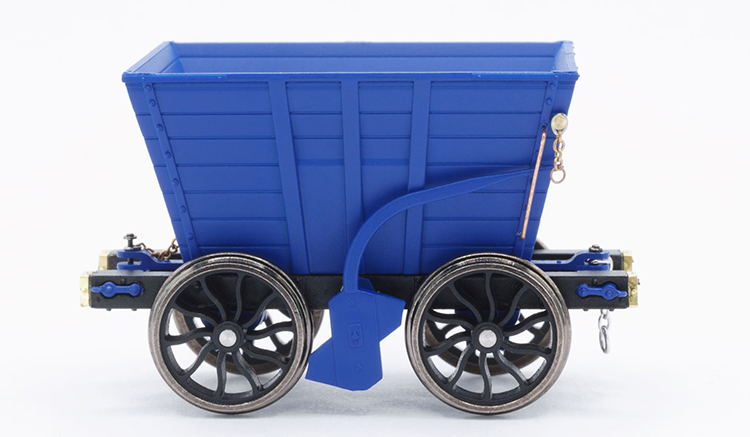 Use of the wagons continued into the 20th century. Between 1900 and 1914, when the NER imposed a ban on dumb buffered vehicles (which included the Chaldrons), privately-owned Chaldrons were still being used over the mainline, albeit only as part of block train working agreements. Among those colliery fleets with such an agreement were the large concerns of Lambton (between Penshaw and Sunderland), the Wearmouth Coal Company (between Hylton and Wearmouth), the Londonderry Railway (between Seaham Harbour and South Dock, Sunderland) and the South Hetton Coal Company in the same area. Post-1914, the Chaldron fleets were confined to the internal user railway systems, so their use altered to the conveyance of coal between pit head and washery, as well as for transport of fireclay between pits and the colliery brickworks. Between the wars, Chaldrons were a common sight at exchange junctions, especially at places such as the Pelaw Main system, Seaton Burn, Lambton, along the Blyth and Tyne line to Percy Main and between Seaton Delaval and Seghill on the old NER lines. Post-war the numbers declined dramatically. Nationalisation of the coal industry led to a surplus of wagons as the smaller collieries and coalfields closed, but at places like Throckley and Backworth north of the River Tyne the Chaldron fleets lasted into the 1950s. At Seaham Harbour and the South Hetton, the type held firm, being used into the late 1960s. Even when through running at Seaham ceased, the abandoned Chaldrons were re-purposed, being used for the recovery of coal from beneath the staithes, until they were demolished in 1978, being the only wagons that could traverse the tight curves.

Accurascale commented, "With a career on the rails spanning over 150 years, the Chaldrons seemed the perfect place to begin the timeline for our 'Powering Britain' series of coal wagons through the ages. There has been a surge in interest in the birth of the railways, along with intrigue in pre-grouping and the Victorian era with recent locomotive releases, not to mention the interest in industrial heritage and its railways. With this in mind, the Chaldrons are a logical release to satisfy these growing areas of interest within the hobby."

The manufacturer has said that extensive researching of the prototypes was conducted, surveying preserved examples at the Beamish Living Museum, with further research aided by the North East Railway Association, historians and experts.

Accurascale has produced five main variants of the type, based on the S&DR style dating from 1835-45 built at Shildon, the North Eastern Railway (and subsequent Internal User pattern) P1 types of the second half of the 19th century and the improved four ton ‘Black Waggons’.

Among the five variants are different arrangements of ‘bang plates’, handbrakes and wheel styles, which are included in the tooling suite.

Accurascale deemed tension-lock couplings to be too large for the wagons, and so has created a close-to prototypical arrangement, with chains being replicated faithfully, using magnets to connect waggons together, with additional NEM attachments being used for connection to existing locomotives and rolling stock. 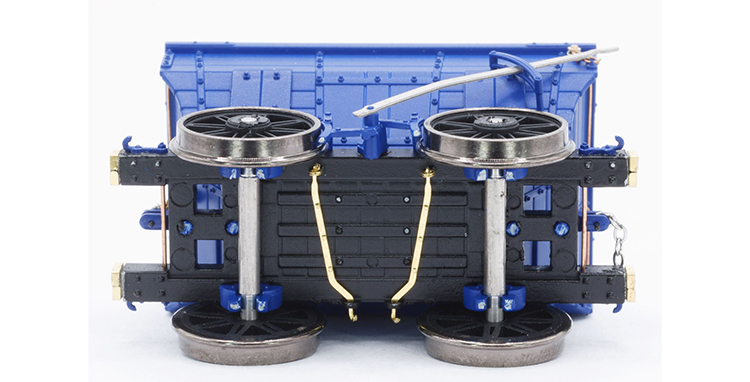 The specification of model is as follows:

Packs produced are themed by colliery, with each waggon depicted based on photographic evidence and reference to colliery records to confirm lettering styles. Some packs contain just one style of waggon, while others contain mixed styles where research has shown that they operated in conjunction with each other. Packs produced are as follows:

For current pricing and availability, visit your local stockist, or see the Accurascale website.