With tooling said to be complete, and first engineering prototype samples received, the announcement of the manufacturer's first RTR steam locomotive appears to be well advanced, with delivery of models anticipated before the year end.

Accurscale has unveiled its next OO gauge / 4mm:1ft scale locomotive as the GWR 78XX 'Manor' 4-6-0 tender locomotives. The models will be the manufacturer's first venture into RTR steam outline.

Tooling is said to be complete, with the first test mouldings having taken place. Accurascale said, "We are currently awaiting the etched and turned metal parts which will complete the buffers, motion, whistle baffle, chimney and other parts of the locomotive which will arrive shortly for assessment."

Delivery of models is anticipated for Q4 2021, with pre-orders being taken via Accurascale’s stockists. Accurascale added, "Development of the 'Manor' is well progressed, with work on the project beginning 18 months ago. The Accurascale research team conducted extensive surveys and a scan of Cookham Manor at the Didcot Railway Centre and research on various GWR tenders at Tyseley Locomotive Works each side of the Warley Model Railway Show in November, 2019.

Spot the difference – Accurascale's first batch of locomotives in 10 guises will represent a cross-section of the class, with details adjusted accordingly.

The manufacturer is promising a number of detail configurations which makes almost every variant bespoke, with options for chimney, smokebox and boiler sides, smokebox door/handles and buffers. The range of promised tenders is similarly complex with different tender bodies, frames, spring hangers, buffers, and also the frame installed in latter days to remind crews not to climb onto the coal space while on overhead electrified lines.

"The locomotive will feature a wonderfully-smooth operating three-pole motor with flywheel that offers an exceptionally low starting voltage. Electrical pickup is from all tender and locomotive driving wheels and there is a 21-Pin MTC Socket in tender for the decoder of your choice, or you can choose our DCC Sound-installed option. DCC modellers can enjoy Accurascale’s by now standard PowerPack capacitor for uninterrupted power and sound and three speaker arrangement, which includes a sugarcube mounted in the smokebox. There is also a flickering firebox light in the cab and in DCC this employs ESU’s intelligent flicker to synchronise the effect with the sound from the speakers," added the manufacturer.

Surveys of four different locomotives were undertaken for the project and the data was combined with a 3D scan, 1938 and 1952 works drawings to create what Accurascale claims to be the most accurate rendering of this class in any scale.

The Manors wore nearly all major GWR and BR liveries from 1938 until their withdrawal at the end of 1965. The first 20 were delivered in unlined GWR locomotive green with the roundel or ‘shirtbutton’ monogram logo on the tender, although by nationalisation they could be seen with tenders wearing GWR initials or GW separated by the company’s coat of arms. Repaints during wartime years would have been unlined black, with unlined green returning once hostilities ended. Unlined black was again applied after the formation of British Railways, albeit with ‘lion and wheel’ crest and smokebox-mounted numberplates. However, the BR-built Manors were released from Swindon in lined mixed traffic black, later being repainted in unlined black. Between 1956-60 all 30 Manors were turned out in lined BR green, initially with the early crest but the majority received the later style totem.

10 locomotives will be released in the first Accurascale run: 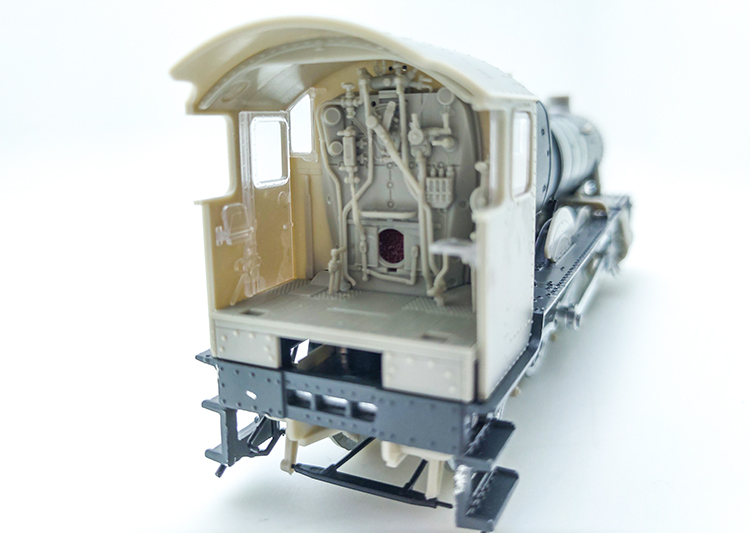 A detailed cab interior has been unveiled, with many separate parts.

For more details, including pricing and availability of models, visit the Accurascale website, or see your local stockist.