Built by Bombardier/Prorail of Wakefield in 1998 and designed to carry spent nuclear fuel from Royal Navy nuclear submarines from their bases at Devonport and Rosyth to Sellafield for disposal, these 80-ton monsters have been a source of interest among enthusiasts for over 20 years. 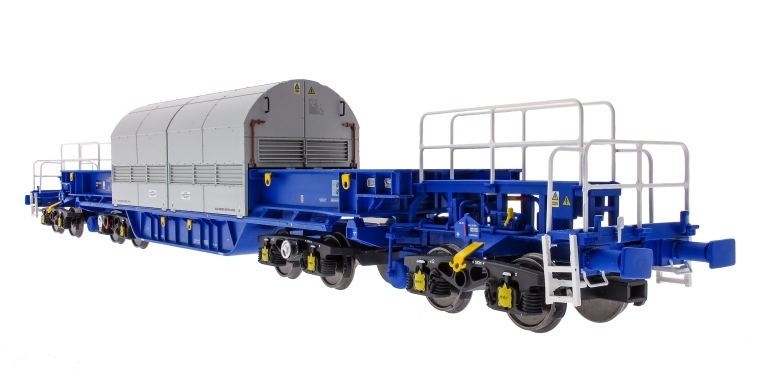 Accurascale received the first engineering prototype during Chinese New Year, and spent a number of weeks assessing the sample for corrections and critique before planning to progress to the next stage of decorated samples after Chinese New Year ended and the factories reopened. Unfortunately, COVID-19 then added to delays.

While this disrupted delivery plans of late summer 2020, significant progress had already been made on the project. Decorated samples have now arrived and have been assessed by the Accurascale design team ahead of manufacture. Feedback on these models has been generally positive with decoration and looks of the model, but there are still some areas ripe for improvement.

The walkway thread for is too large, coarse and of the wrong pattern. The brake shoes on the bogies are also receiving attention as they are quite wrong and were not updated from EP1. The buffer heads will be darkened for production and they will also be corrected to stop them spinning around in their shanks. All these issues have been corrected by the factory and were minor issues overall.

With the COVID19 impact and tooling corrections, the KUAs are now due in December 2020, with production already underway.

BRM magazine prides itself on bringing you the latest news and in-depth product reviews. To subscribe to the magazine’s digital edition, full of extra content like exclusive videos and additional layout pictures, click here & enjoy 25% off an annual subscription.