The manufacturer reveals liveries applied to its forthcoming steel wagon, and despite minor corrections, remains confident of delivery in Q3, 2021.

Announced in January 2021, Accurascale's 'Coil A' has been developed with its MDO and MDV wagons, sharing a similar underframe, as per the prototypes. Accurascale has said it is "quite happy with the fine printing, detail and colours of this decorated sample, with some amendments carried out to give the hood a more canvas type appearance."

However, the manufacturer has identified some seam lines to be removed and noted corrections required to the imprint of the stretcher bars at the ends of the canvas top. The wagon well should be brown, not black as per this sample, but Accurascale has said this will be corrected for production variants. Despite the are minor corrections and the delivery date of these wagons remains unaffected at Q3 2021.

In the late 1950s/early 1960s, British Railways was out of step with the increase in production of rolled strip steel and as a result, neither the correct type or necessary quantity of wagons were available to British Railways to be able to meet the demands placed upon the system by this traffic. The demand for specialised rolling stock occurred when there was a surplus of rolling stock available and eventually, thirty different diagrams were issued, as a variety of surplus stock was converted for the carriage of steel coils, in varying capacities. 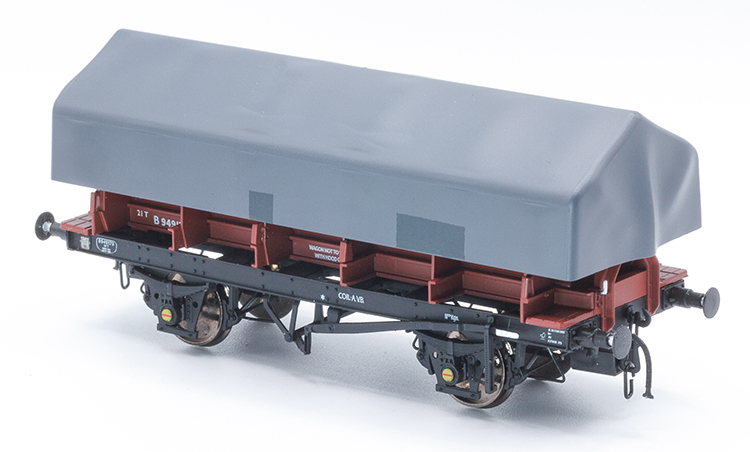 1/412 Coil wagons were first allocated for cold reduced coil traffic from John Summers, at Hawarden Bridge during 1962 and by 1975, 35 vehicles were in Pool 3019, working Hawarden Bridge to locations that included Leith South, Wolverhampton Steel Terminal, Whitehall Road in Leeds, Pressed Steel at Swindon, Stroud (for Elphor Ltd, producers of aluminium coated steel strip) and Jackson and Bell at Watford North. By 1971, examples of 'Coil A' wagons could also be found at South Shields, and at Middlesbrough by 1975, by which point 15 were allocated to Pool 1307 on hire to the British Steel Corporation at Motherwell. They were also to be seen at Grangemouth Docks and at Ebbw Vale in traffic from Gartcosh with 'Coil B', 'Coil E', 'Coil G', 'Coil L' and 'Coil T' wagons.

By the middle of 1976, 'Coil A' wagons seen on inter-regional traffic at Severn Tunnel Junction, running with bogie 'Coil G' (JGV) wagons and during 1979 some of the diagram were involved in movements between Lackenby and Strood, carrying hot rolled coil rather than cold reduced coil, working alongside bogie 'Coil M' (JMV) stock. By 1981 examples were working from Goole Docks alongside ex-SPV 'Coil D' (KDV) stock and during 1982 several examples were noted at Newport Docks, branded to Pool 7121 alongside JGV stock. They were also working to British Leyland at Swindon, Brierley Hill and to Ford at Dagenham. By 1984, the 29 remaining vehicles were used on South Wales workings, along with the 27 'Coil B' survivors, particularly to Newport Docks where most of the survivors collected but also to Hamworthy Docks at Poole. In 1986 several examples worked to Avonmouth but by early 1992, the 21 surviving vehicles were all operating out of Llanwern, along with the remaining SGW types, but only to the end of the year, when the last examples were scrapped.

For current pricing and availability of its models, visit your local Accurascale stockist or its website.