Isle of Man Post Office will issue a brand new set of six stamps on 25th June 2020 to celebrate the 125th anniversary of the first mountain railway in the British Isles.

The Snaefell Mountain Railway climbs from Laxey to the summit of Snaefell, the Isle of Man’s only mountain, 2036 feet above sea level. Built by pioneering Victorian engineers, its trams were powered by electricity, a technology then very much in its infancy. Very few British cities or towns had electric trams at this time; an electric tramway climbing a mountain was without doubt state of the art technology. Perhaps even more remarkable, the railway is still in active operation today and is little changed from those Victorian times.

A journey from Laxey to the summit takes thirty minutes. As the trams climb the Laxey Valley there are unrivalled views of the Laxey Wheel and the hamlet of Agneash. At Lhergy Veg, the line clings to a steep rock face looking down on the Laxey River far below. Trees and lush farmland are left behind as the landscape gradually changes to that of the more barren uplands. The Mountain Road is crossed at the Bungalow and the line now climbs in a spiral around the mountain. In turn, Sulby Valley, Jurby, the Point of Ayre and Ramsey come into view before the tram comes to a halt outside the Summit Hotel. A short walk takes the traveller to the actual summit from where, on a clear day England, Scotland, Wales, Northern Ireland and Ireland can be seen. 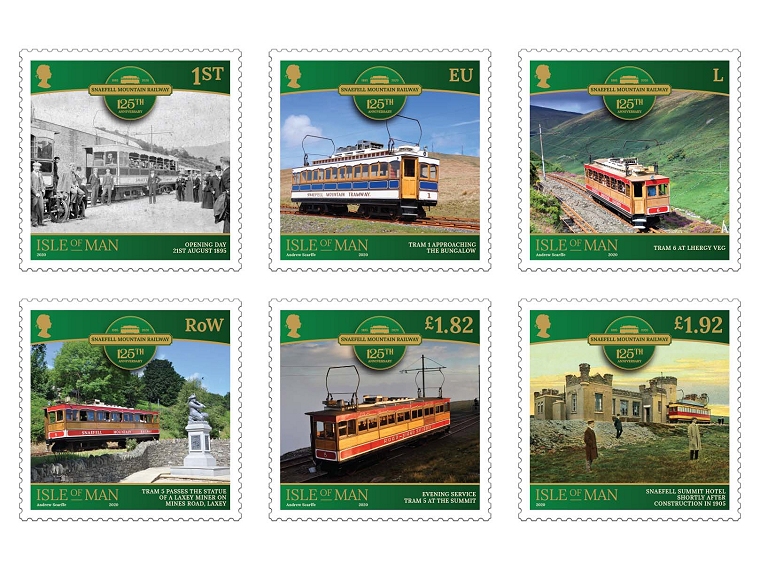 Issue text author Andrew Scarffe, Isle of Man Railways, said: “It was a great privilege to be asked to provide the images for the stamps which will be issued to celebrate the 125th anniversary of the Snaefell Mountain Railway in 2020. The commemorative stamps are a fitting tribute to the skill of the pioneering Victorian engineers responsible for the railway’s construction. I hope that these stamps will encourage people to travel on and enjoy this unique railway.”

Maxine Cannon, General Manager, Isle of Man Stamps & Coins, said: “We would like to thank Isle of Man Transport for their assistance in the preparation of this stamp issue. To be “on board” with Andrew Scarffe has been a great journey. His insight, passion and lifelong interest in the Snaefell Mountain Railway has proven to be invaluable in the creation of this wonderful collection.”

The stamps can be ordered from the Isle of Man Post Office.

For all the news from the narrow gauge world, including the Isle of Man, subscribe to Narrow Gauge World magazine.