Retford is a large EM gauge layout built over a period of 20 years by Roy Jackson. It depicts a section of the East Coast Mainline in the late 1950s.

Since childhood, the East Coast Main Line has given Roy Jackson great pleasure. The sight of a Pacific, particularly an A4, streaking along, chime whistle blowing, with 10, 12 or even 14 cars behind it was a thrilling picture. But with all that in mind, his formative years were spent very close to the Great Central main cross-country line from Sheffield through to Gainsborough and Lincoln. He could see a D11 or a B1 on the Sheffield - Cleethorpes passenger train, or a ‘Tiny’ (04), or ‘Straight Eight’ (02) on a heavy mineral battling on with greasy rails to contend with. Or what about an express fish train, ex-Grimsby, with a K3 at its head speeding along? 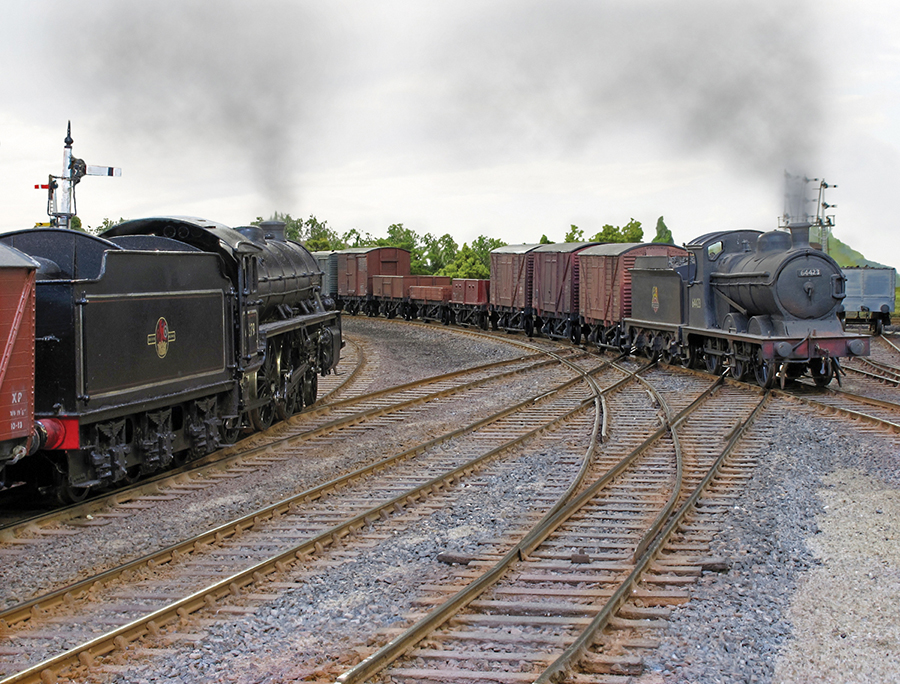 For those who don't know Retford, it was where the Great Northern East Coast main line transected the Great Central (GC) cross-country main line on a flat diamond. All the glamour and the drudgery of the working railway was here in one spot – the non-stop 'Elizabethan', the Pullman trains with their superb Pacifics, the ordinary passenger trains with their variety of motive power, the express goods and the ponderous, grimy, class eight goods trains. The crowded platforms, the deserted platforms. The sunny summer days and the rainy afternoons when nothing much seemed to be happening. Sandwiches and bottles of pop, lan Allan locospotters’ books. Retford it had to be! 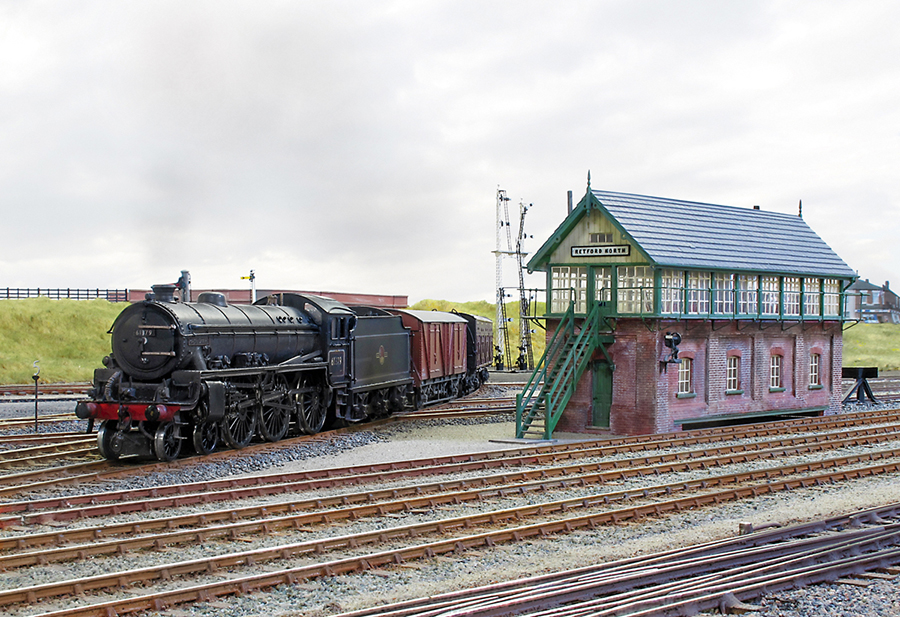 Retford North signal box is a fine structure on Retford - note its wall-mounted signal. Passing it is B1 No. 61126.

Around 20 years earlier, Roy called in at the old British Railways surveyors' office in an old house overlooking the site of the GC engine shed. After chatting to whoever was in the office at the time, he was allowed to look through their collection of drawings of the area. The office was an Aladdin's cave. There were leather-bound volumes of watercolour drawings of the Manchester, Sheffield and Lincolnshire Railway and were magnificent! But the drawings that interested him the most were copies of an air survey commissioned by BR in May 1957 as a prelude to realigning the ECML. These drawings, already out of date at the time, even showed which way the toilet doors swung on the station, the position of every gas lamp, signal, and manhole cover. They were detailed to the 'Nth' degree. Asking if he’d be able to buy copies, he said "I've got spare copies so you can have them, but don't tell anyone because they were £50 a copy for BR to buy!" 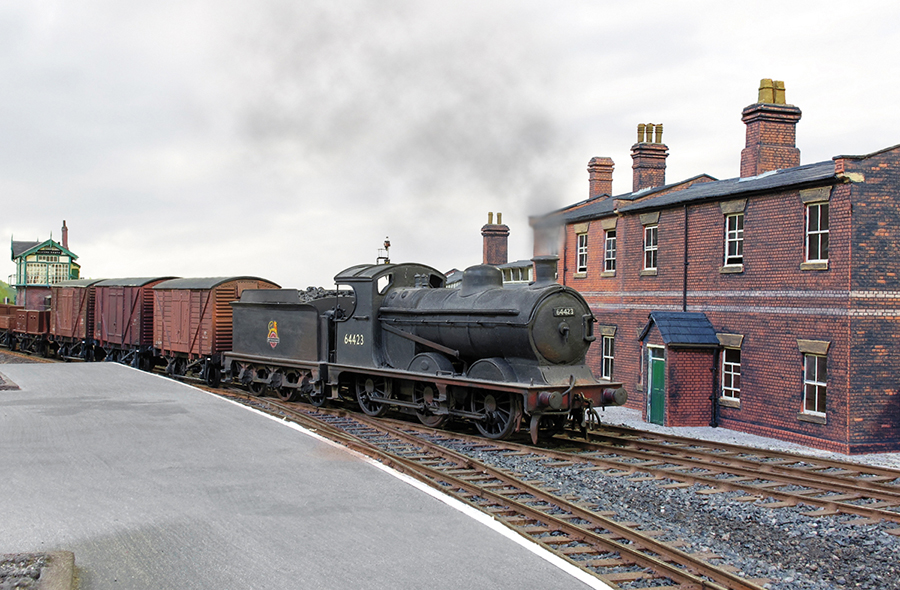 J11 No. 64423 again, trundling past a row of brick-built houses. Note their authentic weathering and sash windows, some of which are partially opened.

Patience is a virtue

He looked in Yellow Pages and rang a number of drawing/drafting companies to see if they could photograph his drawings and blow them up to scale, but he got nowhere. It would be expensive and they couldn't undertake the work. The next idea was to use a photocopying machine and use the enlarging facility to bring the drawing to the size he needed, piece by piece. This was also expensive because it wastes lots of paper and is time-consuming. A 2 1/2in strip from the aero-survey equates approximately to one sheet of A3 paper in 4mm scale, but luckily, a friend agreed to help and afterwards, each piece of A3 paper was taped together. What a magnificent sight - the real thing in 4mm scale! 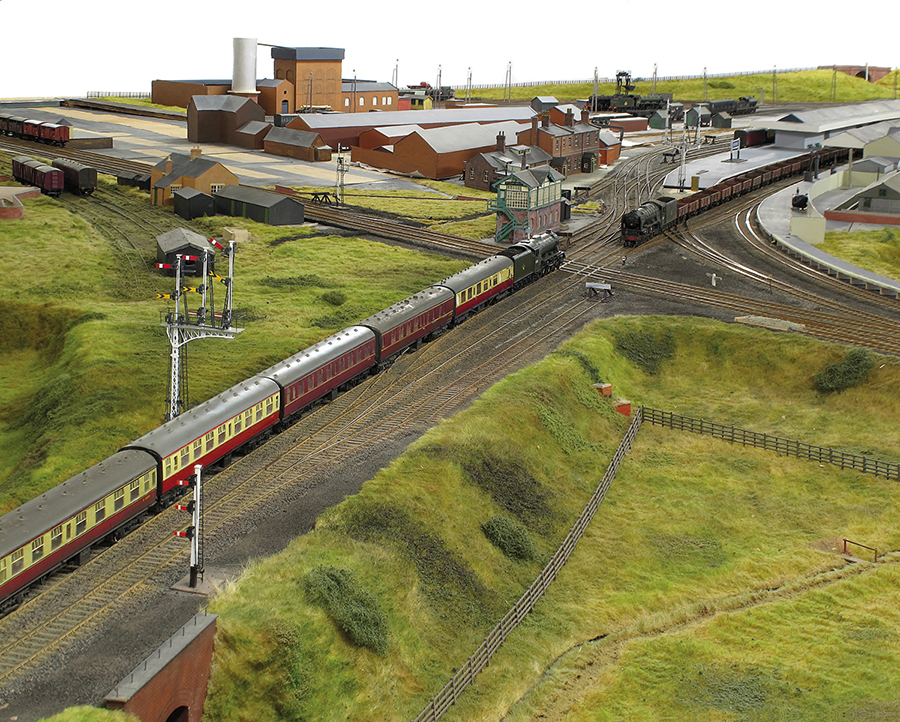 A view from the sky. Roy's goal with Retford was a layout on which he could operate mixed-freight and passenger workings. His greatest acheivement must be the scenery which successfully blends green hues to perfection without trees.

Has anyone else considered something the size of Retford as a solo project? After 'High Dyke', 'Dunwich' and 'Blakeney', John Phillips, Geoff Kent and Roy couldn't seem to get their heads together to reach agreement on what to build next. They’d each begun to drift towards their own ideas - ideas that didn't seem to interest the other two. Roy began to build pieces of Retford's pointwork, not expecting to have anywhere to construct the complete railway. The first baseboard to be made was the Retford (North) board at approximately 11ft 6in x 6ft. The rails were built directly on the enlarged photocopies of the 40ft/in aero-survey drawings. This board was built and the track laid and wired in Roy's dining room. The second board was the Great Northern engine shed. This small four-road engine shed and its associated service roads cover an area in 4mm scale approximately 11ft 6in long and at its widest point 5ft 6in. The two boards couldn’t be assembled together in the dining room, even with the kitchen and hall doors removed. 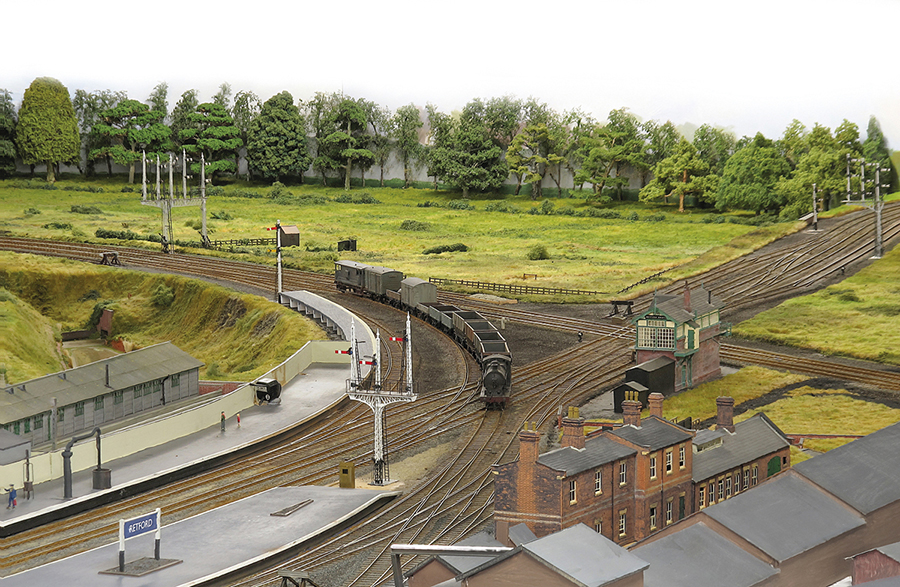 A mixed-freight rounds the curve - to its left a sizeable dyke. A camera discreetly placed on the adjacent platform records views of the layout when operating. In the distance, a line of trees make a natural backdrop and their variety is impressive.

Retford wasn’t a home layout. Nor, as envisaged, was it the kind of thing that – even assuming it could be made portable – could fit into any more than a handful of exhibition halls. But that was for the future. Board succeeded board and luckily, Roy's neighbour, a farmer, allowed him to squeeze into his granary over a weekend to assemble the baseboards. The engine shed board was built and taken back to the dining room to be worked on, the North board being relegated to the hall. The scenic boards and the GC fiddle yard boards followed surprisingly swiftly and, with track laying and wiring, added up to about six months work in total, working mainly on his own. Roy felt he needed to mention this for the benefit of model railway club committees!
In successive years he was allowed to use the granary for six weeks or so after the previous year's grain had been sold and before the place was fumigated for the next crop. Though the 60ft x 40ft granary was too small to assemble the entire railway in, for those six weeks he'd work on it from dawn, sometimes right through to midnight and beyond, almost always on his own. Dedication to a project can go a long way!