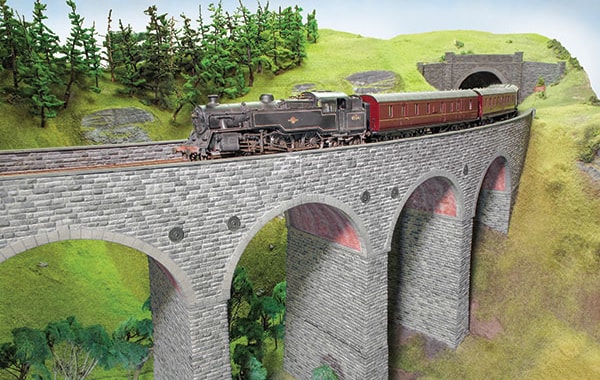 Publicising the many benefits of club membership, Keith Croucher of Leamington & Warwick Model Railway Society takes us on a tour of its large-scope imaginary club layout, based somewhere north of Nottingham.

t’s fair to say that very few people could hope to build as large a project as 'Kimble' single-handed. One of the best aspects of belonging to a model railway club is that you meet a wide variety of people with different skills.

Many evenings have seen our “sparks” team crawling around on the floor weaving wiring under the board, or building up the circuitry that allows us great flexibility when operating the model. At the other end of the layout, massive chunks of hillside have been hewn from wood and polystyrene.

The Leamington & Warwick Model Railway Society O gauge group began life nearly quarter of a century, and two clubrooms ago, when a few members fancied working in the scale and decided that each of them was willing to build a locomotive and a few wagons, enough for a 12ft shunting layout called 'Mallory Road'. 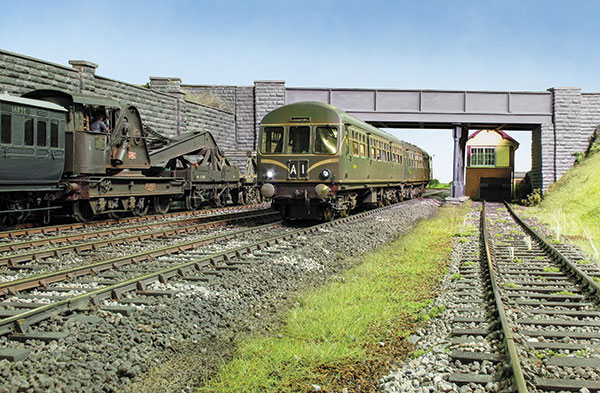 A move to a new clubroom made space for a 32ft x 16ft double-track oval and the group grabbed the chance to build something that would be a dream for most.

'Kimble' first appeared at Shepshed around 2006 as a fiddle yard to terminus station. Unlike previous layouts, the model operated with a DCC ZTC controller and handsets.

It soon became apparent that the layout as a full circuit looked a bit like a toy train set. Trains came into the station from one curve and immediately out the other. Shuffling layouts around in the clubroom allowed a further 8ft scenic area at the end of the platforms, which helped the presentation enormously and the fiddle yard also benefitted with space for longer trains. 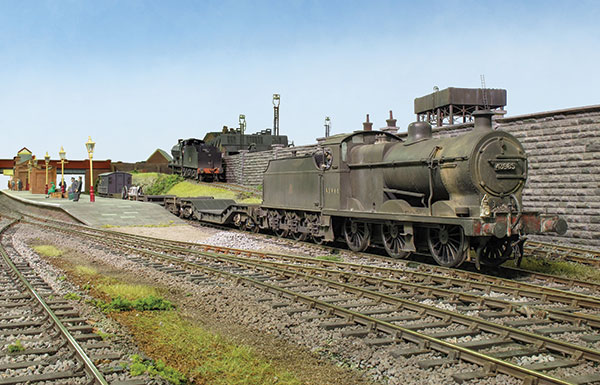 Kimble represents a GC/LMS joint line somewhere north of Nottingham. The locomotive depot was built by the L&NWR to service two busy mineral lines serving several large mines – these are out of sight the other side of the shed.

These mines were worked out and closed in the 1930s, but rather than close the shed, a steep incline was built to serve the increasingly busy joint line. 'Kimble' now serves as an engine change point for freights and the shed headshunt at the bottom of the incline is used for diesel refuelling.

The basic passenger service is between Nottingham and Sheffield/Chesterfield, provided by suburban stock trains or DMUs.

There is a handful of through corridor trains to Leicester/London in the South and Sheffield/Bradford/Manchester or Hull in the North. The best train of the day in each direction includes dining facilities and is named “The Master Joiner”. 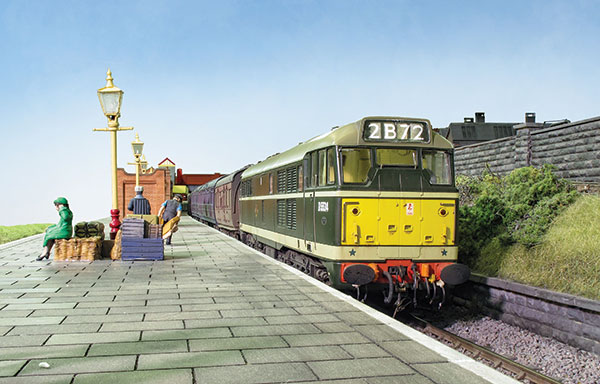 There are two inter-regional trains each way per day – a Hull/York/Weston-super-Mare service provided on alternate days by WR and ER stock and a Sheffield-Hastings train which alternates between an SR green set with Maroon Mk. 1s in it or just Maroon Mk. 1s.

There are a couple of parcels services each way per day too, with the usual mixture of ‘anything goes’ vehicles typical of early BR days. The route is used as a diversion at weekends and there are a handful of special trains such as troop trains and enthusiast excursions.

On the freight side, the staple is coal, sugar beet and salt with some of these trains changing engines at 'Kimble'. These trains arrive in the down loop or are reversed into the up lay-by. There are also fitted van trains that typically don’t stop unless checked by signal.

There is a pick-up goods train whose only visible activities at 'Kimble' (there is no goods yard on the scenic section), is to deliver engine coal wagons for the shed and the odd ash wagon. 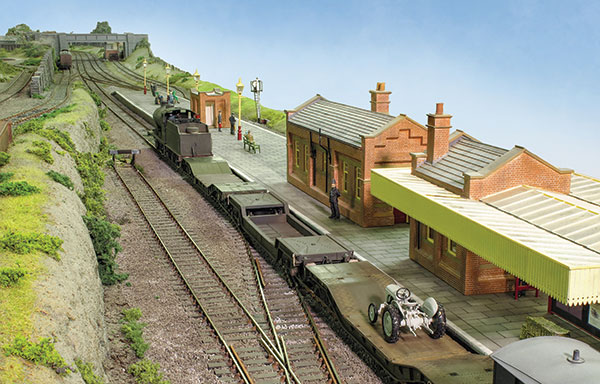 The extensive Knight's Brewery has its sidings allowing it to receive raw materials by rail directly to goods in and out. A wagon turntable enables wagons to be turned from the siding and run directly into the warehouse. Regular beer vans run to and from the brewery throughout the day.

An important part of the scene is the locomotive shed to the rear of the station. This links to the main line to allow for engine swaps to add operational interest. It can also form a stand-alone model if there is no space for the full layout. 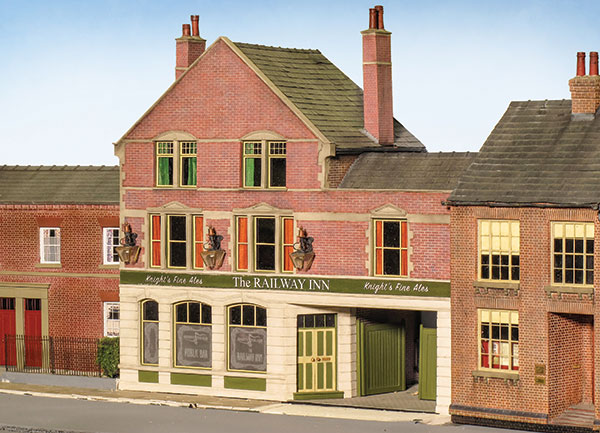 At the southern end, the town of 'Kimble' is set on a hill, dominated by Knight’s Brewery with its array of industrial buildings, workers’ housing and private railway with a wagon turntable, operated manually or with an automatic shuttle.

The north end sees the line pass through the countryside before crossing an impressive viaduct, with hills, rocky outcrops, pine trees, and then entering a tunnel.

All buildings on 'Kimble' are scratch-built using mostly foam board, timber, and plastics with specially-etched detail components such as windows, doors, fencing, and lettering. Complex structures such as water tank panels, elaborate, decorative brickwork and lamp standards, are 3D-printed. Most finishes are hand or spray-painted using enamels.

Trees and landscaping use a wide combination of materials. The ground is built-up using foam and hard resin, covered with paint and static grass, scatter, scrub and trees. Trees are made using wound wire techniques, foliated with matting and scatter or using real wood twigs and roots cured in glycerine and similarly topped. 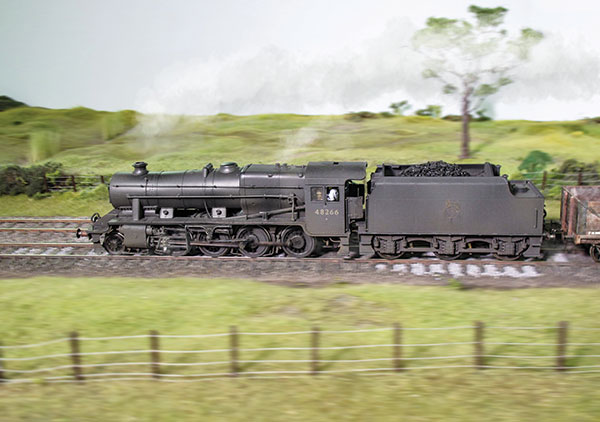 The tunnel portal is a representation of Shotlock Tunnel, with the date stone 1875 marking its year of completion, and is hand modelled in resin-based plaster. Also on the Settle & Carlisle Railway, the viaduct, based on ‘Lunds Viaduct’, used handmade master moulds to cast and replicate each section.

Two signal boxes control roads either side of the station. One signal box has an open back so that the interior workings and view of the line can be appreciated by the audience. Signals plug into the baseboard and provide three blocks in both directions on the main lines, with post and ground signals controlling the goods loop and multiple points across the main lines.

The station buildings are based on Rothley Station on the preserved section of the Great Central Railway's London Extension and built to the standard island platform pattern of country stations on that line. The original was opened on March 15, 1899 and has been restored to the charm of late-Edwardian era architecture.

On a hill behind the station, the locomotive depot has facilities typical of a rural railway location with a two-road shed, outside locomotive storage, coaling plant, ash pits, sand drying house, mess building, turntable, diesel refuelling facility and water tower, (based on one at Oxford L&NWR/LMS). Buildings and structures are lit using miniature neons and fibre optics. We are on our third engine shed; the scratch-built model replaces a cast plaster kit (too heavy and fragile for an exhibition layout), which replaced a plastic kit. 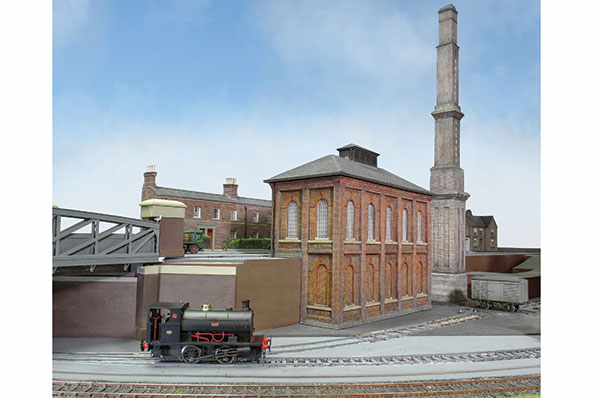 On the brewery complex, buildings consist of a pump house with separate chimney, water tower, wagon turntable, brew house, goods in and out, offices and storage. A set of highly-detailed terraced cottages, an inn and other buildings are included in the ¾ back scene, set on a road behind the brewery, which carries over the railway on bridges at either end. The cottages were based on the North Midland Railway cottages built in 1840. These were probably the first purpose-built railway workers’ houses anywhere in the world and renovated in 1981 after becoming derelict.

The brewery has its own railway and is, at the time of writing, very much work in progress. With the editor’s permission, we’ll write this extensive industrial scene up at a later date as there have been a number of interesting challenges to face, and we’re not quite through them all yet!

'Kimble' has always been DCC controlled. Initially, this was with the ZTC system which we liked because of the quality of construction and the fact it was British-made. However, the change of ownership meant that it started to limit our operations, requirements for which had grown more sophisticated over the years. 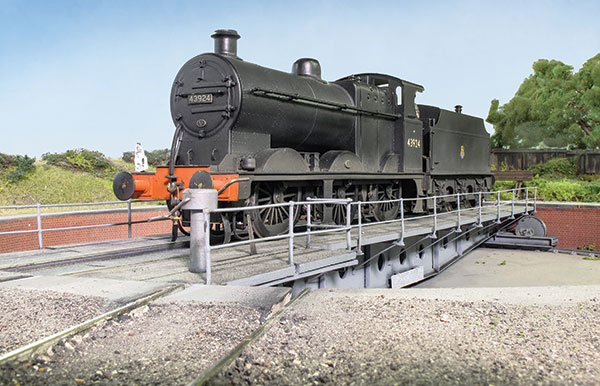 There were also a number of problems with the way the first installation had been carried out, which severely affected the reliability of the layout and made fault-finding harder than it should have been. This is no criticism of those who first wired it up; some things only time and experience teach you.

The group searched for a resolution and, having watched a demonstration of the Model Electronic Railway Group [MERG] digital system using CBUS, we were impressed with its ease of operation, comprehensive functions and low cost. So we decided to draw up a plan and cost if using the system that was then adopted.

While most of the upgrade has fallen to a few group members with more electrical skills, others have helped where they could and many of the MERG controller kits were built by different members of the group.

The upgrade was done in stages as, just to make things trickier, the layout had to remain operational during its conversion. We’re now much happier with the control systems and installation.

There are now five buses running around the layout all using twisted pairs of large section wire, colour coded for CBUS, Up Track Bus, Down Track Bus, Motive Power Depot Track Bus and a Servo Bus. Each Track Bus has its own power supply, with three boosters giving 5A on each bus thus creating three power districts. 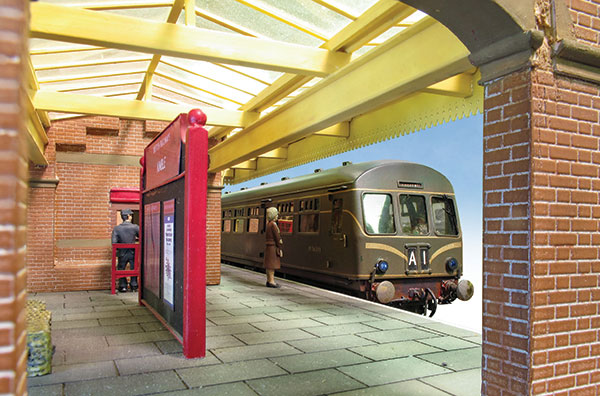 Although there is a central dial in the middle of the layout, operation can take place from one of the five mimic panels, one with push button control of signals and, LEDs showing route set and signal aspect.

Six controllers can be used at once, plugged into any of the seven faceplates placed around the layout. Operators work outside the circuit, which has led to us developing some non-electronic communication systems to allow the fiddle yard operators to tell them which train they have next.

Operators drive to signals operated by the central signal controller. Signals plug into the baseboards and are bus-powered by small servo motors and display the characteristic 'bounce' when returned to stop. Since drivers can’t always see them from the operating position, LEDs on the panels provide extra indication for safety.

One aspect of operation that is often overlooked is the practise required for all those running the layout. Once a month we have an operating evening at the club where we do our best to run the layout as efficiently as possible. As well as entertaining all the other members, it allows us to iron out any problems with rolling stock or control systems. Turning up at a busy show with an untrained team isn’t going to impress the public!

Like most model railways, 'Kimble' is still unfinished. We’ve rebuilt sections over the years to improve them and this will continue for some time. Nothing stops us running trains, however, and we hope to be doing just that at the Warley NEC show and many other exhibitions in the future.

If you see us at a show, feel free to ask questions as there is far too much to detail for a single magazine article. We’ve learnt a lot building this model and are keen to pass on this information to save others making the same mistakes.

To read more about Kimble, see the December 2019 issue of BRM. Download today from www.pocketmags.com/BRM.