Though I have lived in Durham since 1975, my childhood was spent in Hetton Le Hole and Easington Lane, with which I still have strong associations, and my playground was the Hetton Lyons Colliery and its famous railway. Opened in 1822, designed by George Stephenson, the railway was initially built to transport coals from Hetton Lyons Colliery to the staithes on the River Wear at Sunderland, a distance of eight miles. In 1827 and 1833, two new collieries were added to the Hetton Coal Company, Elemore and Eppleton. The railway was in three distinct parts.

The southern end, including the collieries, was locomotive-hauled, meanwhile the middle part was rope-hauled by stationary engines and self-acting inclines, traversing over the highest landscape in the area. The northern part was locomotive-hauled, down to the staithes. The southern end of the railway literally cut the village of Hetton Le Hole in half, with no fences or gates, just flagmen controlling the road crossings. Being on the level, people tended to use it as a thoroughfare! 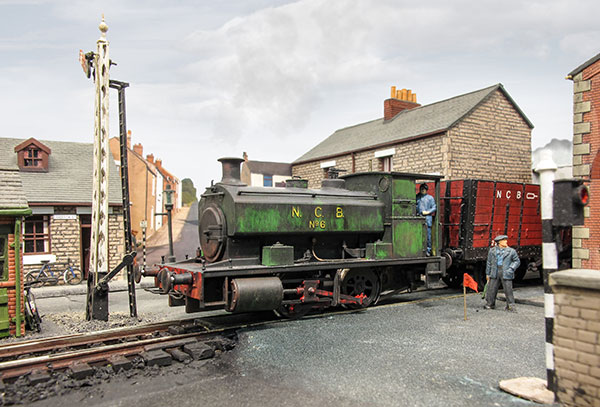 The locomotive shed at Hetton Lyons housed locomotives for the whole of the southern part of the system. It was a Mecca for kids, saying "Can I have a ride mister?" "Jump on son and pull that lever there", and we were off! This started my lifelong interest in railways, especially industrial and my progression into model railways. This is my first exhibition layout and my obvious choice was a colliery railway based loosely, but in some ways faithfully copied, of my memories of the Hetton Railway and its collieries.

A lot of inspiration came from the magnificent colliery model railways produced by a friend, the late Jack Burnard. His prolific number of layouts gave enjoyment to all who viewed them. 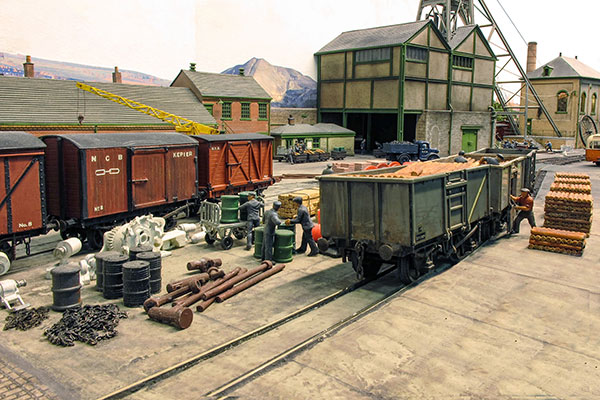 The baseboards for Kepier Colliery were built in four 4ft x 2ft sections using 9mm ply employing a ‘milk crate’ method for lightness and strength and joined together using bolts and captive nuts. The back scene is 15in high to allow for the height of the colliery headgear, while a front ply ‘skirt’ folds up to the same height as the backscene to create a box for easy transportation. This skirt also acts as a solid screwed fixing for the folding gate legs, which are permanently attached to each board, thus replacing the need for support stretchers. To line up the boards on uneven surfaces we use the simple ‘beer mat’ method before tightening up.

The ‘screens’ head shunt and fiddle yard are hidden behind the colliery and the village respectively.

The track consists of SMP with Peco Code 75 turnouts and is laid on cork tiles. Ballasting is a mix of anthracite coal dust and gravel, where necessary. Though the track is flat (except the screens incline), I have built a valley into the boards to give the necessary contours.

Many colliery installations would have used coal duff to build ‘battery’ sides to carry the railway over the valley. 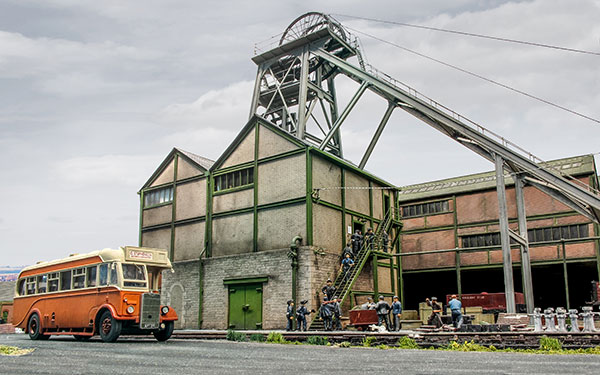 Locomotives are a mix of steam and diesel typical on colliery systems. A number are based on Lambton Hetton steam locomotives that ran at the Hetton Collieries and have the distinctive ‘Lambton’ cabs. These were fitted to enable locomotives to travel through narrow tunnels at the Lambton and Hetton Coal Staithes at Sunderland. The locomotive stock is a mix of proprietary models (Hornby, Dapol, Mainline, Bachmann), kit-built (High Level, Judith Edge, CSP, Nu-Cast, Wills) and all are modified/super-detailed to my requirements.

All rolling stock is typical of a colliery scene and are modified and detailed to represent Kepier Colliery. Most of the weathering of locomotives and rolling stock was done by my son David. He also carried out the building or modification of the transport on the layout, which are an excellent representation of the period. 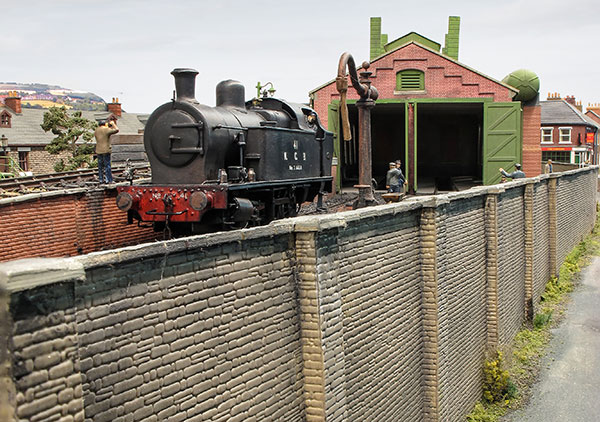 Apart from the locomotive shed and some of the shops, I made all of the buildings. I used card for the shaft buildings, cottages and chapel. All have been covered in brick or stone paper and suitably weathered. The colliery workshops, screens Lancashire boilers, crossing Keeper's Hut and Workmens' Club were made using Plastikard. The shaft headgears were made using Plastruct.

The locomotive shed is a much modified Metcalfe kit with a Plastikard asbestos roof, scratch-built doors and water tank.

The pub is a modified Hornby Skaledale and the shops are a mixture of Metcalfe, Superquick and old Tri-ang kits. Most have had new roofs and windows. Retaining walls are a mix of brick/stone paper and Plastikard.Figures have been strategically placed around the layout to give the impression of a typical weekday at both the colliery and the village. 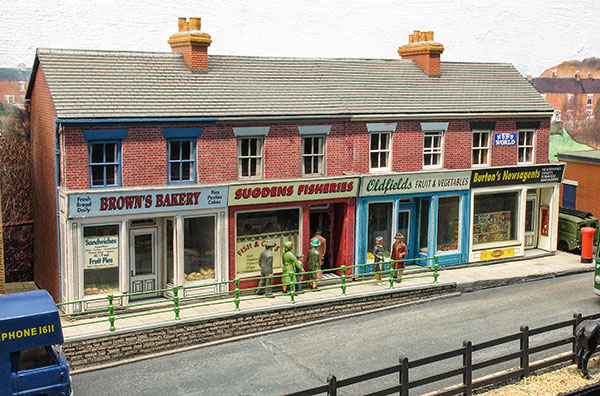 The backscenes are made up using photographs of local colliery villages, printed on matt paper. The sky is a mix of different coloured matt emulsions. The railway ‘battery’ sides and roads are made using suitably-weathered ‘wet and dry’ emery paper over formers. The greenery is a mix of different media and the ‘tufts’ of grass are simply made from old paint pads, suitably coloured green, ‘torn off’ and glued into place.

The layout is simple analogue control and uses Gaugemaster Model W controllers.  It can be operated using two for the main viewing area, one each for the front and rear, but we find that general operation only requires one. We also use a hidden locomotive and controller to push the full wagons through the screens for smooth movement. 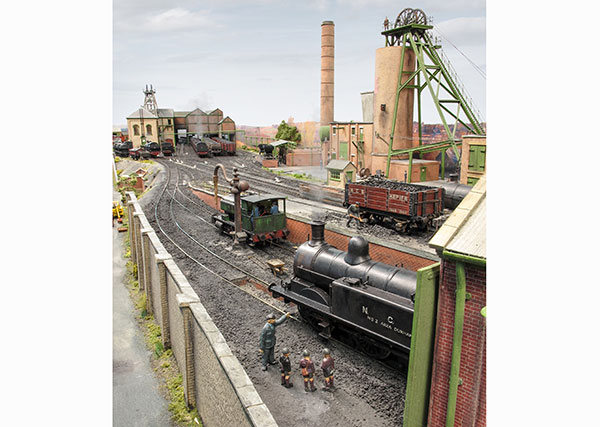 The control panel uses push button switches, via a Capacitor Discharge Unit, operating the Peco live frog turnouts, which have either Peco or SEEP motors with switching attached. There are also isolating switches controlling various parts of the track system. I have used television ‘Scart’ leads for interconnection from the control panel to the layout and ‘doubled up’ the fine wiring connections on the leads to carry the load. I also made the 16V and 12V DC supplies, using suitable transformers, for the controllers, point motors and general lighting.

The layout requires three operators at exhibition; main running, fiddle yard and coal preparation at screens. My preference was the building of the layout, so I tend to do the ‘screens end’, acting as ‘front of house’ spokesman for questions and let my son David and our friend David do the main operating.

The layout started on the circuit in 2007. It has been to 36 venues, including Warley National Model Railway Exhibition and Model Rail Scotland. We’ve been all over the North of England at venues including Wigan, Wakefield, Blackpool, Kendal and most local North East shows, plus also ventured south to Stafford and Chiltern MRE at Stevenage. 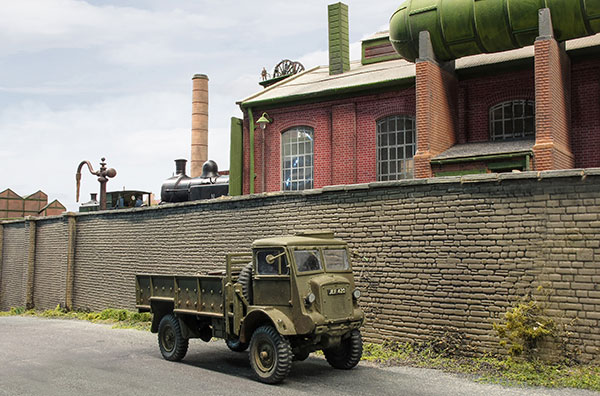 I would like to think that I have captured a memory of a typical North East colliery, its railway and its village. Though I’m pleased with the whole layout, the two shafts and the engine shed are particularly satisfying. I built the downcast headgear from original drawings, which were produced by the Grange Ironworks (1866-1926) in Durham for Walker Colliery on the River Tyne. The company produced colliery equipment that was distributed worldwide. The upcast is a faithful copy of the one which was at South Hetton Colliery. The engine shed is a copy of the one at Hetton Lyons.

To read more about Kepier Colliery, see the May 2020 issue of BRM. Download today from www.pocketmags.com/BRM.