Known for his passion of the local Lincolnshire industry, Graham Morfoot introduces his latest creation, based on the workings of a sugar beet factory.

This layout was never in long-term planning mode. A friend offered me a ready-made baseboard, which he had made for an ‘O-16.5’ layout and due to a house move, it was surplus to his requirements.

My previous layout, ‘Caroline Concrete Works’, was completed, so with time on my hands and looking for a new project, I had an incentive for building a new layout.

I like to use a local interest when building a layout, ideally with an industrial theme. Past layouts have been a potato railway, peat railway, sleeper works and concrete works, all of which were fairly close to my location. So, with this in mind, a representation of a sugar beet processing factory was the theme. In the town where I live there was once a large ‘beet factory’, served by a branch from a main line.

A typical sugar beet factory could process 4,000 tons of beet per day, producing 700 tons of sugar, 400 tons of pulp for animal feed, and molasses. The beet is delivered by rail and road, and the campaign lasted about four months annually. Sadly, this factory has long since been demolished and replaced with a power station. 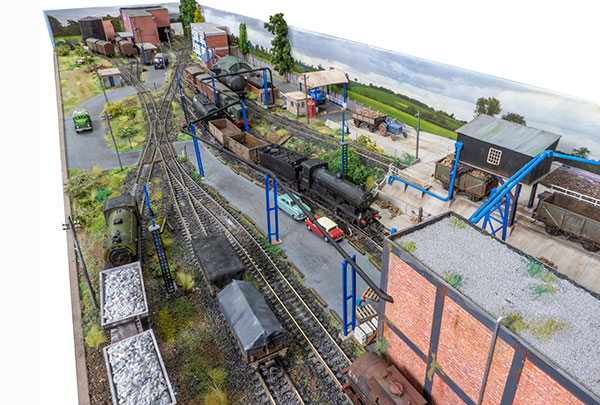 As mentioned above, I was lucky enough to be given the ready-made baseboard, which measures 7ft x 2ft when set up. It is very sturdily made using 8mm plywood and well braced underneath. The design incorporates a fixed hinge at the rear and a removable central hinge on the front. This allows it to be folded onto itself, making a nice compact unit, 3ft 6in long, ideal for transportation to exhibitions. A removable three-road sector plate was added for extra stock storage and versatility. Using trestles from my other layouts, its height is 4ft from the floor.

With the baseboard ready-made and the trackplan formulated, the track was laid. Ideally Code 75 would have been used, but with a large stock of track and points in Code 100, the decision was made. Points are operated with passing contact switches, which power solenoid motors with a Capacitor Discharge Unit (CDU). The track was laid directly on the baseboard and then ballasted with a fine material that represents a stone and ash mixture. There is a raised siding used for a sugar beet discharge facility, which is laid on a compressed foam base. The back-scene board is only 6in high, which does limit the size of buildings and poses a challenge when representing warehouses and factory structures. Good overhead lighting, which is very important for exhibitions, is achieved with LED floodlights suspended on metal brackets. 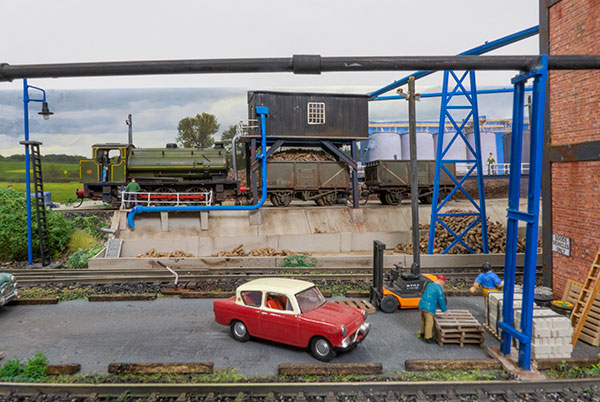 The warehouses on each end of the layout are scratch-built using card and covered with printed brick-effect paper. The sugar beet unloading facility, the lorry weighbridge and rail weighbridge office are also scratch-built. The corrugated store, Portakabin office, plate-layers' hut and yard office are proprietary kits, as are the oil storage tanks. The newly-erected 1960s office block is 3D-printed. I could not find a kit or ready-made model for this, so my son offered to print the front. I gave him a scale drawing and photograph of a prototype. The result is outstanding, but I may be biased.

The overhead pipework is made from styrene strips and tube. There is also a small steam locomotive service facility, which consists of a platform holding a coal supply and a water hydrant. Although the control system is DC without onboard sound, I have installed background sound. There is a mini-speaker with a microchip inside one of the warehouses, which gives a background sound of a working factory. Two sound recording modules are placed out of sight at either end of the layout; they have the sound of a suitable steam whistle recorded on them. They are manually-operated from the rear of the layout but could be operated by an electronic proximity detector or a magnet in the locomotive and reed switch in the track. 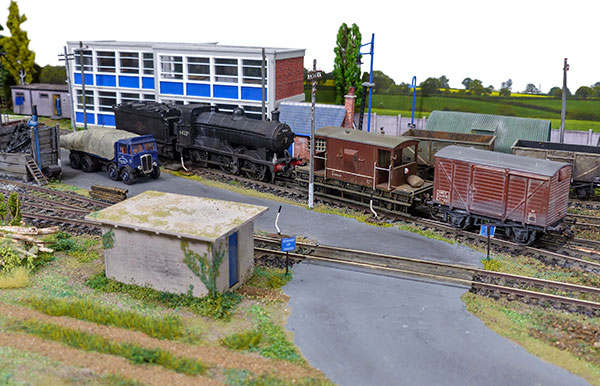 During the campaign, the sugar beet is delivered from the farms in the district by road and rail. With up to 4,000 tons of sugar beet a day being processed at the local factory, I remember the queue of lorries waiting to discharge could be up to a mile long. Rail traffic results in a steady flow of loaded open wagons of sugar beet. Due to the restricted length of fiddle yard and sidings, I have to limit train lengths to a locomotive, four wagons and a guard’s van. A BR locomotive, usually a J6, Ivatt 4MT, Class 08 or 03 brings the train from an off-site BR yard onto the run around siding. It will then take any wagons for dispatch plus the guard’s van off the layout. The company locomotive, a J94, then shunts the wagons to locations on the site. The loaded sugar beet wagons are shunted under a facility which had a manually-operated, high-pressure water jet to wash the beet from the wagon. Other than sugar beet, wagon loads of limestone, fuel oil, coal, packaging materials and machinery will be delivered. Outgoing wagons will be loaded with bagged sugar, molasses and beet pulp, and empties returning to the BR yard. 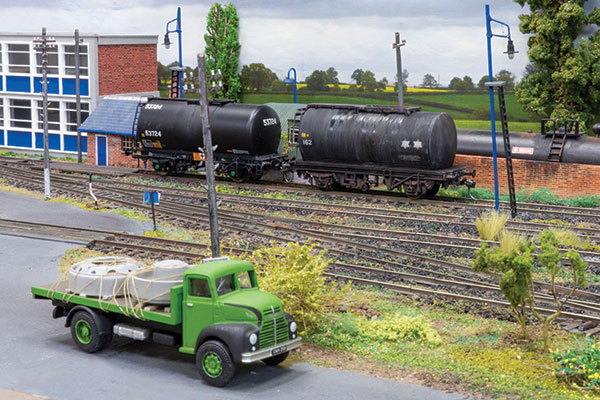 Locomotives are ‘out of the box’, ready-to-run with some weathering. The exception is the J6 which is a Nu-Cast white metal kit. Tony Wright thankfully guided me with its construction. All the wagons are ready-made, with various levels of weathering. I use Kaydee couplers with permanent magnets under the track. This usually gives a realistic hands-free operation, provided accurate setting up of the couplings is done when they are installed on the wagons.

This is now my sixth exhibition layout. ‘Tates’, ‘Boston Sleeper Works’ and ‘Ben Moor Foot Peat’ railway now have new homes, which leaves me with ‘Billingborough’, ‘Caroline Concrete’ works and this one. The more recent layouts are named after family members, so Ella is yet another. Future layouts are always uncertain and will depend on spontaneous inspiration, but it is usually an industrial theme based in the East Midlands.