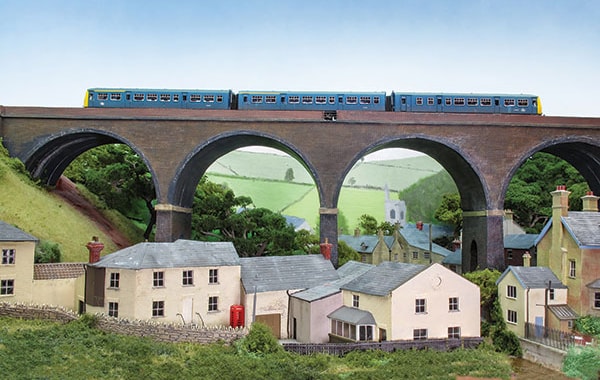 Struggling to build his vision in a defined space, Andrew Bartlett changed scale to discover a horizon of new opportunities.

There are various things in life that make people stop and take a good look, perhaps even sometimes draw a small crowd. For example, a large aircraft passing low overhead will cause people to momentarily freeze and look up in sheer wonderment. It is something that is naturally quite exciting, even if you know nothing at all about aeroplanes! Given the right set of circumstances, the passing of a train can also attract an appreciative audience. For example, how about a long train, perhaps very heavy, making lots of noise, rounding a gentle curve atop of an embankment, passing over a large bridge structure and then finally disappearing into the darkness of a tunnel? That would undoubtedly make one or two people stop and stare. What is more, if another train then appeared, travelling in the opposite direction and passed by, right next to the other train, the level of interest would probably increase significantly. 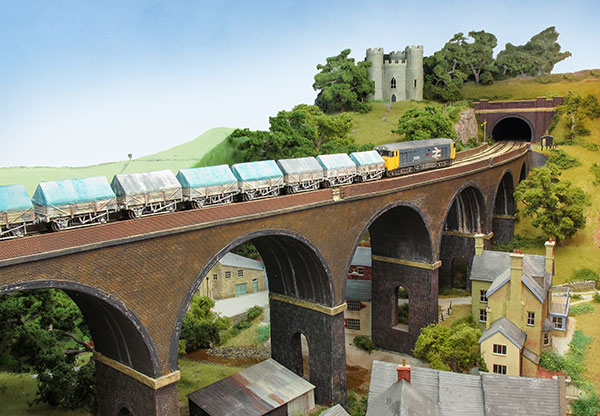 Back in 2012, this was the vision I had built up in my head for a new model railway project. At the time, I was modelling in 4mm scale and had built a small Western Region branch line layout in EM featuring china clay trains with a strong emphasis on the shunting of goods wagons. That layout had given me a good 10 years’ worth of pleasure and I had built up a reasonable collection of kit-built stock. However, I did fancy a change, and, for something completely different, I wanted to create a section of main line railway where I could literally just watch trains go past, without having to stand there with a controller in my hand. As I only had the space that was currently occupied by my existing branch line layout, it soon became obvious that to accommodate my planned new main line ‘roundy roundy’, I would have to change to a smaller scale.

Construction of the new layout began almost immediately as I had already done most of the planning. The whole idea behind moving down to N gauge was to fit a spacious-looking main line into the space previously occupied by a small branch line and there were several key features that I wished to include in the new project, the main one being a substantial viaduct. In order to accommodate this viaduct in a realistic manner, quite a lot of scenery was going to have to be well below the level of the track. This in itself was another key feature for me as I like the very three-dimensional effect that it creates as trains pass through. It is, however, very important to allow for this at the very beginning of the construction stage as any land that is lower than the track has to be taken into consideration when building the baseboards. 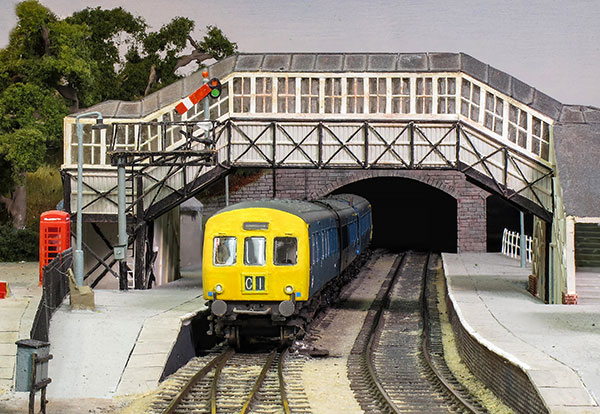 My trackbed is chipboard, which is built up on wooden blocks several inches above the initial flat wooden frame that forms the base of the layout. Any land that is higher than the level of the track can be easily added at absolutely any stage of the layout construction, but for anything below track, it is vital to pre-plan.

The scenic part of the layout is 10ft in length by 18in wide. This consists of two baseboards both 5ft long. In addition to the two scenic boards, there are two boards of similar size that form the storage sidings behind, as well as two semi-circular boards that form a continuous run. These semi-circular boards carry a curve with a radius of 2ft (4ft wide). I had experimented and found this was necessary to prevent any kind of locking between vehicles, particularly coaching stock, that utilised my hook and bar close-coupling system. Therefore, the overall size of the layout is about 14ft by slightly over 4ft wide. The track through the scenic section is very simple, comprising of double track for the main running lines, between which there is a trailing crossover. There is also a goods loop in one direction and a trailing siding from the other running line. In order to make the scene as realistic as possible, I placed a strong importance in only having gentle curves within the scenic section. The track is ballasted using very fine white sand that was being sold for use in tropical fish tanks. 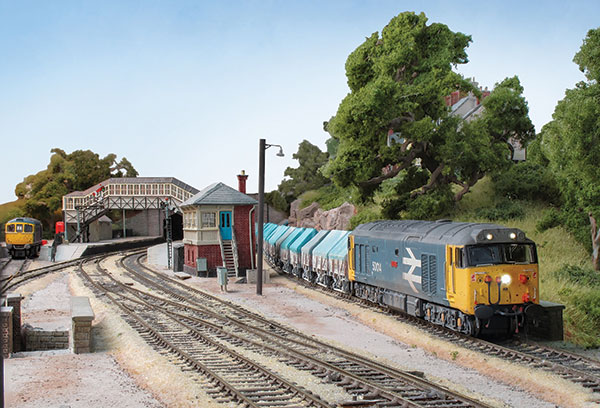 Trees are made from lengths of very thin wire which are twisted together to form the required shape before having a mix of plaster and PVA brushed over the trunk. The foliage is teased-out Woodland Scenics, added in small clumps to the branches.

Like all my previous layouts, and probably any that emerge in the future, 'Blueball Summit' is a purely fictitious location based somewhere in the West Country during the 1970s and early 1980s. It is, quite unashamedly, an attempt to rekindle teenage memories of watching a seemingly endless procession of holiday expresses, together with quite a lot more freight trains than there actually were! Despite steam having given way to diesel traction, it was still very much a ‘traditional’ railway with all the associated atmosphere such as mechanical signalling, locomotive haulage of passenger trains and drivers that would invite you up onto the footplate! 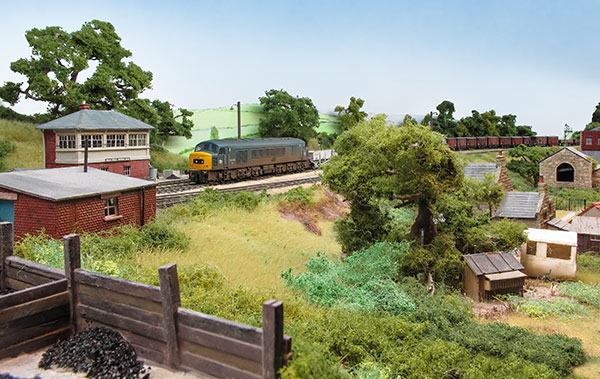 All the buildings and structures on this new layout are built from Plastikard, with roofing slates made from strips of overlapped paper. Some of the windows are made from 0.3 microstrip (very thin strips of plastic), although some, like the signal box, have utilized brass etchings for window detail. I like the character of groups of old buildings that sit together in a cluster, with differing roof angles and walls.  Most, such as the mill, the pub, and various cottages are based on real ones from around the Stroud area, where I live. The castle on top of the hill is based on Blaise Castle at Bristol. The station footbridge was inspired by the one at Bodmin Road. That’s why it has a bracket signal right in front of it, just like the real one had during the 1970s and early '80s. Talking of signals, they are all assembled from brass etchings from Model Signal Engineering and no, they don’t work. I am not that clever! 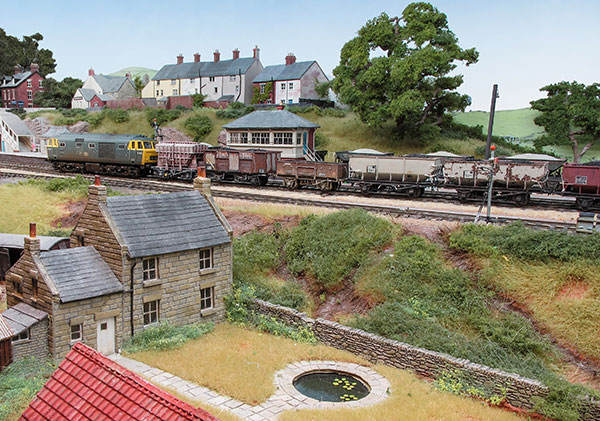 The tunnel mouth is based upon Somerton. There is a lovely picture of a Western diesel emerging from the western portal in a book called ‘Western Glory’ by Chris Chapman. I drew up a plan from what I could see in the picture. Like all the plans I draw up to work from, it’s just a reasonable approximation of the real thing, utilizing a combination of estimates and guesswork! I situated the tunnel and viaduct very close together for maximum dramatic effect! I love watching trains emerge from the tunnel and then almost immediately run across the viaduct. At the non-scenic end of the tunnel, a long cover made from Plastikard sits over the track. Therefore, when you peer into the tunnel mouth, it is pitch black.

The viaduct is constructed from 1mm Plastikard with lots of internal bracing and is actually very strong. It is 160mm high, therefore representing a height of 80ft above the stream. 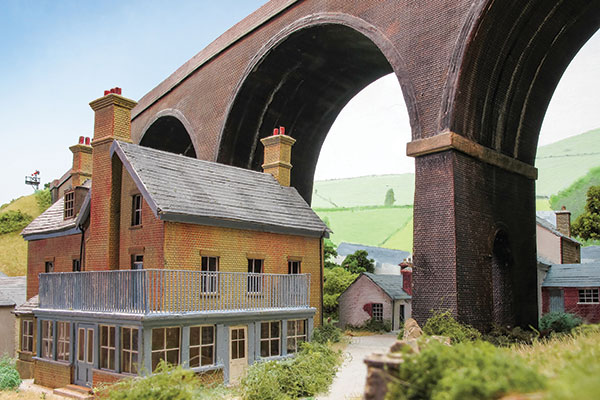 Like all my buildings, reference was made to pictures in order to be sure that it was correctly proportioned. Rough dimensions of a given viaduct are fairly easy to calculate, for example by viewing a picture of a passenger train passing over. The length of the individual coaches will be easy to research and then the bridge structure itself can be scaled from the train.

The two outside faces were made up first, requiring several pieces of Plastikard sheet to be fixed together. The profile of the viaduct was then marked out using a rule and compass. This was then carefully cut out with a scalpel. These two side profiles were then fixed apart from each other using simple Plastikard ‘spacers’ to represent the width of the viaduct. The highest of these ‘spacers’ being the actual trackbed itself. This basic structure was then clad in thinner embossed Plastikard to represent the brickwork. This should bend fairly easily to form the underside of the arches.

My viaduct is partly straight and partly curved. Curved viaducts present a challenge in that the two outside faces will be of slightly differing dimensions. The inside face will be less than the outside face. I was surprised to find that this was apparent even as I constructed mine in N gauge and some ‘trial and error’ was required. Finally, the completed structure was screwed down to the baseboard and the surrounding scenery was then built up around it. 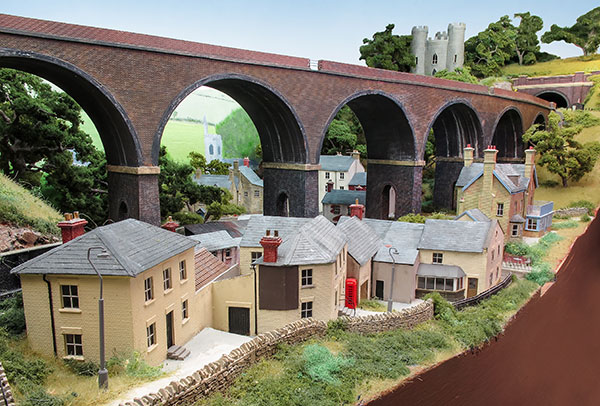 Now that the layout is largely complete, I can concentrate on building up my collection of locomotives and rolling stock. I have a very strong interest in BR wagons and enjoy modifying and improving ready-to-run items as well as building from kits. My favourite train is my rake of clayhood wagons, which had a strong affiliation with Cornwall and Devon.

To read more about Blueball Summit, see the March 2020 issue of BRM. Download today from www.pocketmags.com/BRM.