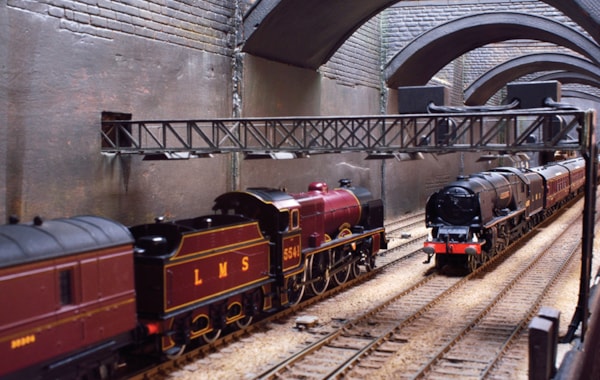 Liverpool Lime Street is one of the most advanced DC-controlled EM gauge layouts on the exhibition circuit. It has an automated fiddle yard and is fitted with CCTV. 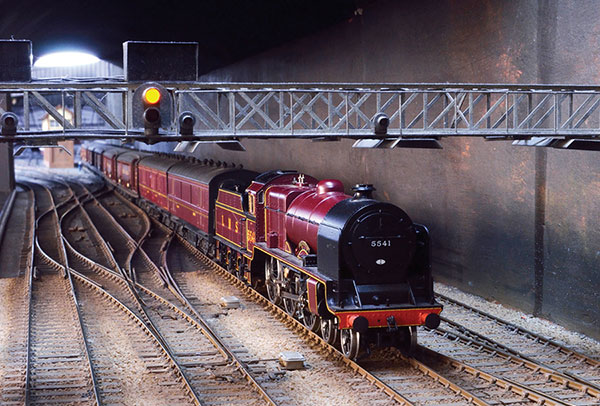 An interest, an idea

Liverpool Lime Street is an EM gauge layout built by John Holden, Les Green, Steve Hewitt and Rob Harrison, each bringing their particular skills that have enhanced the project. After the interruption in railway modelling due to the usual distractions and the subsequent bringing up of a family, John's main interest was LMS carriages. He first set about building each of the main trains associated with Lime Street just after the war. He managed to build the 'Merseyside Express', and 'The Manxman', each vehicle in the train being as the prototype in the period he modelled. But when he started to build the layout, he found his spare time disappearing into a black hole, and had no time for carriage construction. Fortunately, Hornby and Bachmann came to the rescue with excellent renditions of both locomotives and stock for Lime Street. There are some carriage types they don't cover, but for the time being they can manage. Re-wheeling, weathering, and in some cases different couplings are a necessity for EM gauge. 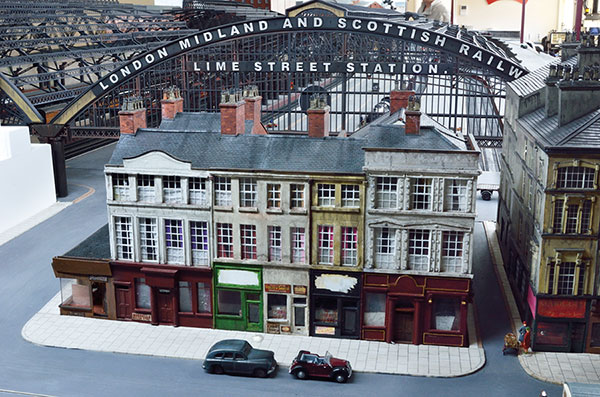 A view of some of the shops along Lime Street modelled in a 'worse for wear' condition. A tram shuttles passengers along the road from left to right. Weathering of the buildings was completed by Rob Harrison.

Les volunteered to tackle the station roof. This represented a massive amount of work and he quietly beavered away on his computer designing this fantastic piece of modelling. The roof construction can be divided into two parts - firstly the supporting columns and secondly the roof. The columns were developed first, using a 3D CAD package to design them. There are 61 columns to 21 different designs. Each column's artwork was sent to a firm who produced patterns in resin using a process known as 'Rapid Prototyping'. From these patterns, all the columns were produced by Unit Models of Keighley.
The roof itself, again was designed on Les's computer's 3D CAD package from which he generated the 2D artwork to send to an etching company who produced around 40 A3-sized etched sheets in nickel silver. From these, and a 100 metres of 0.7mm nickel silver wire, a working party of four team members set about soldering up sub assemblies. Les fabricated all these into 40 odd 'bowstrings girders' that span the columns. Finally these were all built up into eight roof sections. Doesn't sound much when you say it quick but the logistics of this were mind boggling. There were around 13,000 soldered joints, 6,000 components and 130 meters of seam-soldered girders. 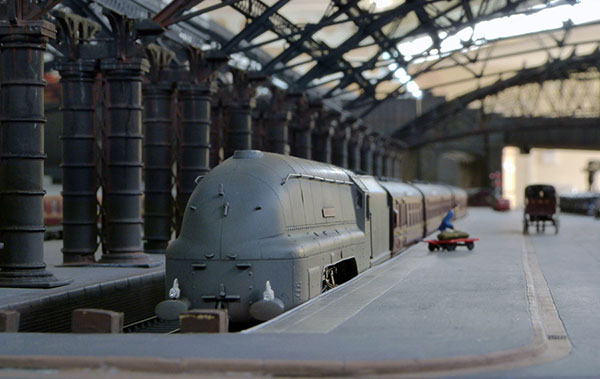 Just arrived in the station is a streamlined LMS Coronation 'Pacific', in a very weathered wartime black livery. A platform goods trolley can be seen right, ready to take luggage from the guards compartment of the first coach, whilst a horse and cart awaits its next collection patiently.

If you visit exhibitions, you may have seen Steve Hewitt on demonstration stands with his signals. These he makes to high standards, both in looks and operation. They even feature illuminated lamps using fibre optics. This was another man John had to encourage to join the team, resulting in Lime Street having a set of platform starter signals. The gantry with 12 arms is a work of art, as is the tiny LNWR ground signal with two working arms (illuminated of course). For all these signals, a custom version of servo controller that handles 16 signals on each board was used. Liverpool Lime Street has 32 working semaphores, two boards are used. The signals, along with the existing colour light signals are automatically set by the router when setting up a route, and restored either by clearing the set route, or by 'IRDOT trip' (Heathcote Electronics Infra Red train detection system). Signalling is automatic. If you want to bring a train or light engine up to a red signal, there is a 'Signal inhibit' button you press after setting any given route (within a set time period). Pressing that button will stop the associated signal from changing. One of Steve's lesser known talents is in the production of a train operating card system and to that end Steve and John built a running order for the layout. 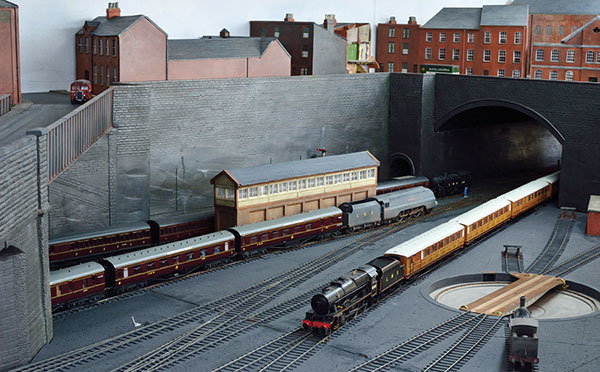 Liverpool Lime Street boasts an impressive signal box, though on a layout of this size with such large bridges represented in full, its proportions look somewhat less significant. Seen right of the picture is the turntable, under construction, though this is now fully operational on the layout.

Rob Harrison made his mark on the layout with his weathering techniques. The road vehicles, roadways and buildings have all come under his eye for attention, making them look more like models and less like 'out of the box' toys. His skill with bird muck is unbelievable!

The platform surfaces and sides of the big bridges over the station throat were first mocked up in card and later replaced with the structures. The platform surfaces with 1.5mm birch plywood, and the bridge sides with plastic card. This, like everything else on the layout was a large task. There are 11 platforms with an average length of 8ft, so 88ft of platform edge had to be made. These have 'corbelling' under the edging flags, and in some cases there are pipes and trunking runs alongside too. The bridges, after facing with plastic card, were detailed with 'T'-section plastic strip. The pavements over the bridges and down Skelhorne Street were all scribed.
Liverpool Lime Street has a road traffic system, which started life in an embryonic form. Vehicles now travel round the roads and uniquely for a model railway, as on the prototype, up and down platform 7/8. These are interspersed with a tram shuttling up and down Lime Street. 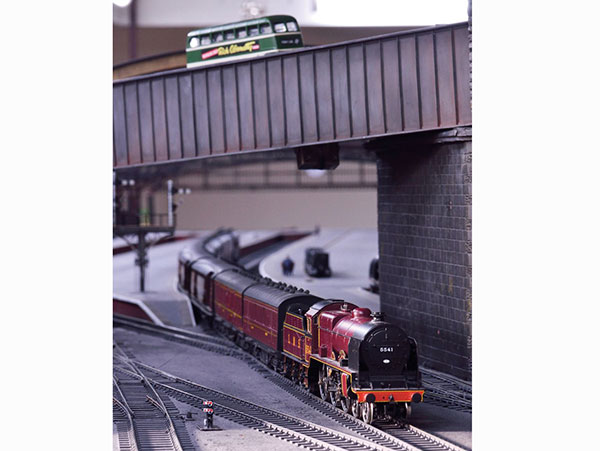 LMS 'Patriot' No. 5541 Duke of Sutherland again, with its travelling post office. Ground signals made by Steve Hewitt are operational and have a realistic 'bounce' effect when activated from the servo motors.

Top tip
Setting up a layout at an exhibition is always a stressful time and anything that can make that process easier is always welcome. Something the team found to ease the process was the use of a spinning laser, the type commonly used in the building trade. With the addition of 'targets' on each baseboard leg, they are now able to set up the layout without needing to check for level, once the laser is set up. This usually takes a short time, to the great puzzlement of other layout operators! But once the laser is set, the boards fly up.

Conclusion
Everything on Liverpool Lime Street is a big job, from point rodding to barrow crossings, yard lamps, ballasting and all the paraphernalia associated with a railway. Add to this figures, dogs, cats, pigeons and seagulls and you can see that a project on this scale takes years to complete. It's not for the faint-hearted, but dedication can go a long way when building such a project.