Set in the mid-1980s, this compressed model is conspicuous for its authentic mid-century modern architecture.

The distinctive chug of a Dorman 2RB diesel and the clatter of half a dozen empty skips breaks the peace and quiet of a back garden in the sleepy Bedfordshire town of Leighton Buzzard.

The Leighton Buzzard Narrow Gauge Railway was built in 1919 to carry sand from pits around the town to the main line railway. When built, it ran alongside roads through open countryside. The town expanded rapidly in the 1960s and 70s, engulfing the railway.

'Derwent Road' is my second exhibition layout and it was inspired by visits to the Leighton Buzzard line, but my model is of a fictitious railway built with a gauge of 18in as opposed to the nominal 2ft of the real line. The layout is set in 1985 as this would still allow passenger trains without continuous brakes to be used. 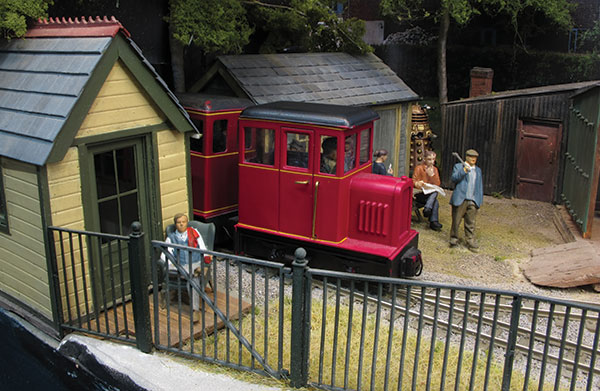 I had a clear vision of how I wanted this layout to look and operate. AnyRail was used to design the trackplan and then some sketches were produced, the finished layout being very close to the original ideas.

A balance between track and scenery needed to be set - a run round loop and three sidings on one board and the main line running through the second board would allow room for some houses and a road.

The initial track plan had no gradients. However, while on a train at Leighton Buzzard it seemed that we needed a slope.  I experimented with sensible gradients but it was difficult to see that the track was changing height, so we have ended up with the steepest part being about 5%. The track bed was cut and elevated to give a slope up from the station and then down again in the fiddle yard.

Lightweight construction using 9mm ply worked well on my 'Buttermere Mining' layout. The 'Derwent Road' baseboards were again built from ply cut by a local timber merchant, but this time 6mm ply was used. 'Buttermere Mining' was vulnerable to damage in transit and this had been a concern, so the boards on 'Derwent Road’ have a permanent top and back. This makes the boards quite rigid and the scenic bits are protected. Removable end boards protect rail ends when the boards are being moved. 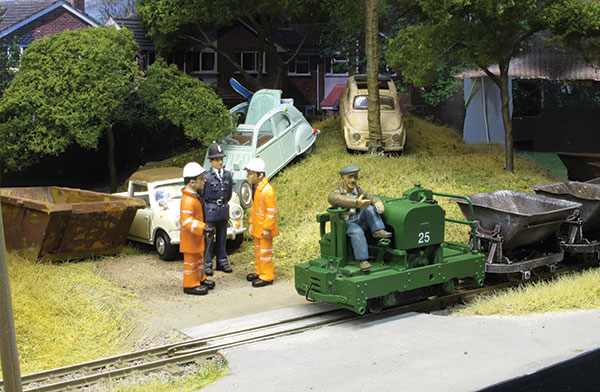 The two boards are 105cm long, 45cm wide and 42cm high, with the scenic section of the 2.1m layout set at about 1.85m. Two pieces of aluminum 'H' girder are laid between a pair of metal trestles and the boards sit on top of the girders. A single pair of bolts join the baseboards together and align the track.

Peco 09 track has been used, laid on Woodland Scenics foam roadbed. The points have been modified to make them more DCC-friendly. The out-front points are moved by Cobalt Digital motors mounted under the baseboard. The ones in the fiddle yard use the Cobalt SS surface-mounted motors connected to the Cobalt controllers.

To reduce setup time, the lights, DCC system, and sound system are built-in. A pair of cables run from a floor-mounted power box to the layout to take low voltage power to the station board, and a couple of jumpers run between the boards. 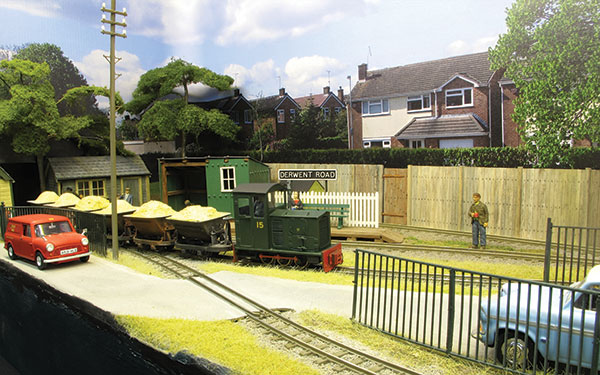 Trains can be running in less than ten minutes after the car is unloaded, and the layout can be ready for the public within half an hour, which makes exhibiting the layout really simple.

On 'Derwent Road' we use a Digitrax DCS240 Command Station and Uhlenbrock Daisy II throttles. Initially, DCC throttles were being used to drive trains, control sounds and select routes to set points. However, at the first show it was apparent that too many button presses were needed, making operation tiring. A panel to control the points was added using a CML DTM30, and, after a bit of programming, routes could now be triggered by a bank of push buttons with LEDs to confirm when the route had been set. The throttle is now only used to drive the trains. A while back I had picked up a Daisy II throttle on eBay, which allows you to store each locomotive in the throttle and customise the buttons for DCC functions for each locomotive. Once set up, the Daisy throttle was found to be far more operator-friendly than my Digitrax DT402/500 throttles and are now the throttle of choice on the layout. 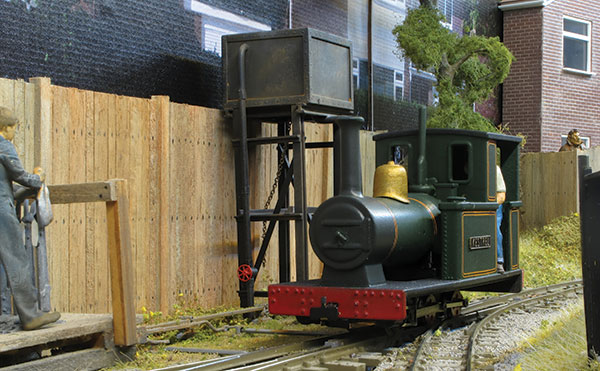 Some of the locomotives have sound decoders fitted. 09 locomotives are quite small and in some cases there isn’t enough space to accommodate a decoder and speaker. There is also a background soundtrack playing from an MP3 player through speakers at each end of the layout.  The soundtrack is generated using a program called Atmosphere which allows different sounds to be selected and mixed.  A 60-minute sound clip was generated and transferred onto an SD card to play in the MP3 player.

'Buttermere Mining' had used fluorescent tubes - for 'Derwent Road' I wanted to try LED lighting. The tape LED lights come in two ‘temperatures’ - warm and cold. After tests, a mixture of three strips of warm and one of cold gave the desired colour and brightness. The lights were in place before the scenery was built. 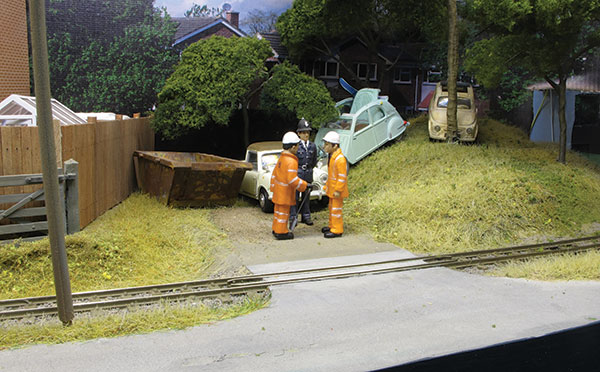 The natural operation position is the front left-hand corner of the layout, but we found that operators had to move to the back of the layout to stop trains in the correct place in the hidden sidings. A bit of research on eBay found some CCTV systems for lorries, and an order was placed. Each fiddle yard has a camera with a single 10in screen; a button selects the active camera.

With regards to the tea van, the idea came from the ones that used to run on the Fairbourne and Talyllyn Railways. It's delivered at the start of each day. Once parked in the back siding, a DCC-controlled servo raises the hatch ready to serve refreshments. It is taken back down the line after the last passenger train of the day. 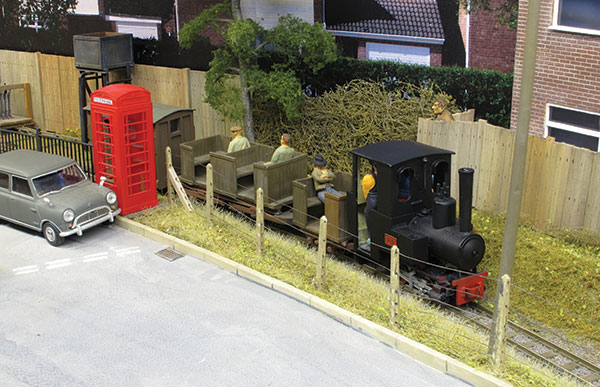 I have been working in 09 since 2010. The roster is made up of a mixture of kits, 3D prints and scratch-built items. Some are models of prototypes and some are based on an idea that has then been developed. A stack of boxfiles are used to store bits that might end up in a model. The stock was painted using aerosol cans or airbrush and a mixture of acrylic and enamel paints. Decals/transfers were applied and then a coat of Testor’s Dullcote. Greenwich couplers are used on rolling stock, with most of the locomotives only having a brass pin.  Tiny neodymium magnets have been placed strategically to allow hands-free uncoupling, but there are wooden skewers with a fine piece of brass wire for manual uncoupling if needed.

The premise is that the sand and passenger trains operate together on the line. Sand trains run the entire length of the line from sand pit to main line interchange. Empty trains run clockwise, and loaded trains run anti-clockwise. Preservation Society trains only run as far as 'Derwent Road' where they then run round and reverse. Light engine movements and engineering trains run whenever there is a space. There are two parts to the fiddle yard; one for sand trains and one for the Preservation Society trains. A second operator swaps locomotives in the fiddle yard in between chatting to the watching throng and getting tea and cakes.

The signature buildings are the 1970s estate houses. They are built of brick with wooden frames under the windows. I didn’t have access to drawings of the houses but had a large number of photographs taken on visits to Leighton Buzzard. By counting bricks it is quite easy to produce a working drawing. The houses were still quite large so they were scaled down a bit to make them fit better. Plain styrene sheet was used to build a skeleton and then embossed sheet was used for the brick parts. Window frames were built up onto a sheet of glass using styrene strip and solvent. Once set, they were carefully separated from the glass and glued onto the house’s skeleton. The other buildings were constructed from styrene, mount board and strip wood.

There are a lot of fences on 'Derwent Road'. The metal ones are all Peco, mainly the excellent spear fencing, some of it with the spears removed. The wooden ones were built from strip wood, cut to length with a NWSL Chopper, glued using a cardboard jig into panels, which were then assembled into complete fences. Brass wire was inserted into the bottom of some planks to help plant the fence. They were treated with a mixture of alcohol and ink, followed by various coloured acrylic paints. The finishing touch was a deft dab from a very fine marker pen to represent nails and screws. 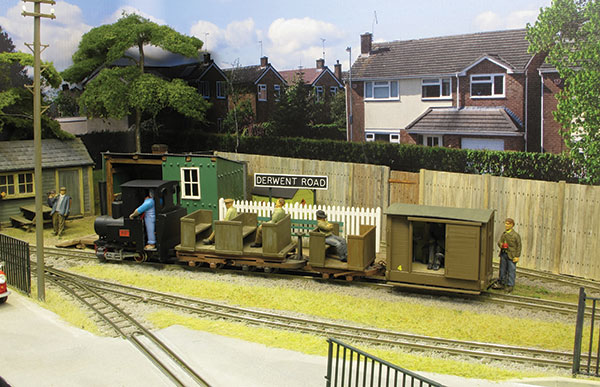 Blue foam sheet was used to build a rough shape and DAS was then used to finish off the contours. The surface was painted and layers of static grass and scenic ground foam were used for ground cover. Trees were built using armatures of florist’s wire, covered with textured paint and foam foliage. Mount Board was used for roads with texture applied. Kerb stones are styrene strip.

I wanted to try a photographic backscene, Thornbury is a town with houses that are the same as the ones in Leighton Buzzard and is 20 minutes from where I live. Using a DSLR camera, six pictures were taken, stitched together in Photoshop and then printed by a local printer. When completed, the print was glued onto the backscene.

There is a vast range of really excellent 7mm:1ft road vehicles available. 'Derwent Road' needs about seven or eight to be properly ‘dressed’. A new shiny vehicle is usually dismantled, and the interior might get painted. Exterior bits get a coat of Dullcote to kill the shine and then it is reassembled. 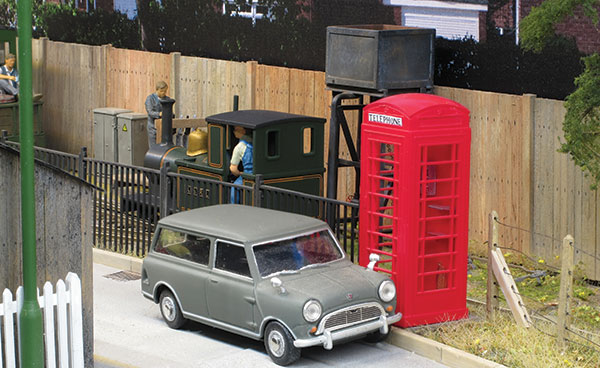 The layout has had a good reception at exhibitions. My thanks go to exhibition managers for booking the layout, to people at exhibitions for their kind and generous comments, to Chris, Harvey and Andrew for helping to set up and run the layout at shows and to Elaine for putting up with my trains in our home.

Thoughts for future projects include another 7mm:1ft layout representing a locomotive builders'/repairer's establishment, possibly with 9mm and 14mm gauge tracks, and a micro layout estate railway in OO6.5…

To read more about Derwent Road, see the September 2019 issue of BRM. Download today from www.pocketmags.com/BRM.