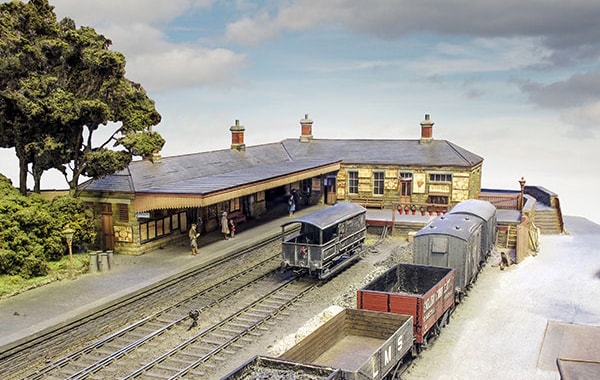 The origins of The North London Group’s layout, 'Bodmin' go back to the late-1970s. Having built a model of an imaginary station on a non-existent main line (Heckmondwike, Yorkshire, on the Midland Railway's projected line from Dewsbury to Bradford), the group decided to construct an accurate scale model of a real station in the form of a branch terminus. It would be a contrast to the through main line format of the earlier layout. The prototype chosen was the Great Western terminus at Bodmin in Cornwall. Having selected that station, the first challenge was finding out how it looked 50 or more years previously, as we intended that our model should be as accurate as we could reasonably make it. 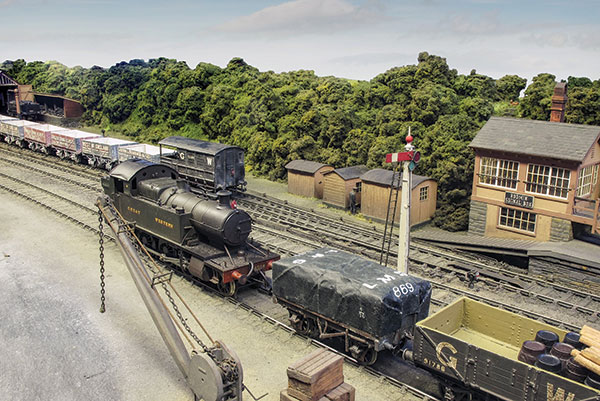 The layout sits on a custom-made metal frame. This is perhaps over-engineered, but it has certainly stood the test of time. From this frame, a gantry structure stretches over the layout. This gantry contains fluorescent lighting to ensure the layout is well lit. Baseboards are made of a chipboard surface with a 2in x 1in softwood frame. This was standard practice when the layout was built. Again, these boards have stood the test of time. The prototype station was built on the top of a hill that was levelled. This explains why the station and yard are in a cutting. Very considerable effort was put into the layout's construction. This is seen in the layout photographs – everything had to be as accurate as possible. The station and yard are 13ft 6in long plus the fiddle yard. Total length is 20ft and width just under 4ft.

Track has been constructed to a gauge of 18.83mm to P4 standards. Code 75 rail is soldered to rivets in ply sleepers and then the rivets covered with two-bolt whitemetal chairs. Because 'Bodmin' is an accurate model of a real station, the group took care to reproduce as closely as possible the design and construction of the pointwork. 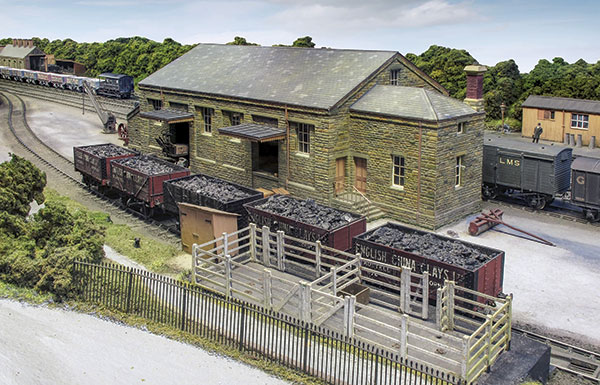 The group decided that train control and signalling must be integrated. All switching of circuits is achieved through the signal lever frame. The idea is that the signalman has only to ‘think signals’ and the train driver then drives his train as authorised by the signals.

The signal box lever frame is fully-interlocked electrically. Communication between the signalman and the fiddle yard is by means of block instruments. There are two sets of instruments at the fiddle yard end representing Bodmin Road and Boscarne Junction.

To assist the viewing public in understanding the train movements, we have installed an LCD display. Synchronised with the timetable, this enables the public to understand the operating schedule as each train on the layout is displayed on the monitor screen.

Construction of many parts of the layout was covered many years ago and many modelling techniques and materials, now almost standard practice, were simply not available when the model was built. Despite this, the layout presents a convincing portrayal that has stood the test of time exceptionally well. 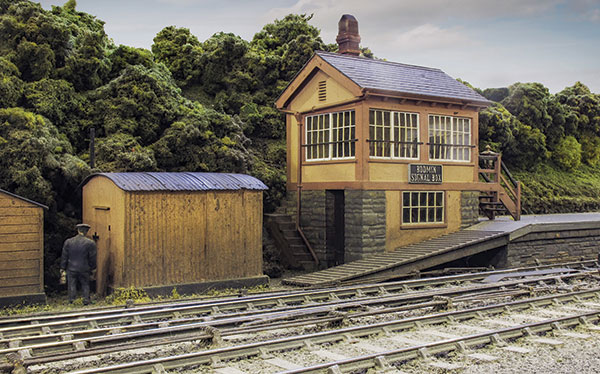 All the buildings at Bodmin were constructed of a very distinctive local stone with high relief and an interesting colouring of basic greenish grey with facets of rust colour. The model buildings were constructed from Plastikard, applying individual stones of varying thickness to build up the walls. Then each stone was carved in situ to produce the chunky appearance of the roughly cut stone. Each stone was then individually painted in acrylics to carefully bring out the high points and relief in the stonework. The walls and bridges were all subtly weathered.

When modelling a specific prototype at a set time it is important to use prototypical locomotives and stock. The model is set in 1928 after the GWR 45XX class locomotives were transferred to the line. We have three of these – two scratch-built before the Mitchell kit became available and one of the latter kits. All are compensated (as are all locomotives and stock) and use Portescap motors operated on DC using ECM Compspeed F controllers (with the feedback switched off). None has failed on us in 40 years. The other stalwart of the line is a GWR 57XX 0-6-0 'Pannier'; a Mainline body re-worked to remove the post-War top feed on a scratch-built chassis. This really ought to be a GWR 2021 class 'Pannier', but no accurate or original drawings survive for this class, so we have been unable to build an accurate model. 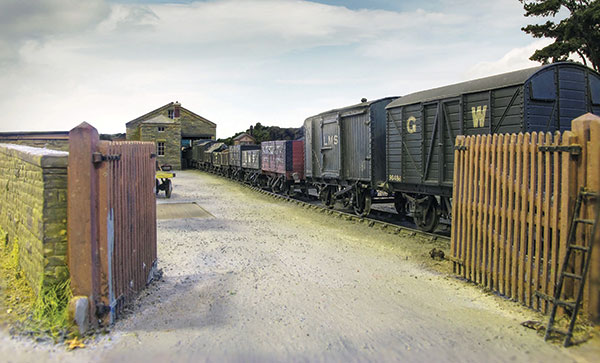 Other locomotives visiting the line during the timetable sequence are a 'Bulldog' on a military special, and ex-LSWR 0-4-4T 02 locomotives on through workings. In reality, it is most likely that all through traffic to the line would hand over to one of the 45XXs, but we allow these for variety.

Information on this line in the inter-War period is still becoming available and we now know that although GWR coaches regularly travelled through to Wadebridge, the through workings were always handled by GW locomotives and SR locomotives would not be seen at Bodmin GWR. Furthermore, there was one daily working of an auto train up the branch with a 517 class (later 48XX) 0-4-2T in charge. This was as part of one of those long diagrams the GWR were so fond of, taking a Truro locomotive on several branches around Cornwall. The regular branch coaches used in 1928 were a brand new ‘B Set’ of a diagram not available in kit form, so this was virtually scratch-built around a basic skeleton of a body shell.

Wagon stock was also carefully researched. The GWR was not part of the ‘common user’ arrangement for cattle vans, so all such traffic on the line, except any loaded in SR territory would, be in GWR vehicles. However, it is the china clay traffic that required the most research. This was the primary revenue source for the line and originated principally at Wenford Bridge, handing over to the GWR at Boscarne Junction. Post-WWI, the industry was segmented and traffic was carried in a mixture of private owner wagons. However, the English China Clay (ECC) company was formed in 1919, merging the major operators and absorbing the smaller companies. The newly-formed business had operational priorities and private owner wagons were not re-liveried overnight (in fact, we doubt if many were ever re-lettered), therefore, in our period there would be a mix of pre-ECC wagons and some re-liveried and some bought new in their livery. It also appears that ECC moved away from using its own wagon fleet for china clay towards using dedicated GWR wagons built specifically for the purpose, in the mid-1930s. The necessary wagons were scratch-built from Slater's Plastikard sheet, and used transfers designed and produced by PC models specifically for the project. 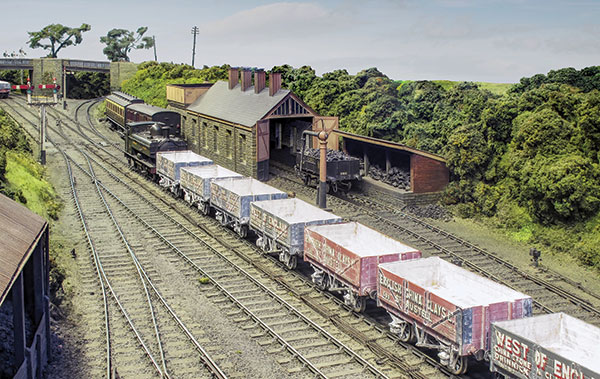 Operationally, because of the gradients of the line, loaded trains are limited in weight for the run from Boscarne Junction, so many trains are split and made up at Bodmin before onward movement. The track layout precludes movement down the Boscarne Branch from all but the branch platform road, so again this makes complicated shunting of freight traffic necessary. All movements are controlled by the correct signals.

Although there are some ‘fixed sets’ of wagons coupled together by three-link or screw couplings, the ends of these rakes and all other stock is fitted with Alex Jackson (AJ) couplings, which are operated by electro magnets. These require regular maintenance, especially after stock is packed away between operating sessions, but are virtually invisible. During the design phase, considerable thought was given as to the position of the uncoupling electro magnets to minimise un-prototypical shunting.

This layout was first exhibited at the National Model Railway Exhibition Easter Show at Central Hall Westminster in 1980, some 40 years ago! 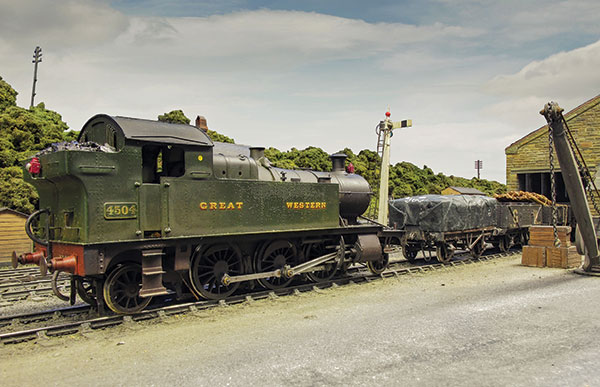 During an exhibition, the layout operates with four persons: a signalman operating the turnouts, interlocking and signals using the lever frame, two drivers and one fiddle yard operator. In addition, we have found that if we have someone at the end of the layout they can answer questions from the public and this allows for the operators to concentrate on their tasks and produce a professionally-presented running layout. The schedule of train movements is fairly intensive and demands keen concentration by the operators. The operating sequence is based on the prototype working timetable with some additional ‘as required’ Q trains. A card system is used by the operators explaining what is required and a display informs the public of the time of day and the purpose of the move. If I were to be critical, perhaps the china clay traffic is a little heavy for 1928 as is the volume of special traffic, but these make the sequence more interesting for the public and operators. 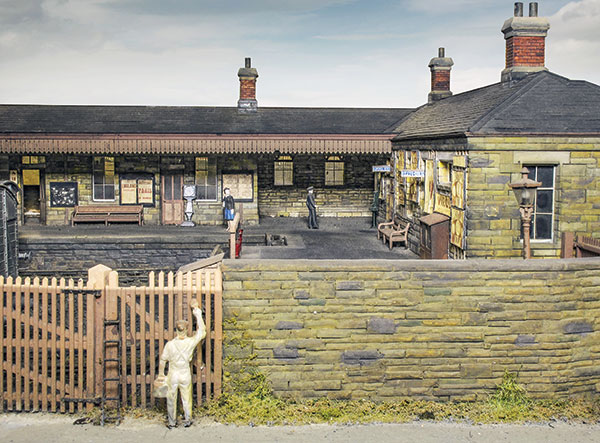 The layout was very well-built by pioneers of P4 modelling. Maintenance and repairs have been minimal, with the exception of the bracket signal where wear in the crank mechanism and the use of solenoids has become a problem. If doing it today we would use servos. When built, and from our experiences of the then current H&M point solenoids, a slow-action point motor was needed to reduce the amount of stress on the point blades and also moves realistically. This was achieved by a purpose-made mechanism incorporating a rotary motor based on a Tri-ang X04 motor and these are still in use. This would not be necessary today with Tortoises or Cobalts taking their place. Scenery is perhaps a little dated; bushes and trees being created out of foam cut up in a food blender (which promptly burnt out with the strain!) on either metal wire frames to create the trunks or wire wool for bushes that then rusted to dust. Grass was dyed lint glued face-down then ripped off, which gives a good long grass effect, but nowadays this would be mixed with static grass.

The layout has passed the test of time with flying colours. It has not escaped some serious traumas over its 40 years, not least of which was being deluged with water during a flash flood. Only the fiddle yard (the bottom sections when stored) was affected but this too survived with little remedial work.

The North London Group is still active and meets every month just off the North Circular in Hendon. New members and old friends are welcome. There are talks, film shows and modelling evenings with test tracks. However, we have suffered from our own success and several members have, or are building their own layouts at home and therefore have little time to build another large club layout.

To read more about Bodmin, see the April 2020 issue of BRM. Download today from www.pocketmags.com/BRM.