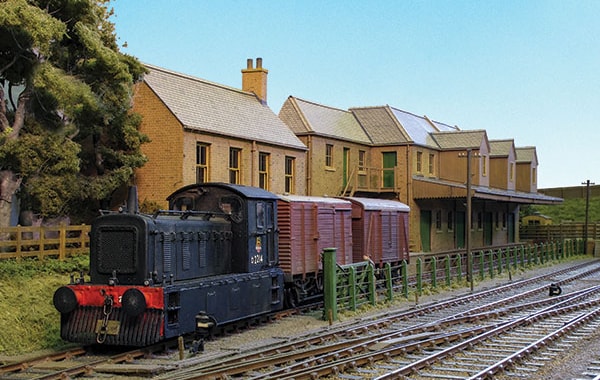 Paul Marshall-Potter admired a Chris Matthewman layout so much that he bought it. Here we learn about his stewardship and the light changes he has made.

Buying a second-hand layout can be difficult. If you’re wondering why the article starts with that sentence, it’s because this layout has been pre-loved. Bawdsey is an EM gauge layout built by the late Chris Matthewman, and I bought it from the family after he had sadly passed away. It was originally named ‘Strove’, and was set in the 1930s.

I’d seen the layout when Chris was exhibiting it, and it ticked all the boxes for me immediately. I’ve always liked East Anglian branch lines. Reinforced by many of Iain Rice’s books over the years, the layout has a regional design element that places it firmly in East Suffolk. Chris took Aldeburgh as his starting point and based the layout on that station. The station building, engine shed, and goods shed are all based upon the real Aldeburgh station, as is the overall track plan. The build quality of the whole layout is exceptional, the track is hand-built using K&S components, and the buildings are card construction, covered with Superquick brickpapers.

The layout had been built with old equipment – H&M solenoid point motors, for example, and very much in a typical 1960/70s style. This meant that I couldn’t go to model shop and expect to get a replacement component. If you’re buying a layout these are key considerations – the most important is how reliable it’ll be and the ability to fix any problems that may occur. Chris’ reputation as a builder whose layouts were of good quality made the purchasing choice relatively easy. 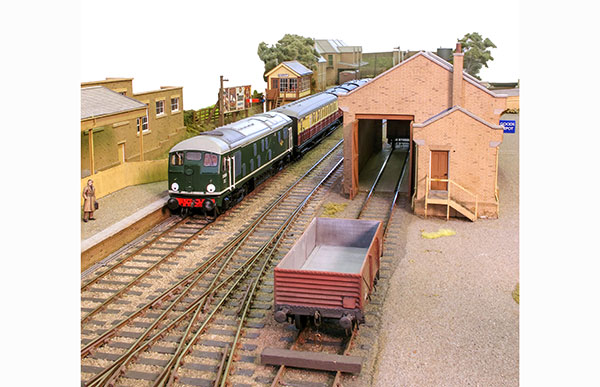 A Class 24 arrives with a hunt special. The train is formed of a Gresley Brake Third which the horse grooms and hunt staff would have travelled in with horseboxes behind. Hunt specials were quite common trains allowing various Hunts to travel to different areas of the country. The class 24 is a Bachmann model with Ultrascale EM wheel sets and Shawplan roof grills and laser-cut windows. As the era depicted has very early diesel traction, the locomotive stock has light weathering, as they would have been quite new into service and well cared for.

The design of the layout allows it to pack into a storage box roughly 4ft long and 2ft high. The legs are designed to pack tidily together, so the layout can be transported in a Ford Focus-sized car with room to spare. This also made the layout easy to store at home when not in use, which was another buying consideration.

My interest in terms of era is the 1950s into the 1960s, just prior to the Beeching report and subsequent cuts. Having an aviation background, I looked at the area Great Eastern lines through Norfolk and to south of Ipswich. During the war Orford Ness and Bawdsey, (south of Ipswich), were very secretive areas, both having played major parts in the development of Radar. I imagined that the original railway served Bawdsey and that the Quay, with its ‘ferry’ to the Felixstowe side of the River Deben, had in the past grown to a size that a Branch line to Bawdsey and the Quay could have been built. 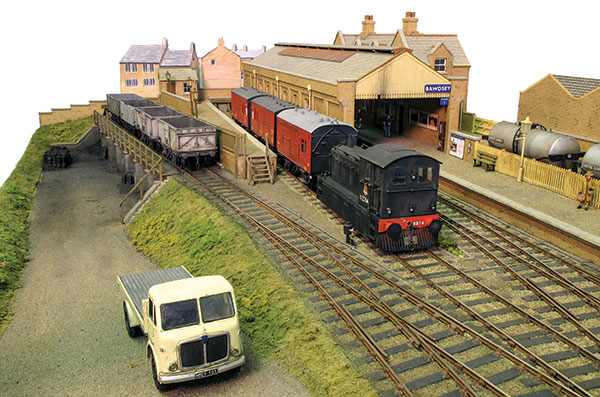 A Class 04 positions vans into the abattoir siding. All items in this image are either scratch-built or kit built. The track and buildings are all hand-built by Chris Matthewman the original builder of the layout, the Class 04 and vans are white metal and plastic kits respectively. Both the locomotive and wagons were good basic starter kits, which with care built into excellent models, and still stand the test of time today, as does the layout itself.

I set the layout in the period where the old traditions and working practices of grouping and pre-grouping companies are being absorbed into post 1948 British Railways. By this time the decline in traffic and modernisation changes would have signaled a grim outlook for the railway, and I wanted to show the railway just prior to those changes taking hold.

The layout came with LNER 1930s era signage, vehicles and figures. Relatively little changed in the 1940s, in terms of the infrastructure, so for the 1950s I’ve depicted the change to Eastern Region blue and removed the older looking figures and equipment, such as horse drawn vehicles. On the platform one of the porters has just dropped off the running in board and two BR totems to complete the signage change. The signal box is in early LNER colours, although by the 50s it should have been cream or white main panels with the framework in either green or black. I looked at changing this, but decided that it would be too difficult to effectively mask the layout, windows and panels to get a suitable finish. I did carefully remove the original signal box nameplates and replaced them with nameplates for Bawdsey. 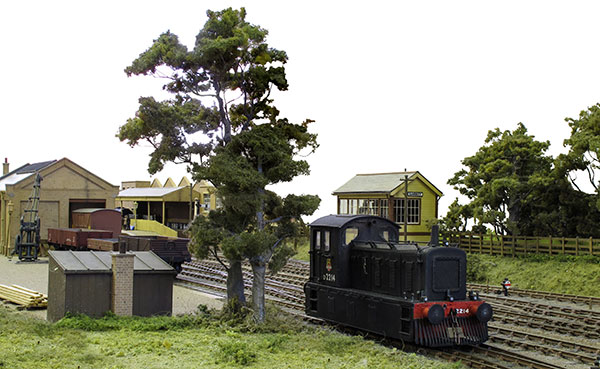 The diesel 04 shown here is a 1980s white metal Vulcan kit, depicted with side skirts for running on lines such as the Wisbech and Upwell lines. It was an excellent starter to kit building being a simple 0-6-0 model. Powered with a Portescap motor it is one of my favourite locomotives and one I cherish as ‘my first’.

I have been very fortunate with the rolling stock for the layout. The coach and wagon stock I already had in OO gauge. They were converted to EM gauge by either replacing wheel sets or re-gauging the existing sets. I’d previously worked in EM gauge, so there were no challenges there and the motive power comprises two Class 24s (Bachmann), two Class 15s (Heljan), one Class 08(Hornby) and a Vulcan Models whitemetal 04 kit. The Bachmann Class 24s have had quite a bit of work done to them. They were used as a prototype to develop the Shawplan laser-cut glazing for that model, (as was the Hornby Class 08), they also have had roof panels changed and new exhausts fitted, as the Bachmann roof is a compromise from Class 24 and class 25 details. The Heljan Class 15, like the Class 24, is particularly appropriate for an Ipswich area branch line. All these needed were the wheels changing, as the rest of the locomotive is excellent. Passenger operations are primarily Cravens Class 105 DMUs and a Derby lightweight unit. 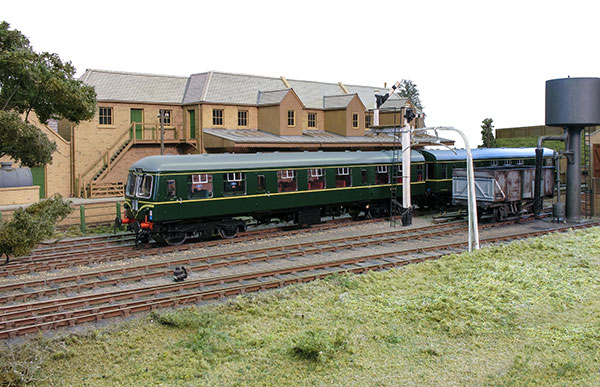 A Class 105 DMU arrives at Bawdsey. This type was seen in the era and region, I’ve been careful selecting items that enhance and enforce the era and location as far as practical. The model is by Bachmann with a Branchlines EM wheel conversion set. This would be a very quick and easy conversion to get someone started in this gauge.

The locomotives and rolling stock give the layout an immediate regional flavour of late-1950s early-1960s East Anglia. I adapted the original operating sequence for the layout, where each part of the track plan is used at least once in the sequence. It rotates through approximately twenty moves and returns the stock to original positions at the end. Some moves were now unrealistic; the influx of diesels in real life meant that local trains were now DMU-operated, rather than coach stock, and the sequence was adapted to reflect this prototypical efficiency improvement.

The layout has been sold to two of Chris’ original exhibition operating team. They’ve performed a similar exercise as me, in that they viewed and ran the layout, and checked it was as they remembered it. They are aware of the possible challenges of owning an older layout, and they have the experience to maintain it and, more importantly, look after it.

To read more about Bawdsey and get the article in full, see the January 2019 issue of BRM. Download today from www.pocketmags.com/BRM.