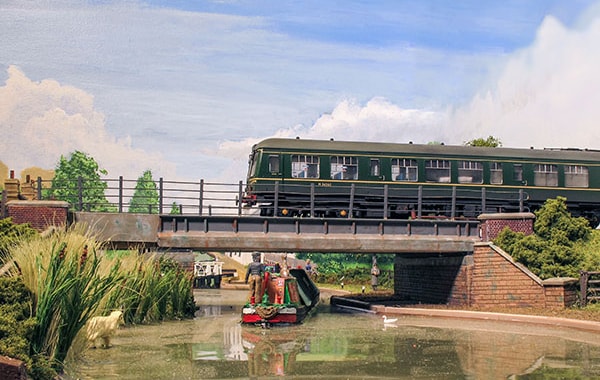 An historic trackplan of this station on the Varsity Line was adapted by David Court and Peter Ellis using modern technology to make this layout authentic, yet achievable.

Fenny Stratford is located just east of Bletchley and was part of the Varsity Line running between Oxford and Cambridge operated by the LMS. During the 1950s, the location had a double-track station, a number of sidings and a large active timber yard. During this period, the timetable was comprehensive, with a mixture of passenger and freight services. In the future, Fenny Stratford will again be part of the new East West Rail link. However, even this new plan will see Fenny Stratford remain single track.

I suggested to our model railway club that the location could be built as a club exhibition layout, but this was not possible due to lack of room. It was at that point that fellow club member, Peter Ellis and I, decided to build it in my garage.

Peter converted the 1946 trackplan into an AnyRail trackplan. We had to move the Grand Union Canal about 150 yards nearer the station; this was to keep the overall length of the layout within the restrictions set by the length of the garage. 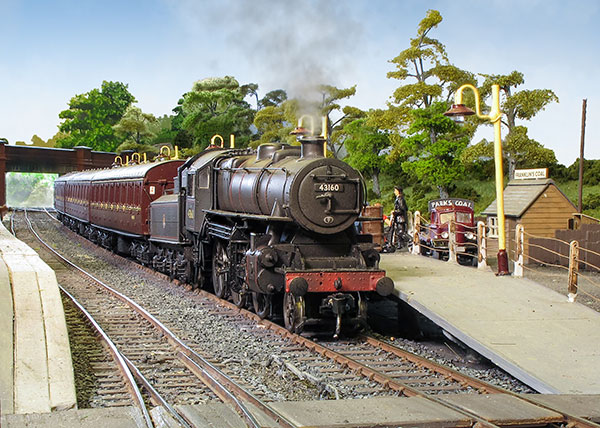 Once we had a detailed trackplan we could start work on the baseboards. For this, we turned to a friend at the club, Wayne Webb. He had built a number of baseboards for different layouts (including Brinklow, BRM February 2018 and Dentdale, BRM April 2014). He designed the individual boards and even cut all of the plywood pieces required. This, for me and Peter, was great as it was just like putting together a piece of Ikea furniture. The major benefit of these boards is that they are lightweight, but unbelievably strong.

The layout consists of five scenic boards. There is one at 120cm, two at 100cm and two at 90cm long, making a scenic length of 5m. The differing lengths are to avoid the points and some other buildings. 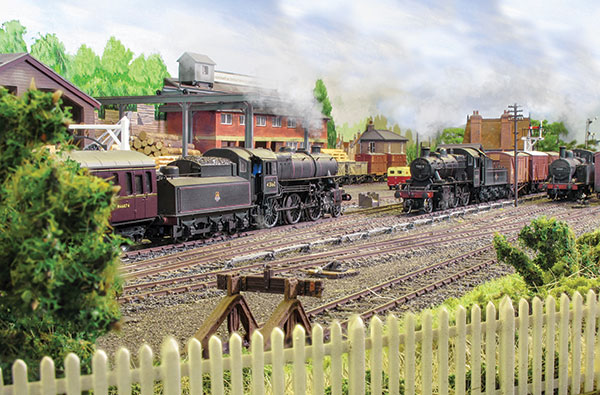 At each end of the layout there is an addition 120cm fiddle yard board. For the fiddle yard we have used a twin track cassette system with four cassettes at each end. These locate with brass rod and tubing, which also provides the electrical connection.

At the outset we decided that the layout would be DCC-controlled, have working signals and working level crossing gates.

Track is Peco Code 75 bullhead rail. All points are Peco Streamline and these have been extensively modified for DCC use and to improve their appearance. The result of this work was extremely pleasing. All of the points are operated using Cobalt Digital slow-action point motors. The signals are hand-built using kits from Wizard Models as the base. They are operated by mini digital servos controlled by a MegaPoint controller.

Once the track had been laid, the task of wiring the layout started. Each board was wired as a single unit, with a DCC bus, a 12V bus and wiring for signals and level crossing servos. The boards are connected using Tamiya connectors for the DCC bus and 12-pin 'D' connectors for everything else. Each board was individually-tested by connecting it to the master board. Once all of the boards were completed, the layout was connected and for the first time, trains ran on 'Fenny Stratford'. This was great as we could play trains for a while. 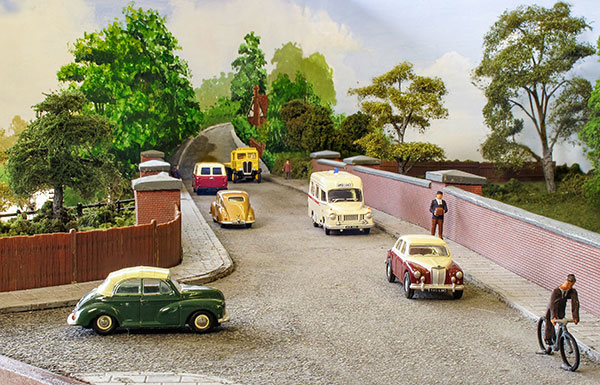 The layout is controlled using an NCE Powercab system. We decided very early on that we did not want to control the points using a mimic panel, so we decided to employ JMRI PanelPro and use the Routes functionality it provides. The actual operation of the layout is performed using wireless tablets, again connected using JMRI WiThrottle. These allow the operators freedom of movement and also easy access to the throttles and the routes. During our testing phase we refined the setup and we are now very happy with its operation.

The rolling stock is mainly from Bachmann with a scattering of Hornby items. We found on the Internet a copy of a timetable from the 1950s, which we could use to determine the rolling stock required. The majority of the movements use steam locomotives with a DMU serving the local passenger service.

We use a mixture of Mk. 1 corridor coaches as well as suburban coaches for the passenger services. In addition, there are a number of goods trains used to keep the interest going. 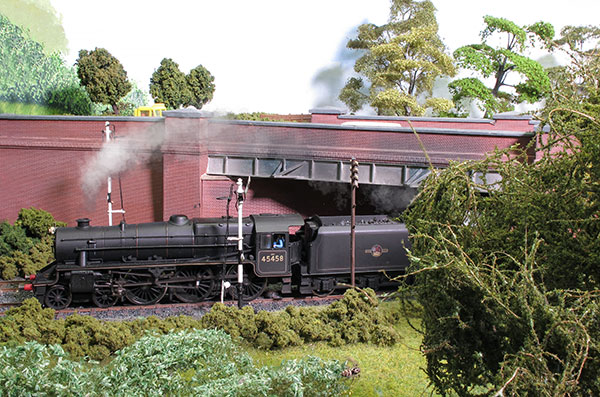 All of the buildings on the layout are a true representation as they were in the 1950s. Some of the buildings still exist today, such as the station building, police station and the canal cottages. For all of the others we had to find photographs on the Internet. These included the crossing keeper's house, signal box, Rowland's Timber Yard building and Rowland's house on Simpson Road.

Fortunately, Peter is a retired architect and was able to produce accurate plans that we could use to build them from. The station building has some very complex fittings, such as the bargeboards and the supports for the sidewalk cover. Once again Peter’s skill with his CAD system came to the rescue when he produced 3D drawings which we then had 3D-printed with excellent results. 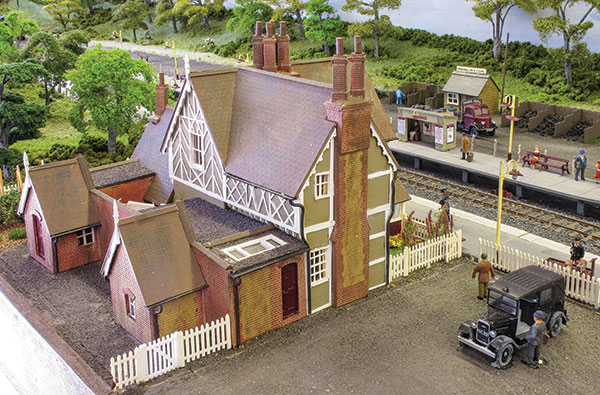 We have used a few kit buildings for such things as the coal office, platelayers’ huts and goods shed. All have been modified in some way to fit our requirements.

The lengthy process of bringing the layout to life was started by adding the scenery.

The first task was to replicate the ‘Stag Road’ bridge that carried the A5 road over the railway. Once this was in place, the remaining contours for the rest of the layout could be set out. The main embankments were constructed using the tried-and-tested method of lacing card strips over formers and then covering with paper, soaked in PVA glue. These were then covered with various Woodland Scenics scatters and static grass to build the look we wanted.

Simpson Road crosses the railway controlled by level crossing gates. The gates were constructed by modifying a Wills kit. These are operated by mini digital servos. After our first exhibition these gates needed to be strengthened as a couple of them came loose after being struck by a passing train on two occasions. The errant operators shall remain nameless. 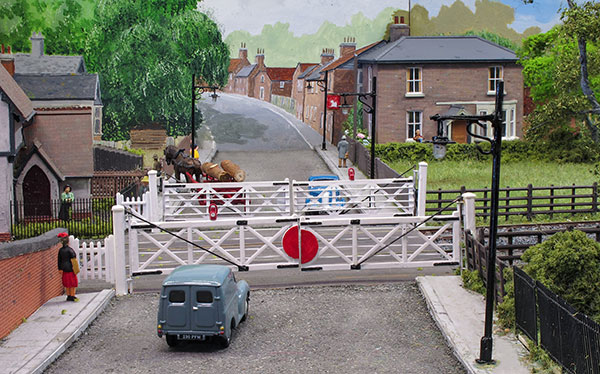 The Grand Union canal at Fenny Stratford includes a set of locks that have the smallest rise of any lock on the Grand Union Canal network of just 1ft. Unfortunately, we only have room for one of the sets of gates, but this one is an accurate representation of the real thing.

The canal was built using a plywood base that was sanded and then painted a mixed green colour, which was blended to give that canal colour. This was then covered with two coats of Deluxe Solid Water. A tip when using this product is to make sure all holes in the sides and base are filled, we missed a tiny pin hole which resulted in a puddle on my cabin carpet!

During work on the scenery, we began to realise that we needed in excess of 50 trees on the layout. We decided that we simply did not have enough hours to build these ourselves, so we subcontracted these to another of our friends at our model railway club, Jacqui who runs Ceynix. We are so glad we made this decision as the trees Jacqui produced for us are just brilliant.

The backscenes for the layout could not be obtained from any commercial source. To produce what we wanted it was decided that these would need to be hand-painted. Peter took on this challenge and produced them using acrylic paint. The perspective is just right, so you can look down the canal and see it disappear into the distance.

Peter and I are very pleased and proud with what we have achieved in terms of realism, interest and quality. Our biggest accolade was when one of my neighbours came to see the layout. She explained that as a child she would catch a train from Fenny Stratford to school in Bedford. In her words, it brought back many memories and was exactly as she remembered it.

We started work on the layout in September 2016. Our target was to complete the layout for the Milton Keynes Model Railway Society's 50th anniversary exhibition. This was to take place on February 16, 2019, which was to be the layout's first outing. We are pleased to say we made it.

To read more about Fenny Stratford, see the January 2020 issue of BRM. Download today from www.pocketmags.com/BRM.