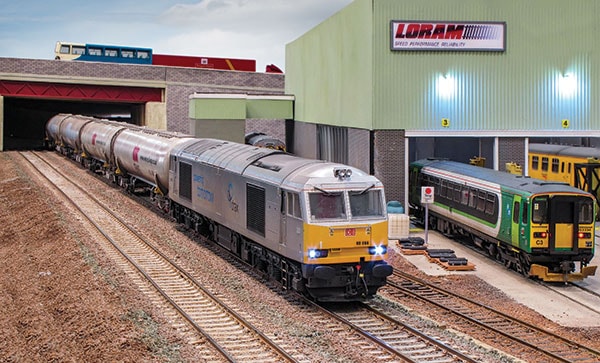 Famed for its research and development work on many of Britain’s rail icons, Derby’s Rail Technical Centre has taken a different direction, though its current modelling potential still appealed to Mick Bryan.

Take a stroll down Deadmans Lane in Derby and you will encounter a sign for the East Midlands Trains (EMT) Etches Park depot. Should you be lucky enough to be admitted, you will see the multiple colours of white, orange, red and blue. However, if you turn your attention to the left, gazing across the Derby to Long Eaton main line, the dominant tone is yellow…

In view is the site of the former British Rail Research and Technical Centre (RTC), now mostly occupied by Loram, who maintain the Infrastructure Monitoring (IM) test fleet on behalf of Network Rail.

While exhibiting 'New Bryford' at Derby in 2013, I was lucky enough to be given a short tour of the RTC site and Deadmans Lane,  the seed was sown for a new layout. 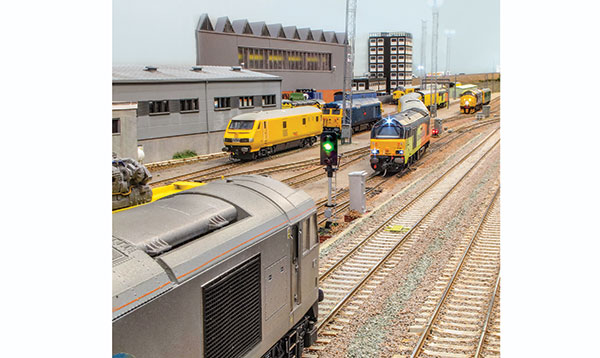 Then research really began. Google Earth was used as a starting point to determine the extent of the site and also the basic track layout by zooming in on satellite images. Further photographic research through the likes of Flickr aided in the finer detail of the trackplan. As with many prototype locations, the space required was quite large but, by careful compression, I could still represent the RTC site and its principal structures. The main compromises were shortening of the buildings and reducing the number and length of the sidings.

About the same time, I was considering how the layout would be run. The initial idea was the main RTC site as centre-stage and the passing Derby-Long Eaton line as an end-to-end shuttle, with East Midlands Trains DMUs and Cross Country Class 220 or 221 Voyagers as the largest item of rolling stock to pass by. 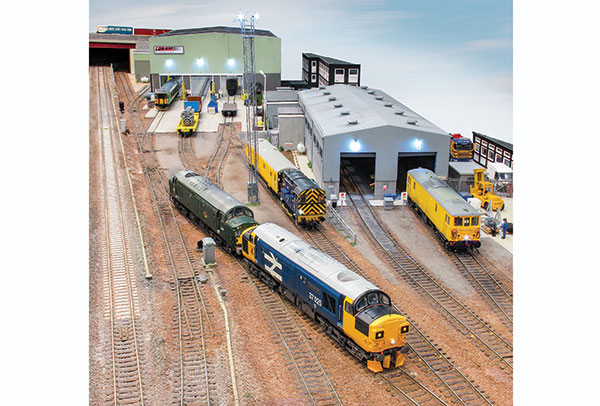 Construction of the baseboards commenced in early 2014 with the first tracks being laid a couple of months later. All trackwork is Peco Code 75 with large radius points, except for the two double slips across the centre of the layout.

The first four scenic area boards are conventional plywood and careful consideration was given to the design of the ends. This was because previous layouts that I had been involved with had been weak in this area leading to long-term problems with track alignment across the joints. A double skin approach was used to aid long-term stability and so far this has proved to be quite resilient.

However, it wasn’t too long before the lure of larger trains and a continuous run was decided upon. One reason for not initially considering this approach was the cost of building a multi-road storage yard but, with careful thought, the investment in a fiddle yard that could easily be used for future layout plans would pay dividends. In conjunction with Tim of Tim Horn Baseboards, curved boards were designed to suit – 1ft wide with an inner radius of 3ft would give an approximate operating space just over 4ft wide. 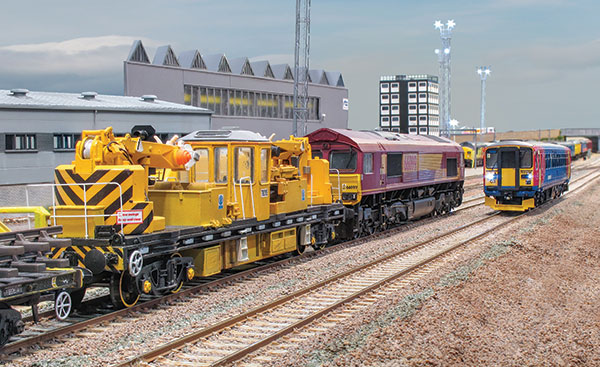 These were duly purchased as flat pack kits, along with four other 4ft by 2ft boards and a 12-road yard was laid in the main straight section, with the curved boards making up the full circuit.

At 24ft overall, the layout cannot be assembled at home – I could only assemble two boards at a time and sometimes three, but luckily my wife’s workplace has a couple of large rooms available, and a few days were reserved for a test build to prove it all fitted together and worked. I had been very careful with the wiring of the layout, testing each stage as much as possible and this paid off, it all worked first time when assembled as a complete layout.

When the layout was fully-assembled for the first test, it was quickly realised that the scenic section didn’t have enough depth to it and an extra 5in wide section was screwed onto the existing boards before constructing the scenery. 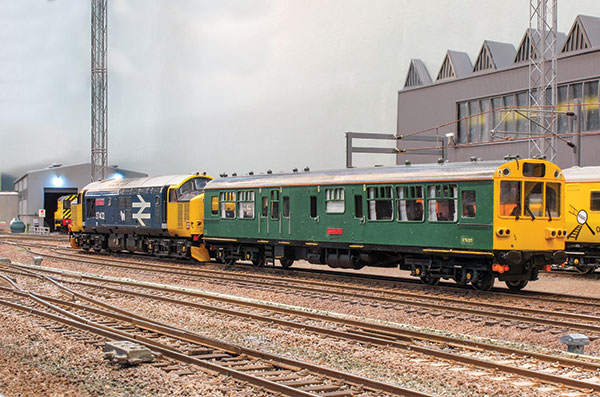 One of the main hurdles to be cleared in the construction of the layout buildings and detailing was suitable trackside and detail information, as most recent available photographs were taken from passing trains. I even passed the site a couple of times in a train with the camera shutter on repeat! However, thanks to Alex Hall at Mickelover MRS, contact was made with RVEL, the then major occupants of the site, and I was given a guided tour by Andy Beaumont and permission to take as many photographs as I wanted for personal/layout research. This visit enabled a few extra details to be included, with some more still to be added.

The backdrop buildings such as Trent House and Brunel House were always going to prove a challenge. They were recently renovated with uPVC panels and have a uniformity about them that was likely to cause me headaches cutting out a few hundred rectangles. After reading a thread on RMweb, a Silhouette Portrait Cutter appeared to be the solution to retaining my sanity! It looks like a hot laminating machine, but has a small blade and cutting table that can quite happily cut 0.010in styrene sheet or score 0.020in ready for cutting out with a sharp blade. This, and similar machines, are primarily used in home greetings card creation, but have seen increased use in the modelling hobby to create intricate cuttings. 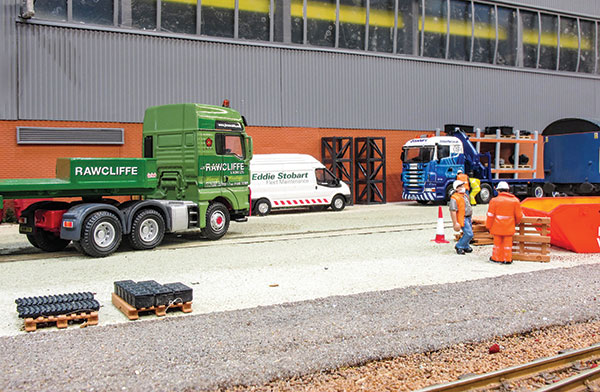 Free software supplied with the Silhouette enabled a large number of uniformly spaced rectangles to be drawn and then cut out in a matter of minutes. The large office blocks consist of three layers of styrene, laminated together on a carcass of 3mm foamboard. One tip from the above mentioned thread suggested the use of Limonene or Orange Turpene as a solvent for laminating the various sheets together. They are by-products of citrus fruits and less aggressive than the more usual MEK or Butanone solvents. The laminates were laid over each other and solvent carefully applied to the seams. Then, they were laid on a sheet of glass with another sheet over the top, gently weighted down and left overnight. Some of the building sides have four layers – each added separately. So far, the results have been very successful.

Apart from the office blocks, the large Engineering Development Unit or EDU building is laser-cut MDF shell with Evergreen cladding. The former Advanced Projects Laboratory – now known as the Vehicles Workshop, is made from the Wills Modern series, and the large Kelvin Workshop is a foamboard shell with Wills and Evergreen cladding. The Silhouette cutter has been used to create various window frames for the above structures. The long Track Laboratory is Evergreen sheeting.

Most of the other details are readily-available proprietary items, and I’m always on the lookout for new items via the likes of eBay, and the suppliers providing laser-cut, resin cast and 3-D printed items. The short overhead line calibration section has been built using Peco catenary parts. 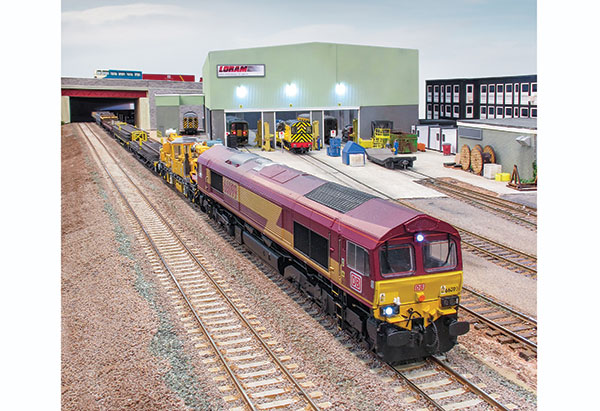 One of the original aims behind ‘Deadmans Lane' was not to be just another DCC-controlled diesel depot as the RTC site welcomes a large variety of locomotives and liveries, as well as the unique test vehicle fleet. Although I’ve already created the majority of the test vehicles, there is more still to be done. There are regular visitors including the likes of Great Western 57/6s and Direct Rail Services 37s for heavy overhaul work to add to the variety. Some licence has been taken with the passing trains, as these have been modelled upon those that run nearby in the Stenson/Trent Junction/Derby environs.

With any layout based on contemporary practices, there are always changes to be done and rolling stock to be updated to maintain interest.

It was always anticipated that 'Deadmans Lane' would be DCC-controlled for both trains and point control, so the main scenic section is wired as two bus systems.

Past experience of DCC-operated layouts, particularly with regard to sound, led me to separate the track wiring into power districts, each protected by their own circuit breaker, so if a short occurred in one area (usually by accidental run-through on pointwork), it would not trip out the main DCC system and lead to an eerie silence followed by the simultaneous startup of all the sound fleet.

The track bus is split into four sections, each fed with a DCC Specialities PSX unit. These power the RTC yard, the main line across the front and then the inner and outer halves of the storage yard.

By using DCC in this way, it's a little bit more than the oft-championed 'just two wires'. For example, there are four pairs of wires that traverse the front of the layout, two pairs for DCC power zones, one pair for accessory control and a final pair with a 12V DC feed for other items such as building lights.

The scenic area pointwork is fitted with Tortoise slow-action point motors driven by ESU Switchpilots, originally purchased for another project which wasn’t started. I wanted a 'mimic' style arrangement for my operators with the points switched by simply selecting them on a diagram and was considering the use of computer control with a tablet or similar when I discovered the then newly-launched DCCconcepts Alpha System. This uses a DCC encoder to create the digital signals to control the ESU Switchpilots via a DCC accessory driver, known as a 'Sniffer'.

The resulting control panel has a two-wire power supply in and two wires back out to control the pointwork – no requirement for large multi-way plugs and sockets.

As already explained, the storage yard was built a few months later. This is a simple 'ladder' type yard, with six loops each way. Initially, it was intended to use Peco point motors and diode matrix route setting as, at the time, DCCconcepts did not offer a route setting system for the Alpha System, but then along came the Megapoints servo systems. A quick chat with David Fenton, and a route setting system was purchased. A single routing board has the capability for 24 routes – perfect for independent control of 12 loops from either end. The result is a self-contained 16ft-long storage yard that simply needs DCC track power and 12V DC for the Megapoints system.

There are a few other points on the layout, four controlled by Cobalt Digital iP via the main Alpha panel and six that are manually controlled as they form part of the emergency crossovers that are only used when swapping stock across the two main running circuits.

To read more about Deadmans Lane, see the June 2019 issue of BRM. Download today from www.pocketmags.com/BRM.