Botleigh Old North Road is an imaginary steam shed and diesel depot in an urban setting on the Southern Region, set in the final months of steam traction in the mid-1960s. 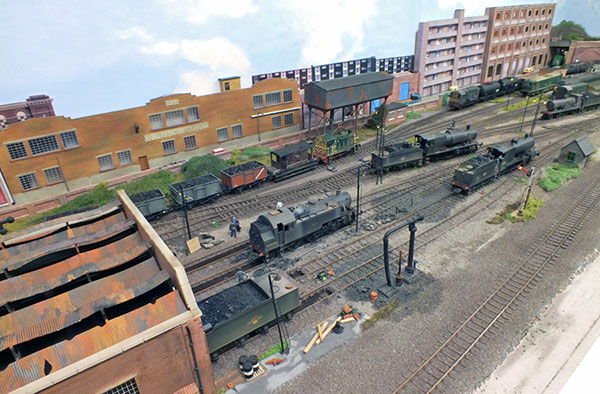 Botleigh Old North Road is an imaginary locomotive shed based in the Southern Region, set outside a large station. It is squeezed between a main line, recently singled to one track and ‘Penny Lane’ featuring a mixture of old shops, terraced houses, factories and new flats - a scene typical of city life in the 1960s.

Construction
Ian Corps used track from SMP, with Code 65 phosphor bronze rail with scratch-built points. He felt that this type of rail gives a realistic rusty look to track from the ‘box’. Track was laid on cork sheeting and ballasted using N gauge granite ballast. In the immediate shed area Ian used barbeque ash and fine coal dust. The turntable is from Peco but had been substantially modified to fit a hand cranked mechanism using meccano gears and a worm. It was originally motorised but he wasn't satisfied with the track alignment, so reverted to hand operation which gives more precise operation. 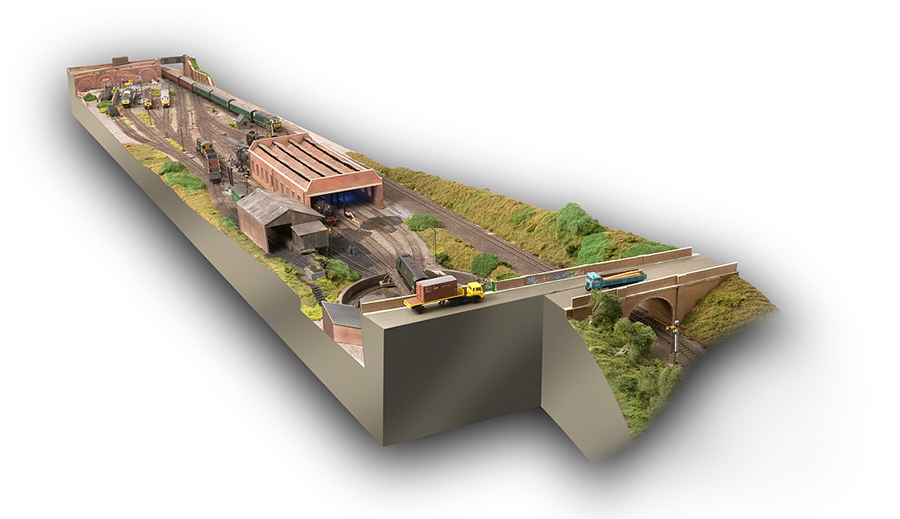 Framed between two styles of road bridges, the 12ft length of Botleigh North Old Shed provides sufficient room for storage and operation of more than 20 locomotives on shed if desired.

Buildings
Some will recognise the shed as an enlarged version of Templecombe shed on the S&D. This can hold up to 16 locomotives. The coaling stage is based on the corrugated iron structure at Norwood and the signal box is modelled on Liphook. The buildings use the same construction technique of Plastikard mounted on thick cardboard for mounting pictures. The water tower is two Airfix kits joined together, but the bulky plastic cross-bracing has been replaced with soldered copper wire preformed on a jig.
The arches that form the scenic break at each end are from Scalescene products, mounted on card. He found at his expense that its worth using quality ink when printing because cheaper ink fades quickly in sunlight.

Botleigh North Old Shed's backscene was painted by his neighbour who is a talented artist. The low-relief buildings are from the Scalescene series. He also took photographs of suitable local buildings and printed them on quality photographic paper, then glued them to the backscene behind the low relief buildings to give depth of field. To add atmosphere Ian created a scrap yard underneath the arches. He felt it's an ideal way of putting to use the odds and ends that modellers collect. The vehicles in the yard are from the Oxford Diecast range and have been suitably distressed with a large hammer. On a layout like this there is little conventional scenery. Where it exists, rough grass was created using airbrushed felt carpet underlay. No locomotive shed would be complete without puddles of oily water, created using multiple layers of clear varnish.

The new guard: Bo-Bo electro diesel E6007, Brush Type 4 D1942 and an unidentified 350hp 0-6-0 diesel shunter. A newly-trained diesel driver poses for camera in his much cleaner overalls now that his steam days are over.

Figures and detail
The figure population uses a mixture of Dart Castings, Langley Miniture Models and Aiden Cambell. Figures of policemen, a burglar and shoppers give additional interest to the back scene. The Ford Anglia police car a working flashing blue light, using a 1.8mm blue LED connected to an electronic flashing circuit. Yard lamps are built using brass tubing and ladders. For the diesel depot he used ultra-bright white LEDS, whilst in the steam shed he used yellow LEDS for a more subdued glow. The shed is illuminated using surface mounted LEDs.

Control
Ian has opted for conventional control, with home-built hand controllers. The circuit design is now over thirty years old but gives good control at slow speed. Tortoise point motors are operated using 16 V half wave AC, to give a realistic slow action. The control panel has a mimic diagram of the trackplan and each point has a Double Pole Double Throw (DPDT) switch. The switch also controls Bi-coloured LEDs which indicate the position of each point by changing colour from red to green.

Fiddle yard
Ian opted for a cassette system within the fiddle yard, using L-shaped aluminium screwed to strips of MDF. This has the benefit of minimising the handling of locomotives as they can be stored on the cassette until needed.

Locomotives and stock
The stock is relatively limited, consisting of coal wagons supplying the coaling stage and oil tankers for the diesel depot. To add variety, Ian scratch-built a bogie brake tender, as used by some first generation diesels to supplement their braking efficiency on unfitted goods trains. They're suitable for the period. Locomotives are predominantly of Southern Region origin, with most standard classes represented and frequent visitors from the GWR and S&D. All diesels would have been seen on SR metals including Class 33, 35, 42, 47 and 08s. The majority of locomotives have been professionally weathered by Lord and Butler of Cardiff. 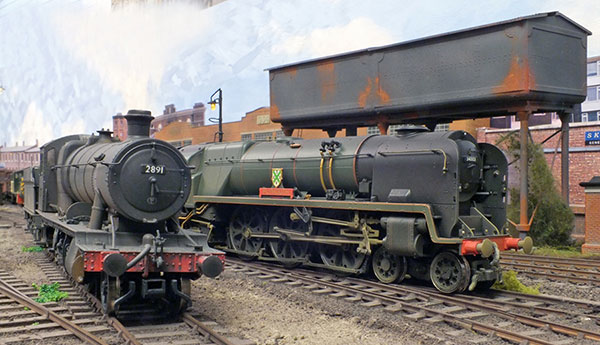 Botleigh Old North Road was built by Ian Corps after a house move allowed him to extend his existing layout into a continuous run. It serves two purposes: to allow him to find a home for his locomotive collection and to be an exhibition layout with the addition of two fiddle yards at each end. Why display your collection in a framed case when you can build a Motive Power Depot with the benefit of running them too?