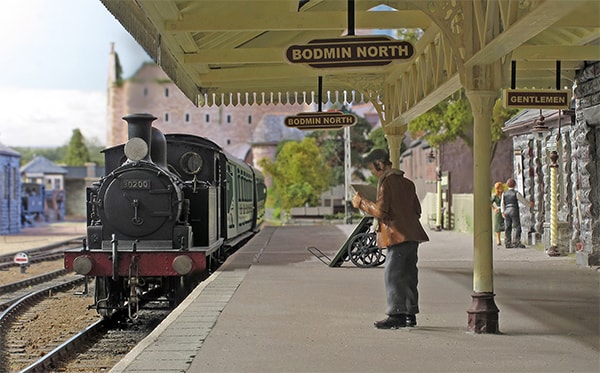 A quiet branch line terminus set in the 1950s, 'Bodmin North' is a beautifully-modelled layout and recalls the 'withered arm' in 7mm:1ft scale.

Fast forward to the early-1970s and I had modelled in OO gauge for years and was constructing a layout in a workshop I had built at our fi rst house. As the family grew, less and less time was spent on the layout, and a house move saw the layout dismantled and sold. I kept my interest in railways alive but drifted away from the hobby until 2004 when I bought a model railway magazine, just to see what was happening in the modelling world. In the back pages was an advert for a Beattie 2-4-0WT in 7mm scale. 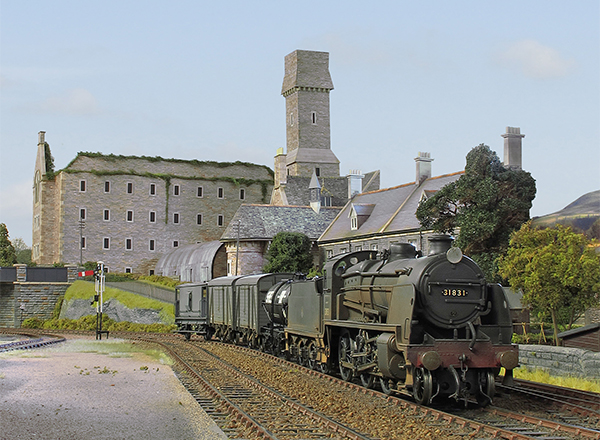 A friend had gone over to O gauge years before and I had always been impressed by the size and detail. A purchase was made and I was back to the hobby and researching the time when I was a boy! As I built up my collection,  thoughts of building another layout started to take hold, inspired by a couple of layouts I had seen in BRM – ‘Harlyn Road’ and ‘Rother Bridge’, based on the North Cornwall and North Devon lines.

My initial thoughts were of the Beatties’ home, Wadebridge. I started to build Wadebridge shed, for which I had a set of plans. After constructing the shell of the shed and the water tower it was obvious that, if I was going to build my choice of station, I would need  more space than I had available. Looking back to where the railway started in the 1800s, The Wadebridge & Bodmin railway was ideal, and ‘Bodmin North’ was born. With a good station layout and a station building in local stone (a similar construction to that of Wadebridge), sidings, a goods shed and a bit of modellers licence, my North Cornwall locomotives would all look at very much at home. 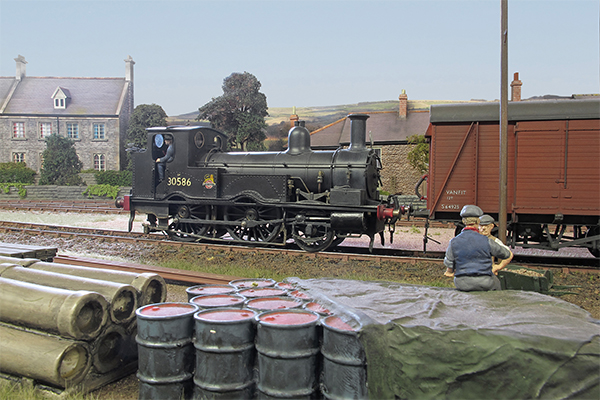 Two events really inspired me to move my ideas forward; firstly, joining the Gauge O Guild, which opened up a world of suppliers, articles, reviews and layouts built by members. More importantly, it showed me where my local club was, so I went along to Coventry & Warwickshire Gauge O modellers (COVGOG). 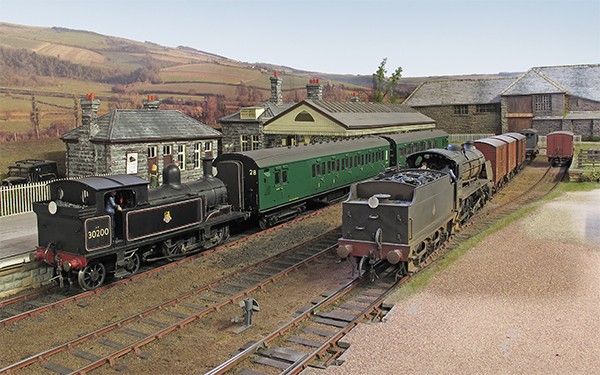 Trackwork for all the hidden sidings is Peco, but the rest is constructed from C&L components. The width of the workshop was chosen so that 6ft radius curves could be accommodated on the main boards and 5ft 6in curving through Dunmere and the station approach. The trackplan for the station had to be adapted to fit into the space; from the goods shed through the station up to the buffer stops in front of the original warehouses of the old Bodmin site is as per the prototype with one exception. I omitted a siding to the left of the running line which ended in front of the cottages and served the gasworks. The most significant modification was by the signalbox where the approach had to be adapted, and three sidings to the left of the ‘box had to be omitted. 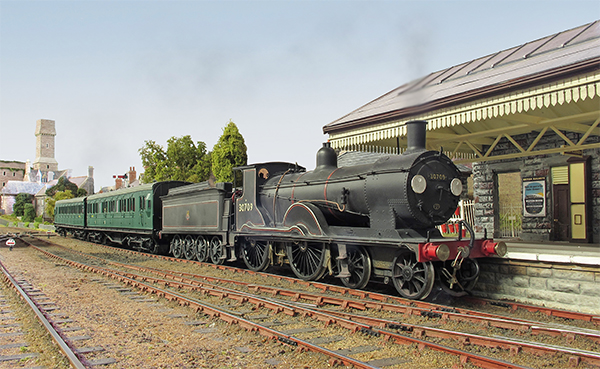 If you have never been to your local club give it a visit. Over the years I have made some good friends and the amount of knowledge amongst the members is second to none. My locomotive, coach and wagon building skills would not be at the level they are now if I had not joined the club, and I would never have thought I could assemble my own track before I joined. In 2008 an 18ft x 14ft shed – or workshop as the supplier called it – was erected, ply-lined and insulated.

Once power was installed I was ready to go. By this stage, I had collected a lot of information on the Bodmin & Wadebridge Railway and Bodmin North station itself. I also managed to obtain drawings for the station buildings, goods shed and signal box, from the South Western Circle (www.lswr.org). My plan was to build the branch as authentically; I wanted Bodmin to be as close to how it was in the mid-1950s as possible. I also wanted to be able to allow for continuous running, so baseboards were constructed all around the workshop with five loops for use as storage. The boards for Bodmin would sit above these; on the opposite side would be Boscarne Junction - in fact, a combination of Boscarne and Dunmere Junctions. The branch line would climb up from the junction at 1-in-40 (close to the prototype) through Dunmere Halt and on to Bodmin. 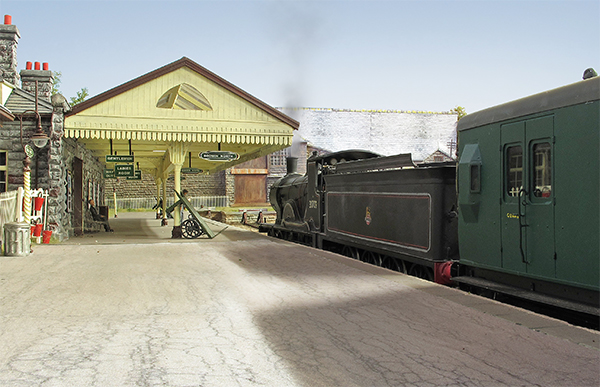 I really enjoyed building the scenery for the layout. It is incredible how this area has developed in recent years compared to when I last built a layout. The backscene is always a big part of bringing a model to life; I used a mixture of photographic landscapes from International Models and Gaugemaster. When you have planned the scenic section you are working on, put the backscene up first and work in front of it – it’s a devil to try and get it in place when everything is nearly finished!

Trees are a mixture of plastic armatures with thin poly fibre netting over the branches and teased out foliage on top to give it an almost see-through effect of the real thing. I have also produced trees from off-cuts of real trees and bushes from the garden. These form the trunk and main branches, to which I attach sea moss to form smaller braches and foliage. I then spray the sea moss with a matt brown colour, cover it with hair spray and shake light green flock all over it. The result is a good looking tree.

Next time you’re doing any pruning take a look and you’ll see what I mean. For large areas of grass I use teddy bear fur as a base then douse areas with hairspray and give it a light coating of static grass. I even had a lesson from Pete Waterman in burning teddy bear fur when our club visited his ‘Leamington Spa’ layout last year, and it really does work. If you are thinking of using teddy bear fur, ask your local supplier for wolf fur and for around £25 you will have enough for a fur coat! Hedges, bushes and saplings are a mixture of rubberised horse hair and sea moss. 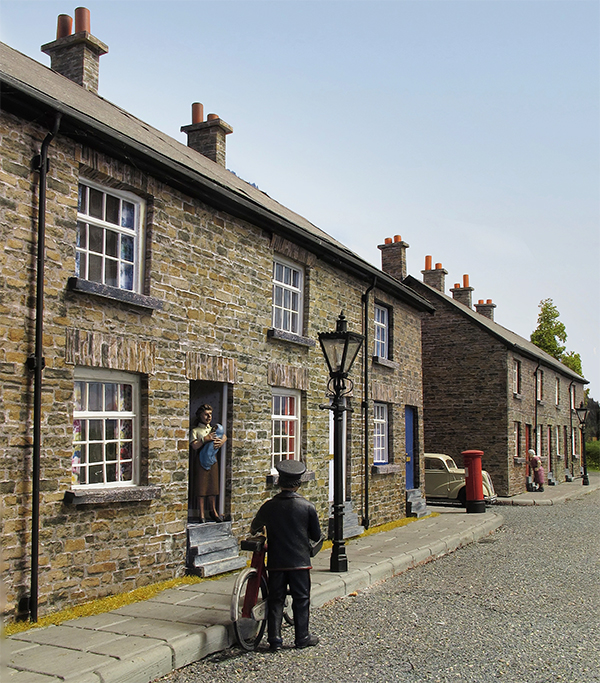 As hard as I try to construct buildings, they always look like cardboard boxes. Good buildings and backscenes really bring a layout to life and I had been impressed by models built by Peter Smith of Kirtley Model Buildings at Gauge O Guild events. After speaking to him and exchanging plans and photographs of the prototype, Peter built the station buildings, goods shed, low relief warehouses and the signal box. I always had in mind that I would like a representation of the gaol (the old county prison) as it is seen in many photographs of the original station, and even today when you stand at the site of the old station it is always a presence. It played a part in the railway’s history too; in 1838 around 2,000 passengers travelled by train to watch public hangings at the jail. Fortunately, all the cottages shown on the layout still survive today so photographs were easily obtained. Peter built the rest of the buildings for me over a number of years including the gaol (pictured), at the time it was the largest structure he had built. 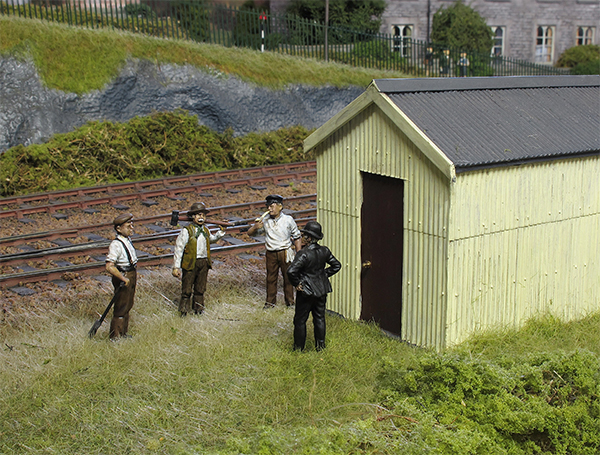 I still need to finish off some detail around Bodmin, namely the point rodding (which I should have planned better), and a lattice signal to replace the rail-built one. Dunmere Halt is complete with platform pagoda shelter, lamps, a path up to the main road and all the scenery behind it. Dunmere is in a cutting and the embankment opposite the halt is still under construction. On top of it will sit the ‘Borough Arms’ pub, next to the road from Bodmin to Dunmere. At Boscarne Junction, all the trackwork is complete and ballasted. With the branch line rising up at the rear of the sidings, it is my intention to box in the branch line, and have it re-appearing just before it enters the cutting at Dunmere Halt. There is still lots to do!

Locomotives on the layout are kit-built by myself and all appeared in Cornwall or Devon with the exception of a Maunsell ‘Schools’ 4-4-0 and a G16 4-8-0T. The fleet numbers a dozen in all, but my current challenge is an unrebuilt ‘West Country’ 4-6-2 – No. 34016 Bodmin of course! The original made a rare visit to Bodmin in August 1946 for its naming ceremony – how’s that for a bit of modellers licence! Coach and wagon stock was also constructed by me, with a few exceptions. I need to thank a few people for getting me this far; to Peter for the great job he did with the buildings, Howard for constructing the tandem pointwork needed at Boscarne, Paul and Mike for their continued support and encouragement. A big thank you also to John Wilkinson who has been a great sounding board and inspiration for my ideas for the layout and for all the help with locomotive construction. He has an eye for detail that is second to none. Finally thanks to Andy York for the excellent photographs.