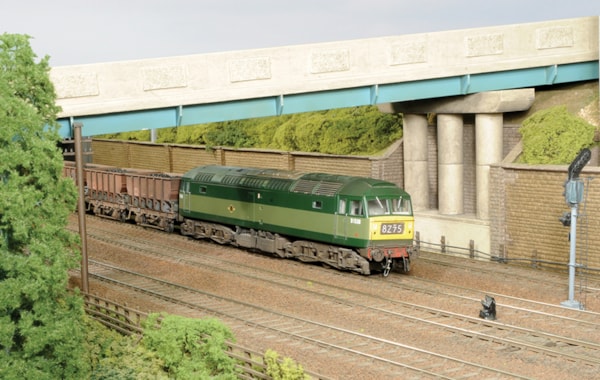 Apethorn Junction is a substantial O gauge model railway layout which features a multi-platformed junction station as its principal feature. The layout is DCC operated and all locomotive have sound. 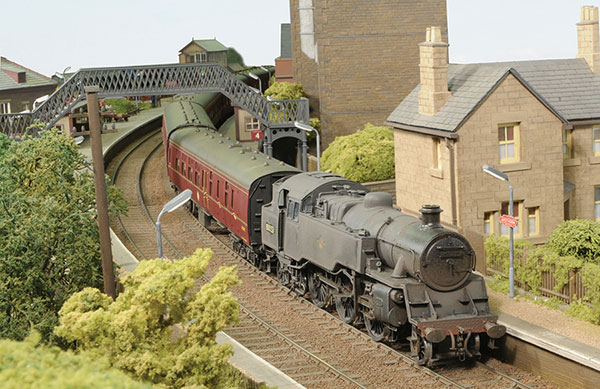 BR Standard Class 4 2-6-4T No. 80053 rounds the curve on Apethorn Junction with a local passenger.

Keith Harrison wasn't an O Gauge modeller, but in May 2006 he came across a layout called Oldham King Street. It was a small layout measuring 8ft by 1ft and was operated in DCC which he hadn't thought of using before. Chatting to the owner, David Hampson, for most of the day, he found out as much as he could. He had previously thought of O Gauge, but having to make everything from scratch was a little off putting. Whilst talking to David, he noticed that he had enough stock for about five layouts and he had nothing.

David was more interested in building locomotives and stock, whereas Keith was the complete opposite. David would make a proposal that he would build a layout to accommodate his stock and he would wire it in DCC. Apethorn junction and other project plans were drawn up late 2006 and shown to David who said he had seen something similar in a Fox Line book called, Oldham Loop No.1. The location was Royton junction so the book was used for reference in the building of the layout. 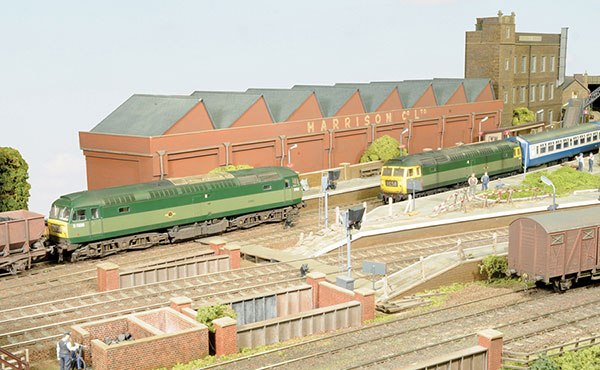 A pair of Brush Type 4s cross paths on different services. The Heljan model, left is hauling a rake of hoppers built from M&M models kits, whilst the one to the right, also in two-tone green departs from the platform with a BR blue rake of Mk. 2 coaches.

Next they would need an exhibition, (you can't beat having a deadline), so he asked the organisers of Manchester if they could exhibit at their 2008 show. Yes, was their reply, What do you have? He explained he had nothing but it would be a 1970's British Railway Diesel layout measuring 50ft by 16ft. So with their very hesitant consent he said he would keep them up to date with its progress so as not to worry about a great big hole in their show.

So now the start date would be Christmas 2006 and to be completed by October 2008 ready for the December show. Only the scenic boards would be assembled at this moment in time, ten in all. The fiddle yard and the reverse loop boards wouldn't be needed for some while. 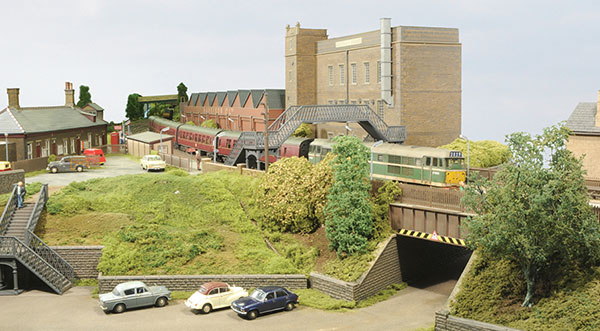 Brush Type 2 D1413 passes under the footbridge with its rake of BR maroon Mk. 1 coaches. Subtle weathering of the layout and stock add to its realism.

The making of Apethorn Junction 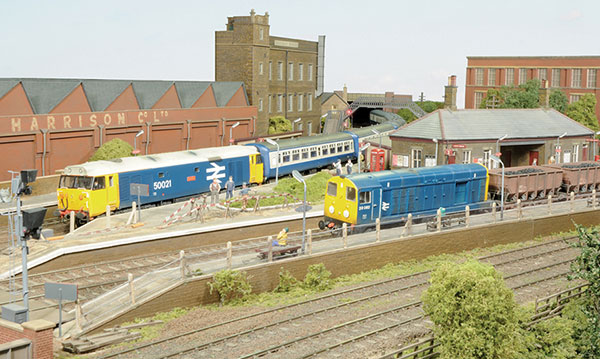 Turning the clocks forward to the 1980s, 50021 in BR large logo blue livery idles in the platform with a rake of empty stock. Adjacent, awaiting the signal is 20082 on a coal train.

Keith could do the basic wiring because with DCC there are only two wires which run through each board called 'bus wires'. They can be called A and B or 1 and 2 but not negative and positive because this isn't the case with DCC. Every piece of track is connected to the bus wire so you'll end up with the entire track live and not a switch in sight. Keith could now remove some of the 9mm ply as required and sculpt the polystyrene. It's possible to reduce it down to the 18mm MDF base. Once satisfied with the contours, all the exposed polystyrene was painted the same dark brown as the track bed.

Cutting the polystyrene can be a messy job depending on how you choose to remove it, Keith used a straight chef's knife.

A good thing with DCC is that each board can be wired individually and programmed with no need to have them together. As well the bus wire, there is a phone line that passes through every board so there can be a plug-in socket for the hand controller where operators are situated.

The retaining walls, tunnel mouths, platforms and bridges would need to be in place - not completed, but there so the ballasting could be done. Keith used a mixture of dark brown, fine and medium, ballast from Woodland Scenics. Once glued in position, it would only need a dust over with the spray having already coloured the rails and sleepers earlier. 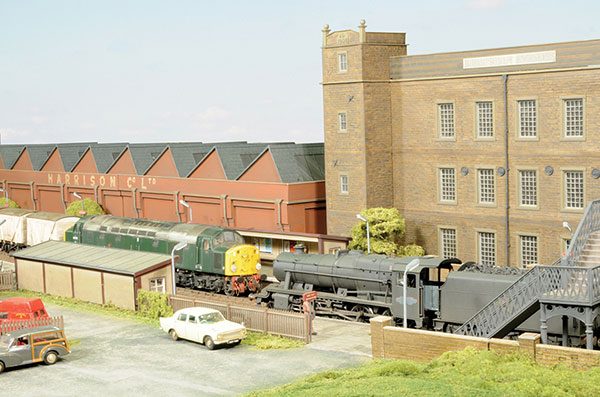 Changing of the guard. An unidentified BR 8f passes the future of freight haulage - a 1-Co-Co-1 Class 40 diesel locomotive.

Keith did all the work on the layout in his garage where he could manage three boards together at any one time - musical boards! He didn't notice the boards getting heavier because he was moving them so frequently. Weight is quite an issue with a large layout, so keep a check on what you're going to transport it with. The bathroom scales come in handy! For the construction of the platforms which are located on a curve, Keith made individual tiles measuring 21mm x 14mm to replicate 3ft x 2ft flag stones and made 2500 of them on holiday! Each one was beveled, stuck down and grouted, painted individual colours and weathered. The station building is of the one at Royton junction on the Oldham Loop. 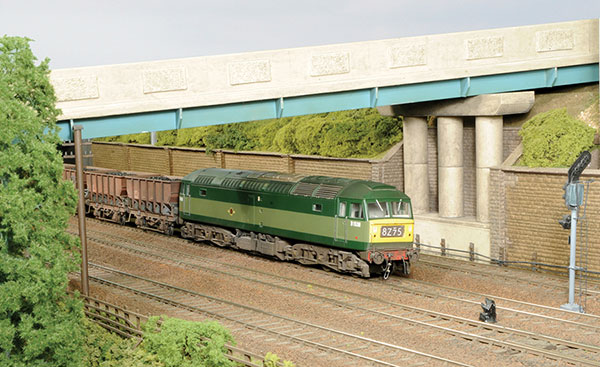 Before the introduction of HEA hoppers, 24.5T hopper wagons were a common sight on the railways, as seen being hauled by this Heljan Brush Type 4 locomotive.

Manchester exhibition arrived, but was Keith ready? He thought he was, but descirbed it as the 'weekend from hell'. No time to eat or drink and they couldn't talk to anybody or they'd lose concentration. He'd created a monster! His thoughts were that his new friends, 'the Guys', would be saying 'Thanks, but no thanks!' but they've had the same crew since that first exhibition.

A mill has since been added which sits in the triangle behind the station. It has been made so that it folds flat for transporting and it stands on its own legs so is useful for other projects. Keith's stock list was nil, but not anymore; David has built some of his locomotives and fitted them with ESU chips from South West Digital. Ken Ball built the station building and signal box.

Don't underestimate the amount of work an exhibition layout requires, especially with a looming show deadline. It's important you leave enough time for testing because exhibition visitors will expect your layout to work well. Building Apethorn is testament to the team's hard work and the layout can still be seen at shows.