This former station on the main line from Bristol to Birmingham sits adjacent to a site famed for brewing golden ales. Researching its history culminated in Farnham and District Model Railway Club's fabulous recreation.

Perhaps the most common question we get at shows is “Is it a real place?” It is! Wickwar is a station on the secondary main line from Bristol to Birmingham, just north of Bristol Parkway, and though the station closed in 1965, the line is still busy. The railway was built as broad gauge in 1844 by an independent company under the guidance of Brunel. The GWR intended buying it, but the Midland offered more, so in 1845 it got a route to Bristol. The trains were Midland, then LMS, then BR(M). It was transferred to BR(W) in 1957, but the bulk of trains remained LMR. 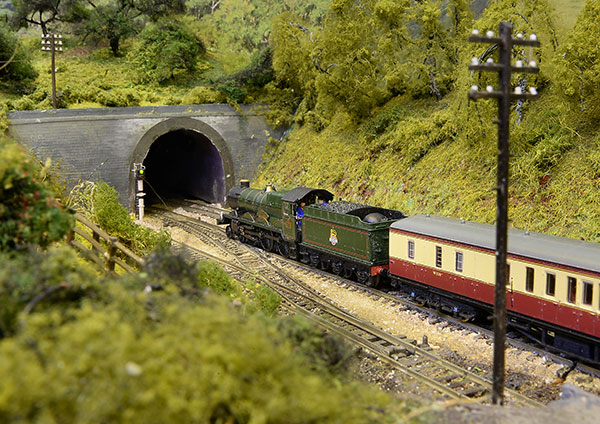 A Graham Farish ex-GWR 4-6-0 'Castle' heads a Western Region train into the tunnel. Guarding the entrance is the only colour light signal on the line used to improve visibility against the embankment behind. Western trains usually used the ex-GWR line on the far side of the Severn, but a few were sent this way to maintain driver knowledge for when it was used for diversions.

We looked at nearly 50 locations before deciding to model Wickwar station and goods yard in the early-1950s. We then had to answer the question: what parts should we model, and from what angle? We made a paper model of the area about 2ft long and this convinced us to abandon our original idea of having the railway at the front, and view the line from the other side, with the railway at the back. We chose to compress the ends of the model slightly, so the end boards are only about 2/3 scale length, while keeping the centre two boards exactly to scale. 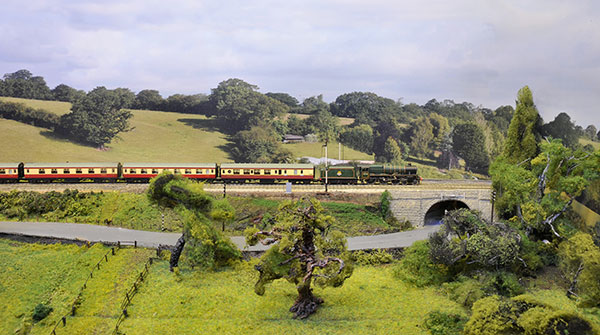 A Bristol-Bradford express hauled is by ex-LMS 4-6-0 'Jubilee' No. 45730. The first coach is of post-war Stanier design with a circular porthole toilet window.

In planning the layout, we visited Wickwar several times, taking photographs from every angle. We met with the local council, several local residents, and the brewery - all of whom were very helpful. We collected photographs from everywhere we could: books, collections, websites, postcards, and photographs given to us by locals: we have photographs of most of the railway, but for some areas, views are missing. We have no good view of the goods yard, for instance. We used aerial photographs, both current and post-WW2 - these often show areas not covered by other photographs. We have many maps, including LMS and BR track plans, and we got details of the trains from photographs, working timetables, carriage workings, and train logs, recorded by enthusiasts in the 1950s. 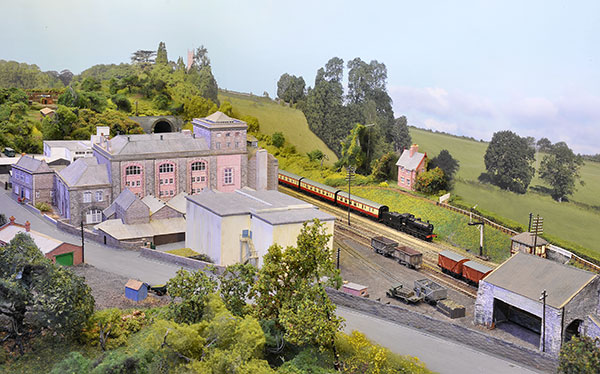 A local four-coach Bristol to Gloucester train is lead by a Graham Farish 4F. Four coaches is all the platform would accommodate. Behind is the stationmaster’s house, with a path leading to the station and another to the goods shed.

The layout is essentially two independent ovals of track that can run as analogue or DCC – we normally run the Gloucester direction in analogue and the Bristol direction DCC to cater for different members’ stock. The most important part of the control system concerns the two fiddle yards which have three roads, each divided into four to six equal length sections. When the circuits detect that the section ahead of a stored train is empty, it moves the train forward. The train behind can then proceed, eventually creating space at the back of the road for the train just sent out. A train may occupy one, two or more sections, so trains of different lengths are stored efficiently.

MERG Train On Track Indicators (TOTI) detect a small current passing between the rails through the wheels/axles to tell when a section is occupied. Locomotives and illuminated carriages pass a current already, in other cases a few axles at the end of the train have had resistors added across them. We have found three axles at the rear of each train are needed for reliability - at exhibitions we now can go for an entire day without a crash! Further advantages are that if a train uncouples, the following train is stopped from running into it, and we use the information about where trains are to operate the signals automatically. 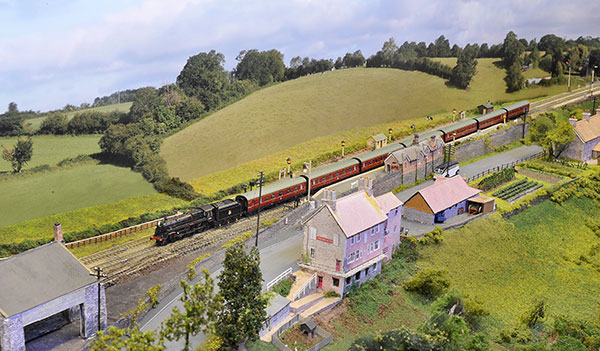 An inter-regional express hauled by a Graham Farish BR Standard Class 5 passes The Railway Hotel in the foreground, by this time a café used by bikers.

We use servos with MERG mounts and electronics to operate points, signals, and to control the road system. Everything is linked together using the MERG CBUS system which reduces wiring and gives flexibility to locate controls on any panel.

We intended doing shunting of the small yard, but never have - there was only one goods train a day that stopped, and to ‘run around’ wagons, it had to block both lines. As any shunting would be largely hidden from viewers and operators by the brewery, we prefer to keep trains running in a continuous loop at exhibitions.

The baseboards are lightweight construction from Styrofoam beams with lightweight Okoume ply – as used for boat building – glued each side. They are open frame with more foam inside as the base of the scenery. The foam is covered with Sculptamold, a fantastic material for forming a thin hard surface over foam because it sticks to anything and is lightweight. It’s available from most art shops and a £10 bag covered most of Wickwar. 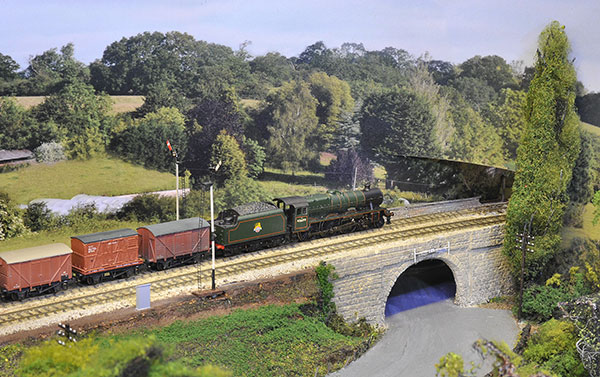 Ex-LMS 'Jubilee' 4-6-0 heads a van train past the signals which are operated automatically from the train on track detectors. The trains depart 'off-scene' through a flap in the backscene, which is back-lit to avoid a shadow.

The Sculptamold was painted brown or green and static grass or flock was added, blending it with the colours on the backscene at the back to hide the join.

The Little Avon river was created using a two-part yacht varnish, over a carefully-modelled and painted river bed with its steep banks. Trees were made after studying Gordon Gravett’s two books, with armatures of twisted copper wire and canopies made from a variety of net-based foliage. The criterion for all the trees on the layout was based on a desire for a variety of shapes, sizes and colours. Commercial foam pieces were added liberally as undergrowth and bushes. 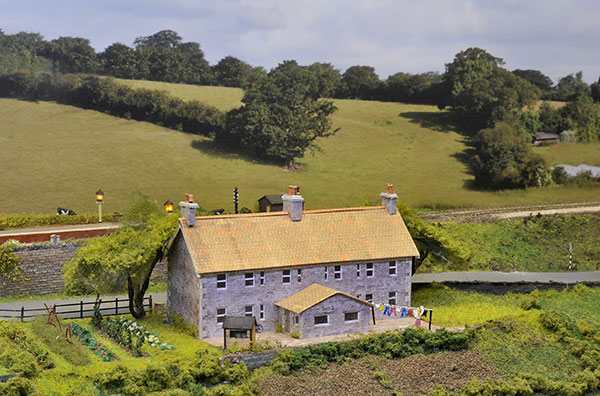 After we started the layout, we realised the road along the front was ideal for moving vehicles. The only option at the time was the Faller system which has self-powered vehicles that follow an iron wire, laid below the road surface. A magnetically-operated switch in each vehicle allows it to be stopped by under-board magnets, moved into position by servos.

The vehicles seen are all modern German ones, so we had to find and fit suitable alternative bodies, mainly from Oxford Diecast. The laying of the wire is critical – slightly too deep or sticking up can cause vehicles to go wrong, and it has taken time to get working reliably. We have extended the basic loop with a diversion for lorries into the brewery yard and added a lady who sticks out her arm to stop the bus.

Recently we have used Tomytec chassis for coaches - these are similar to the Faller system, but needed the steering magnet adjusting upwards to run reliably on the Faller road. In places, we needed to remove some bumps. These mechanisms will only fit in a large coach, so we still need the Faller system for lorries. 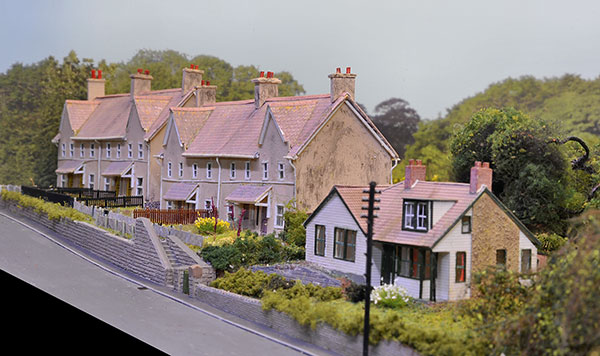 The wooden house, nearest, and terraces of council houses are still present at Wickwar, mostly unchanged. The wooden house at one time prepared food for workers in the brewery.

Wickwar is lit using LED strips - two ‘cool’ white and one ‘warm’ white above, about 9in in front of the layout and angled at 45 degrees. We also use two warm white strips over the centre to reduce shadows. By switching off all, except one cool white strip in front, we get a convincing moonlight effect that shows the lights we have in some buildings and trains. By the time you read this, we hope to be able to change between the two smoothly, using an Arduino and MOSFETs for control. The head and tail lights on trains are pre-wired surface-mount LEDs, bought online for 25p each.

We have about nine members prepared to attend shows requiring an overnight stay, with some happy to turn up for a day or to help at local shows. We limit exhibitions to six or seven a year, with a few weeks between each - a mix of venues local and distant. We try to have six people at each show, but we don’t operate to a firm schedule. The team members switch places and do the tasks they enjoy most - two operators, two people answering questions out front or on our demonstration stand adjacent, one sorting out potential problems, and one off-duty.

To read more about Wickwar and get the article in full, including tips on the backscene and construction diaries, see the Spring 2019 issue of BRM. Download today from www.pocketmags.com/BRM.