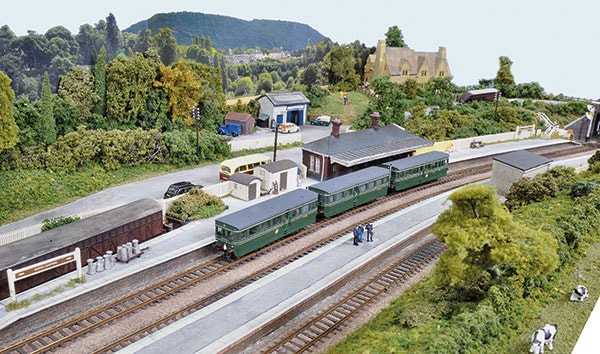 We tour another of David Westwood’s evocative exhibition creations, built to recall life in the Cotswolds during a period of railway evolution.

‘Marsh Chipping’ is, of course, fictitious, but growing up on the edge of the ‘Black Country’ as I did, day trips to the Cotswolds were a regular event. The honey-coloured stone buildings in villages with clear streams running through them and the sheer Englishness of it all left an indelible impression. All very romantic I know but it also helped that most of the places still had, at that time, (late 50s/early 60s) their railway connections. Visits to Moreton-in-Marsh, Chipping Campden, Chipping Norton and Bourton-on-the-water would always include a visit to the station while my mother and sister went around the shops. It was only some years later I realised that this wasn’t because of my enthusiasm for all things railway-related, but my father having ‘forty winks’ while parked in the car park. In any case, I was only too happy to spend an hour or so soaking up the atmosphere and occasionally, certainly on some of the quieter branches, seeing the odd train. All of these memories have stayed with me over the years and when the opportunity finally presented itself with access to the spare room I had the chance to try to recreate my memories. ‘Marsh Chipping’ is that attempt. 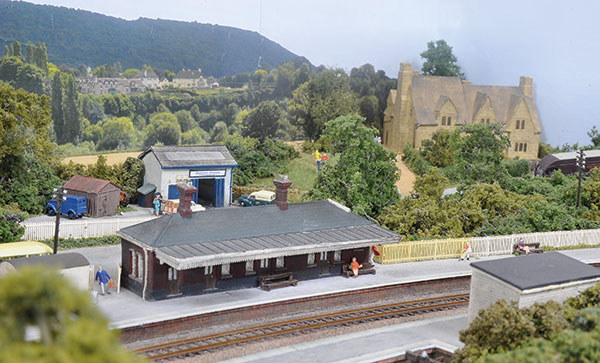 When I was planning the layout, I decided not to model anywhere too specific, but to give a flavour of the Cotswolds area. In the end I settled on a variation of the trackplan of Chipping Campden with the goods shed and overbridges borrowed from Moreton-in-Marsh. I also decided to include a branch to add to the variety of train movements.

The layout is made up of two baseboards 4ft x 2ft 6ins with two more boards 1ft 6in x 2ft 6in attached by hinges at each end. These fold up and the two halves are bolted together to form a box for transportation. The baseboards are made from 50mm expanded insulation foam with a softwood frame and topped with wood fibre insulation board which makes for a light but very sturdy construction. This has stood up to the rigours of eight years of exhibitions so far with no problems. When erected, the main boards are held together by 8mm bolts and sit on adjustable metal trestles. The ends have their own separate legs, also with built-in height adjusters. 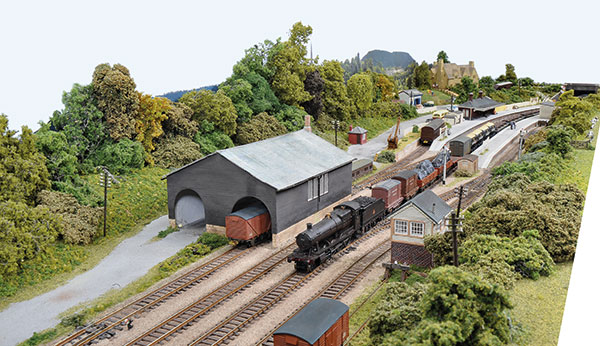 It’s important to remember that the visitors attending exhibitions aren’t necessarily all railway enthusiasts, so I always include small cameo scenes in an attempt to bring a little humour and life into what some might see as watching the trains go by.

On ‘Marsh Chipping’ there is a painter working on the station fencing being distracted by a young lady in a short skirt, a runaway horse nearly causing an accident, a goat eating the flowers in someone’s front garden and a family out walking their dog for example.  It is very pleasing when these are noticed and commented on. One of the other things always mentioned at exhibitions is the Cotswold stone buildings. A lady actually spent several minutes at one exhibition deciding which one she would like to live in. They are from S D Mouldings and I first saw them some years ago on Andy Calvert’s ‘Nether Stowey’ layout and was immediately taken with them. I built a whole village with them on a previous layout, but unfortunately as far as I know, are no longer being produced, although they can occasionally be found online. 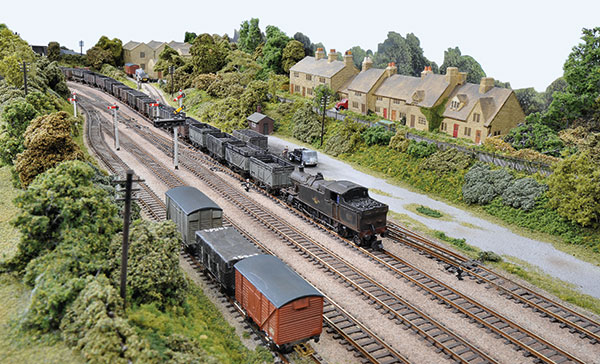 The station building is a resin casting from Timecast Models, as are the huts. The platform bases and overbridges are from the excellent Scalescenes range of downloadable and print-at-home kits. The goods shed is a scratch-built version of the original one at Moreton-in-Marsh. It is constructed of card from cereal boxes with individually-glued thin styrene strips to represent the wooden cladding on the sides of the building.

The part of building a layout that gives me the most pleasure is creating the scenery. The landscape is formed from blocks of polystyrene shaped with a hot wire cutter and fixed down with No More Nails adhesive. This is then covered with filler which has been coloured with dark brown wood dye which means that knocks or scrapes don’t show as white marks and any missed areas of scatter look like bare earth. Scenic materials are mainly from Woodland Scenics, Javis and Heki. Trees are created mostly from Woodland Scenics fine leaf foliage but include some made with wire armatures and a few ready-mades which have had a repaint and additional foliage added. The scrubby undergrowth and hedges are a base of lichen with a combination of fine and coarse scatters fixed in place with spray on glue and sealed with hairspray. The amount of greenery is regularly commented on (there are over 100 trees) but as I am always telling people, you can’t have enough trees. 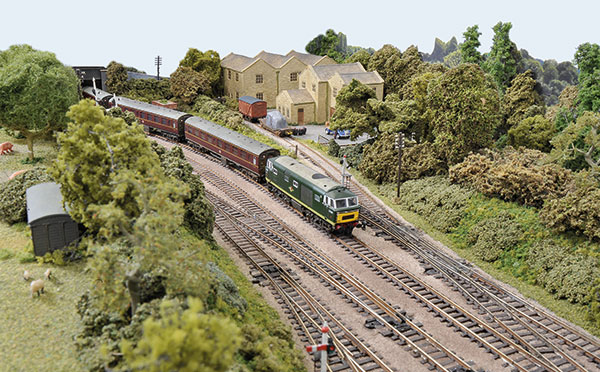 Track and points are Peco code 55 on the viewing side and code 80 in the fiddle yard. Viewing side points are operated by wire in tube connected to mini slider switches which also change frog polarity. Fiddle yard points are electrically-operated via a diode matrix for route setting. Ballast is genuine granite, washed to remove dust and fixed with 50:50 PVA/water mix. Rails are painted with rust colour and ballast finished with a wash of sleeper grime. Weathering powders are then used to highlight various areas, where locomotives would stand, for example.

Operation is standard DC with three controllers - one for the Up line, one for the Down and one for the branch. The latter can be switched to control either Up or Down lines using a simple cab control system.

The majority of the locomotives and rolling stock are from the usual suppliers and have been weathered and detailed where necessary, but special mention must go to Hugh Griffiths, a fellow Syston MRS member, who has built several of the locomotives in regular use on ‘Marsh Chipping’. The 28XX 2-8-0, 72XX 2-8-2T, 42XX 2-8-0T and a 73XX 2-6-0 are all examples of his expertise and their quality is superb. He is one of my regular operators and sometimes brings along what he calls his “funnies” for a bit of a run. When at exhibitions it’s quite possible you might see, amongst other things a GT3, 10100 ‘The Fell’, 18000 Brown Boveri gas turbine, 58100, ‘Big Bertha’ the Lickey banker and the never built, Riddles designed 2-8-2, which eventually became the 9F. They’re not prototypical, but they’re fun and always cause comment - in some cases, complete bewilderment.

I couldn’t finish this without thanking all those who’ve helped operate ‘Marsh Chipping’ at exhibitions. John Malpus, who got me started in the first place, Mike Collins, for introducing me to a diode matrix and other things electronic, Hugh Griffiths, for his exquisite locomotives, Eric Beech and Chris Leach, for stepping into the breech at the last minute and Gary Tabener, whose first exhibition meant driving to Newcastle upon Tyne.

To read more about Marsh Chipping and get the article in full, see the September 2018 issue of BRM. Download today from www.pocketmags.com/BRM.