The construction of Loch Oran was David Harrison's first attempt at building an N gauge layout, having previously worked in OO gauge. The landscape was based on that around Crianlarich, but a loch was added for scenic interest. Some of the buildings in the village scene are based on those in Crianlarich, though the upper station is based on the plans for Ardlui because the original station at Crianlarich was destroyed by fire in 1962 and replaced by a different style of building. 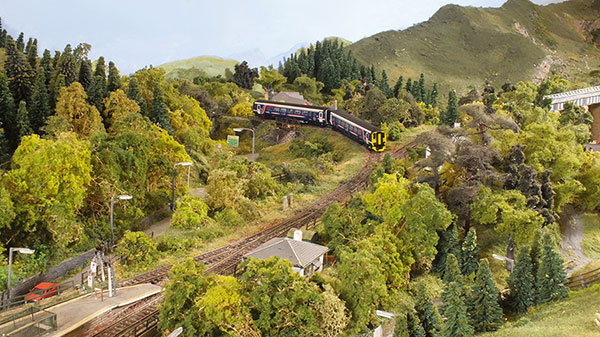 Rounding the tight curve to join the line into the station is a First Scotrail Class 158. The bleak landscape beyond lacks trees and is quite convincing with its rocky outcrops.

The main considerations in planning the track were realism and entertainment for the viewing public. He also wanted the operation of trains to be straight forward. There are two separate circuits: a lower level – the Callander to Oban line and an upper level – the Glasgow to Fort William line. Both circuits are independently controlled with the spur from the upper station running through to storage sidings. Each circuit has been made so that it can be operated as a continuous loop or end to end. The passing loops for each circuit are behind the back scene. 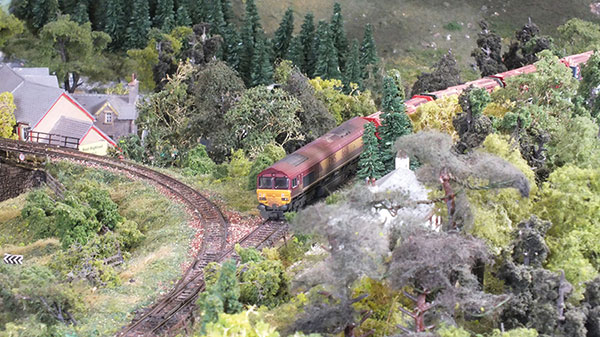 The West Highland line is famed for its timber traffic and here, its miniature equivalent sees 66111 in EWS livery with a consist of OTA two-axle timber wagons. Authentic traffic for an authentic line.

Control is by DC and points are operated by motors and switches. David considered going digital before building the layout, but because both circuits are single track and operate on a one locomotive in steam principle, it seemed an unnecessary expense, though he hasn't ruled out going digital at some point in the future. Multiple units run from end to end, while locomotive-hauled trains run continuously. When nobody is looking, trains are stopped in the passing loops behind the scene and a different train is dispatched. Locomotives and stock are typical of those found on the lines in the 1999 – 2008 period. 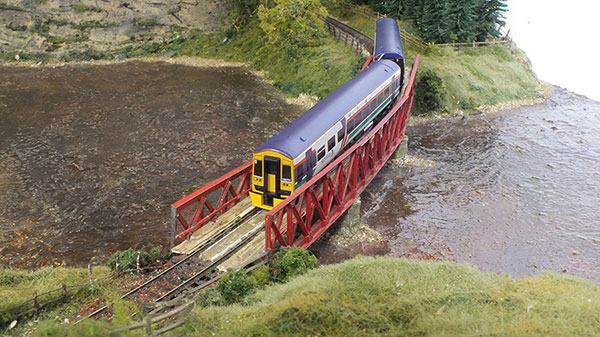 A very clean-looking Scotrail 158741 crosses the steel bridge across the Loch exit. The small stones used around its piers are quite effective.

During an exhibition, viewers frequently ask questions regarding the scenery. The hills were made using plywood formers, to which chicken wire was stapled. The chicken wire was covered in Modroc and left to set, then coated in plaster which was painted with green gloss paint. Handfuls of fine scatter material were spread onto the wet paint which was left to dry. This was washed over with diluted PVA and different shades of static grass were scattered with Woodland Scenics scatter. Hair spray was used to fix everything in place.

The rock faces were made from slithers of polystyrene glued in the appropriate places. The slithers were laid to create the effect of strata. The polystyrene was given a wash of thin plaster, which was allowed to run into all the cracks and find its own level. Once the plaster was dry it was painted with appropriate shades of emulsion paint. The strata lines were emphasised with darker paint. When the emulsion paint was dry, the rocks were washed over with a diluted black wash.

The loch is a flat surface and was one of the last features to be made. With the scenics around the area of the loch completed and the loch bed tidied up, small areas were covered with a thin layer of Artex. The Artex was then stippled with a small stiff flat paint brush to create the effect of ripples on the water. Some areas were left calm, others a little rougher. Once the Artex had dried it was painted with poster paints in various shades of brown with some light touches of grey. When the poster paint was dry it was given a coat of clear gloss varnish every day for a week. A sandy shore and reeds could then be added. 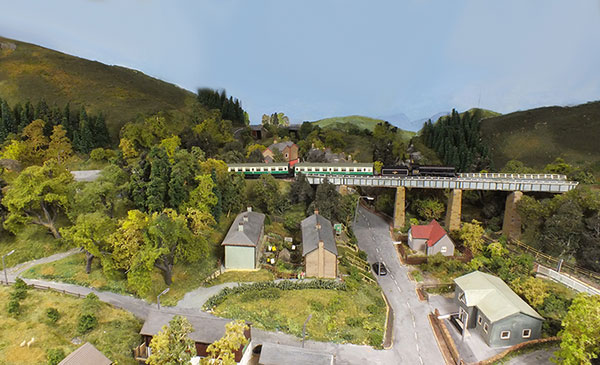 A steam charter crosses the viaduct. In charge is a B1, hauling two Caledonian West Highland Line Mk. 1 coaches. Below, the parallel road and rail line disappear into the backscene.

There are over 800 trees on the layout. The conifers are commercial products from the Heki range, though one or two other makes are mingled in and some have been customised with scatter materials. Deciduous trees are a mixture of sea moss covered in scatter materials or others made from trunks manufactured by Woodland Scenics with its foliage net stretched over branches. The Scots pines have been made from Woodland Scenics conifer trunks which had holes drilled into the trunks, then thin wire glued into the holes and twisted into the shape of branches. Heki flor was stretched thinly over these. All trees were given a squirt of hair spray to fix foliage.

The buildings in the village scene are scratch-built and are based on buildings actually in Crianlarich. The Loch Oran Hotel near the layout front is based on the Tarbert Hotel which is a few miles back down the real line on the shores of Loch Lomomd. Some of the smaller buildings are from the Lyddle End range.