Solution to a problem

Peter Latham describes building Imperial Yard as a challenge. Two baseboards were donated to him, measuring 8ft x 14ft in total. He was frequently told by exhibition visitors that they'd love to build a model railway, but didn't have space. His challenge was to place as much onto the baseboards as possible, without it all being track. He decided that because he only had 14in in width, his layout had to be a terminus. 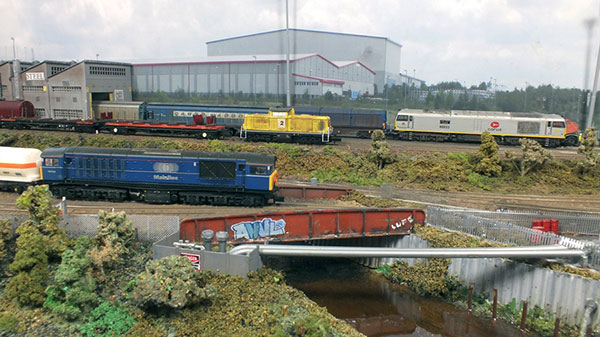 A Mainline-liveried Class 58 crosses the dirty culvert as Bo-Bo No.2 and 60033 Tees Steel Express in Corus grey handle steel traffic in the background.

After a lot of head-scratching, Peter found he was able to accommodate four different shunting areas for steel, liquid propane gas (LPG), a wagon repair works and civil engineer sidings. To break up the flat-world look he raised the steel sidings 1in above the rest. Another visual break was to cut out the baseboard and add a culvert. Unfortunately the 14in width wasn't enough for a useful fiddleyard, so he added a triangular piece of plywood, giving a maximum width of 24in. Luckily, his baseboards sat on 24in wide table. 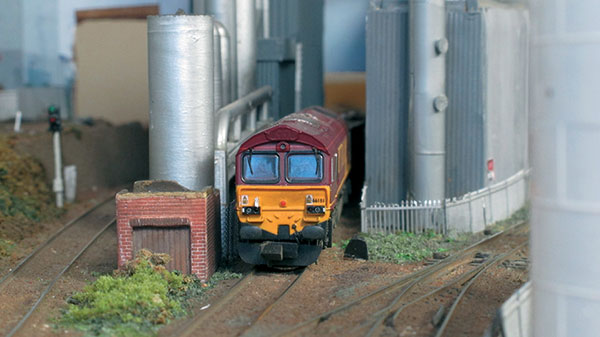 Emerging between the LPG tanks is a clean-looking 66181. The LPG depot was built from Kibri and Walthers kits.

All the trackwork is Peco Code 55 finescale, with visible points operated by rigid wires under the baseboards. The wires pass through electrical 'chocolate-blocks' which keep them in-line and prevent them from dropping out of the points. Peter wanted a good method of uncoupling, so used a method he was familiar with for many years - Peco uncoupling arms on Peco couplings operated by SEEP electro-magnets. On a Graham Farish wagon, the original coupling box is removed and substituted for a Peco one. Wagons which can be uncoupled have their axle boxes painted yellow to help operators. His only problem is when a new wagon with yellow axle boxes is placed on the layout before alteration.
Control of the layout is by KPC and All Components hand-held units fed by an All Components twin transformer. Both controllers give good shunting speed and smooth acceleration and deceleration. His buildings are from various sources - the steel warehouse and electrical sub-station are from Kato, most of the LPG depot was from Kibri and Walthers kits. Other buildings are from Unit Models. Some buildings were scratch-built with corrugated sheets on a cardboard base. 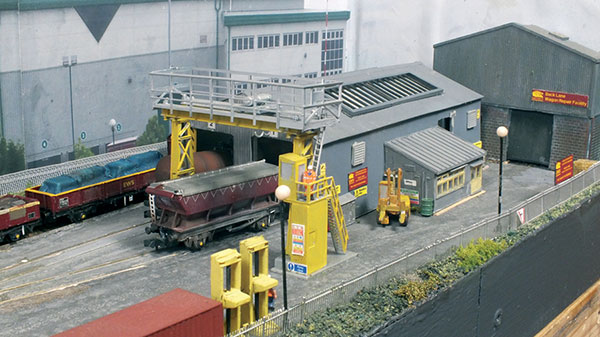 A wagon servicing depot allows a mixture of rolling stock to run on a layout which couldn't ordinarily be justified. Pristine or weathered examples are equally acceptable.

Peter operates stock on the layout which would have been seen around the year 2000. His freight wagons are from Graham Farish and Dapol or kits from Chivers, Ian Stoate and the N Gauge Society. All wagons are weathered with Tamiya Weathering Master, except those recently re-painted at the wagon repair depot. He describes Tamiya Weathering Master as little boxes which look like make-up kits (or so he's told!). They have a very useful range of colours including Rust, Sand and Soot.
Imperial Yard has now been on the exhibition circuit and improved from one controller to two. This allows him to control the steel area independently to the rest. This allows him to run something to the left of the visitors as move thngs in the yard to the right. 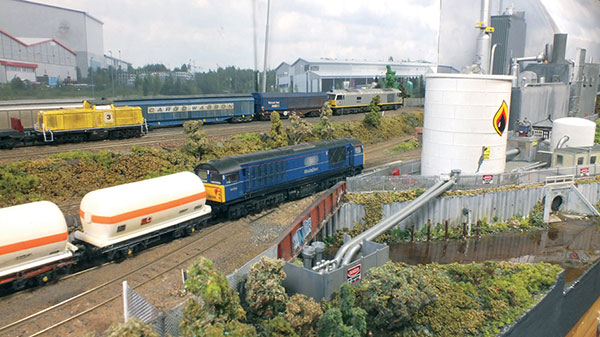 Peter's industrial photographic backscene is largely responsible for setting the location because of the narrow width of his layout. Warehouses and factories dominate the skyline.

Peter has refined his stock over the years and each of his exhibitions has different locomotives and wagons. Overall, he describes it as having been fun and a 'learning experience'. Thanks go to his fellow operators and exhibition organisers who often work extremely hard for few or little thanks and last but not least his wife Helen who puts up with it all.