Richard Hart describes the latest exhibition layout to emerge from the prolific Alsager Railway Association's N Gauge group, after a decade in the making.

BRM magazine readers might recall from articles and DVDs over the years that the Alsager Railway Association's (ARA) N gauge group has been prolific in producing exhibition layouts. The yardstick for members for the last 25 years has been the club's flagship layout, ‘Newcastle by the Water’, a favourite at many an exhibition. However, a decade ago, and after many iterations, a succession plan was conceived that drew on the experience of operating ‘Newcastle’ by adopting certain successful features and introducing new ones to bring it up to date.

The architect of ‘Newcastle’ was the late Fred Johnson, a modeller well respected throughout the exhibition circuit and stalwart of the ARA. The mantle was picked up by Fred's cousin, John Cox, who is the club's vice chairman as well as exhibition and layout manager. The first collective decision was to dedicate the new layout to Fred, by naming it ‘Fredstone Lane’. 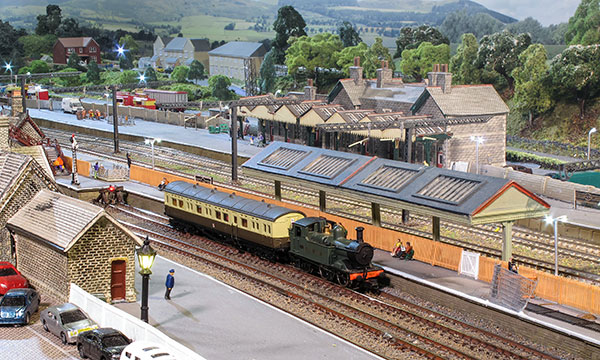 The overall dimensions of 24ft x 9in by 4ft in depth is the same as ‘Newcastle's'. This has enabled certain elements, such as the lighting rig, curtains and pelmet, to be shared. This has also helped cost control and avoided reinventing the metaphorical wheel.

The six baseboards of equal size are paired with brackets for transit, and bolt together for shows, using John Cox's trademark tongue and groove end boards for stability and smooth running across board joints. Each board has hinged legs with diagonal support struts that fold up under the board. The two boards with four legs offer themselves as anchors when setting up, with the other four boards with two legs each being attached in sequence.

The surface board on which the track and scenery sit is made of 9mm plywood. Originally, the track underlay was foam sheeting throughout, but this proved unsatisfactory and the scenic section was re-laid with cork and then re-ballasted. The fiddle yard still has the original exposed foam, although coloured to delineate track function and direction. However, this is becoming brittle and is flaking so will eventually be replaced. 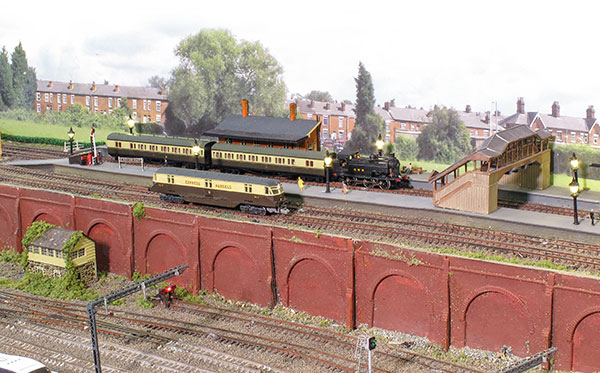 'D'-plugs are daisy chain linked between the boards from a central power box, which in turn links to six control panels, each with a Gaugemaster analogue controller, and a mimic plan with stud and probe wiring to a CDU and Seep point motors. One improvement made is to utilise Steve Lowndes' (see ‘Bluebell Cutting’ BRM July 2017) hollowed-out biros as the probes with stout wires replacing the ink tubing. 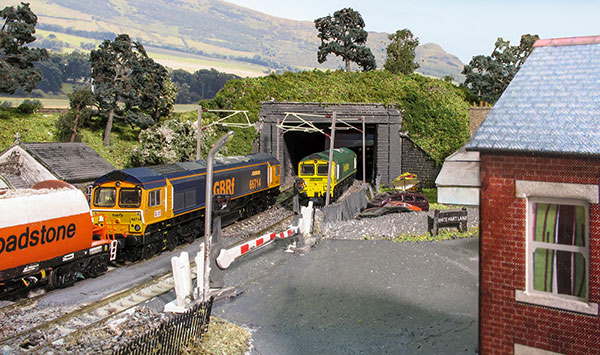 ‘Fredstone Lane’ is a modern fictitious layout and the track comprises of inner and outer circuits at different levels with cross-overs and reversing loops, with separate double tracks for passenger and freight. Two operators control a passenger and goods line each in a clockwise direction, while two others operate similar services in the opposite direction.

A fifth operator controls the outer pair of loops in both directions, which are dedicated to heritage trains, with its own station, halts and hidden storage yards. This line affords an opportunity to run virtually anything under the guise of heritage, including Thomas and friends, who are greatly appreciated by children of all ages. Preserved steam-hauled trains and holiday specials are also frequent on this outer track.

At one end of the layout, maintenance and freight marshalling yards offer shunting opportunities for the sixth operator. The yards are accessed from the main line, which requires operators to talk to each other!

One of the ARA standards is that our layouts are no more than one metre in height and thus suitable for wheelchair visitors to have an unrestricted view. We see this as a simple courtesy and we know from feedback that it is appreciated. 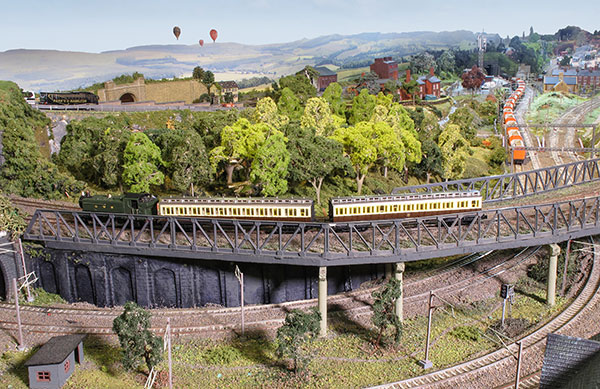 The team's emphasis is on entertaining exhibition visitors rather than 'rivet counters' and so, while we have a considerable nod towards authenticity, a liberal approach to a constant supply of stable and visiting trains from different regions and eras is encouraged.

Stations and sidings at different heights enable local stopping trains to be passed by through express passenger and goods trains. Buildings are a mixture of Metcalfe card kits, Ratio and other plastic and resin buildings, with lineside features from P&D Marsh and Ten Commandments, with trees, lichen, sea foam and scatter from various traders at exhibitions. Street and platform lighting, as well as flashing lights on police cars, together with much underside electrics, came from Kytes Lights.

The principal track of the layout is modern image, with overhead catenary being a mix of Peco for single lines and N Brass Loco portals for spanning multiple tracks. We have not fitted overhead cables between sections of the catenary. Experience suggests that, even for the most careful of operators, rectifying a derailment can cause even bigger problems with hands that are far from N scale. The track itself, of which there is over 200ft in the scenic section, is Peco Code 80 with concrete sleepers on the main line and wooden on the branch. We employ Peco Electrofrog medium-radius points throughout.

Behind the scenic section is a storage-cum-fiddle yard, which enables the potential of N scale to be realised by accommodating full length High Speed, Pendolino and goods trains as well as local DMUs. Each of the four main-line operators can accommodate five or six trains, with the passengers having the bonus of out-front station platforms that can be by-passed. 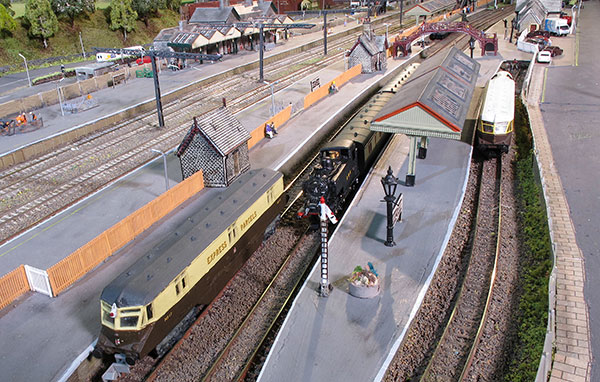 The ARA doesn't own any rolling stock and so all trains are provided by members from their own stables. Most are diesels, but increasingly we are seeing locomotives with pantographs to complement our catenary. The diversity of members' home layouts in terms of eras and geographical location also underpins why we cannot be overly prescriptive about what runs on the layout. Primarily, locomotives and rolling stock are Dapol or Farish with some CJM and a few kit-built examples.

The focal point at the other end of the layout is another of John Cox's trademark features (See BRM December 2018 on his layout ‘Knot Littlefield’), live running water which is powered by a Volvo windscreen washer motor. These water features are much loved by visitors who have to demonstrate a sense of humour in response to our standard way of answering their question of “is that really live water?”; they soon dry out.

The 9in high scenic break sports several ID Backscenes hills and dales self-adhesive sheets, spanning some 24ft in length. In some places we have abutted low-relief buildings, created by cutting buildings in half, lengthways, on the club's bandsaw to double the frontage. 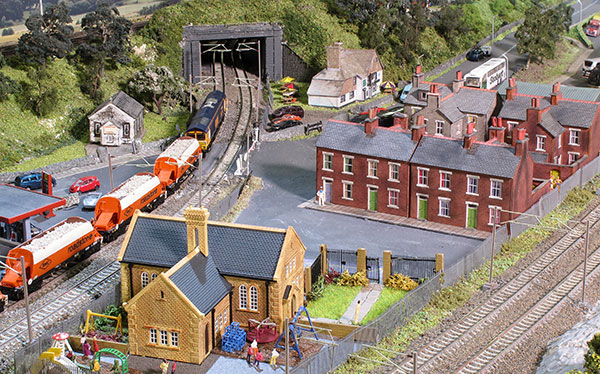 Under John Cox's direction, many members, past and present, have contributed to the building of ‘Fredstone Lane’ over the last decade. Some members are dab hands at making buildings, others at soldering and wiring, yet others are thinking up cameos and populating scenes with people, vehicles, animals, machinery and vegetation. Some features added a decade ago have already been replaced and no one is (too) precious about their contribution, even when superseded.
For example, my first task when I joined the ARA back in 2011 was to build a motorway section passing over the marshalling yard, inspired by the northern end of the M5 adjacent to Bescot Yard. After much measured research and six weeks of construction, it was completed just before I went away on holiday. Upon my return I found that a committee had decided they didn't like it and scrapped it. However, the good news is that I am not bitter about it and almost never mention it!

Sadly, some members have died and we've tried to incorporate their names in the layout. We started by naming Bingham Halt after our late colleague Keith, who constructed the rock face of plaster on Styrofoam. Subsequently, and bearing in mind our average age is on the advanced side of middle aged, I decided it would save time if I started naming features after contributors now. Consequently, ‘Fredstone Lane’ includes such landmarks (in no particular order) as Howard's Way, Lowndes' Lane, Cox's Causeway, Guildford Close, Whittaker Way, Finney's Farm, Small spare parts, The White Hart pub, Ryan Junction, Christian Chapel and so on. 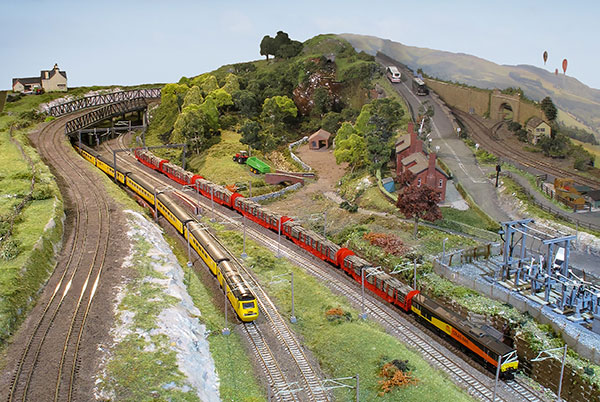 ‘Fredstone Lane’ has had a few outings to exhibitions, winning two cups at our inaugural show at Bristol, and we operated it at our own exhibition at Crewe last November. The layout has been well received by the entrance fee-paying public, which is gratifying, as we thrive on interaction with the public. Otherwise we would simply build the layout and stay in the clubhouse operating it in private.

So where next? We are already thinking of a new club layout; perhaps now for something completely different. In the meantime, we have a host of exhibitions to visit with ‘Fredstone Lane’ and we welcome BRM magazine readers approaching us with questions and observations.

To read more about Fredstone Lane, see the June 2020 issue of BRM. Download today from www.pocketmags.com/BRM.