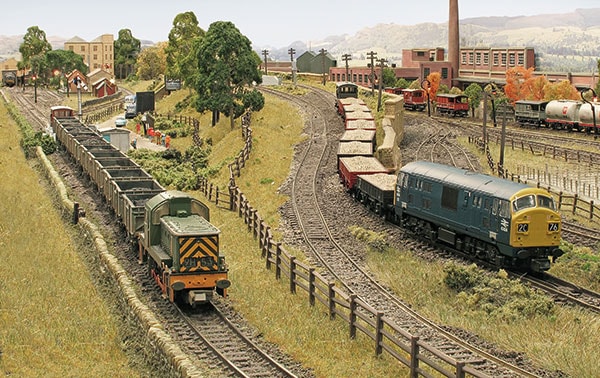 Inspired by a brief encounter with WR diesel-hydraulics, Andy Small built this layout set during the transition period to BR corporate blue.

It all started in 2002. I had been regularly travelling to Europe with a close friend to photograph railways following the arrival of EWS and a loss of interest in the UK scene. But a career change and house move put an end to this.

My close friend was a member of Warrington Model Railway Club, modelled in N gauge and suggested I join him on a trip to the Warley NEC show. I was undecided, but the following year I met the late Fred Johnson at the Alsager Railway Association’s (ARA) Crewe exhibition. I was still relatively new to the area and looking for a model railway club. Fred made me most welcome and I joined a few weeks later.

I dabbled with OO gauge in my 30s, military modelling in my 20s and later I had concentrated on railway photography both in the UK and Europe. I became involved with the Intercity Railway Society and ran the North West Branch for ten years organising and running monthly tours to depots throughout the UK, thus providing excellent photographic opportunities.

I had however, never built a layout and never modelled in N. 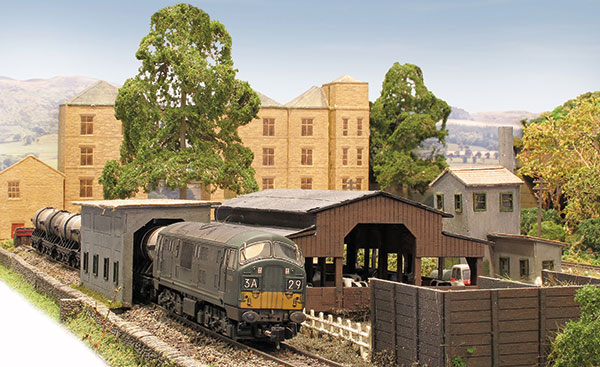 My intended period of modelling was going to be what I had seen as a spotter in my early teens, give or take a decade, so I concentrated on 1955-65, BR Standard steam and green diesel locomotives and to this day its my preferred choice.

I started to build a large permanent layout in the garage (it was too small for the cars anyway) and it was to include my chosen UK time period and have a modern German railways section as well. As the future of Graham Farish was in doubt at the time, I collected Deutsche Bahn models too. I toyed with DCC but I was advised by a well-known model shop to forget it if I was using Graham Farish steam locomotives - I still haven’t finished that layout!

After joining ARA I became involved with its large N gauge layout ‘Newcastle by the Water’, which was modern image. No ‘kettles’ there and slowly I acquired a few items that would fit that period.

In 2008, I became a part of the ARA N gauge exhibition team, which is regularly invited to model railway shows. Several members have their own N gauge layouts and I helped them out too. This led our Exhibition Manager, John Cox, to badger me into building my own. He said he had a set of readymade baseboards 10’ by 3’ that I could use, from 9mm ply with 2” x 1” softwood framing, and so it began. 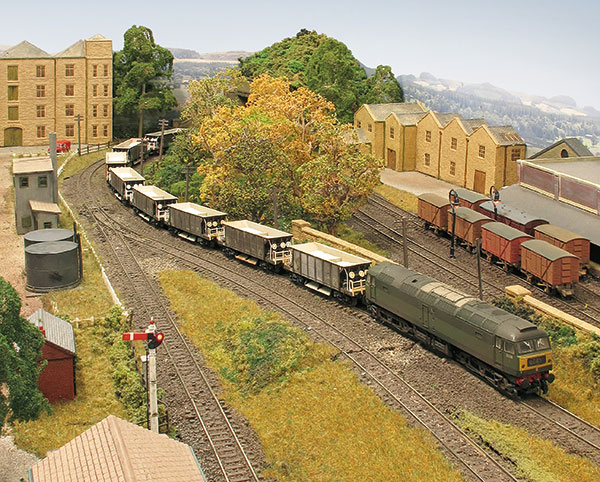 I quickly measured the conservatory at home and estimated that it would fit - I was wrong! So, I commenced a track plan in 2010 knowing the only room in the house I could fully erect the layout was the lounge - the ‘management’ was not pleased!

I had seen a lot of layouts at shows; most had stations and a lot were end to end. I wanted a circuit to show off the rolling stock, shunting for operator interest and public enjoyment. I wanted a raised main line, was not too bothered about a station and the settings had to seem rural and uncluttered.

Dapol had recently released the Class 35 ‘Hymeks’ and the hydraulics were the classes that I had seen only once. As a teenager, I took a day trip in 1965 to Barry scrapyard. I made it there and back in a day and had to change at Bristol. I had time to ‘bunk’ Bristol Bath Road depot. I was overwhelmed; ‘Warships’, ‘Westerns’, ‘Hymeks’ and maroon locomotives! I became fascinated with them.

I was desperately trying to resist the purchase, but a close friend persuaded me that the Dapol milk tank set on special offer at a show we attended was a good idea. It was cheap, and I was hooked - Western Region hydraulics it was to be.

Many moons ago, my first job after leaving school was working for a wholesale meat company near Oxheys signalbox in Preston. I had done some spotting there in earlier years and it had once been rail-served. So, I decided to include a farm/dairy, a slaughterhouse and an auction market for the cattle trucks and meat vans. The boilers would need coke and diesel fuel, and the setting would be somewhere in the West Country. 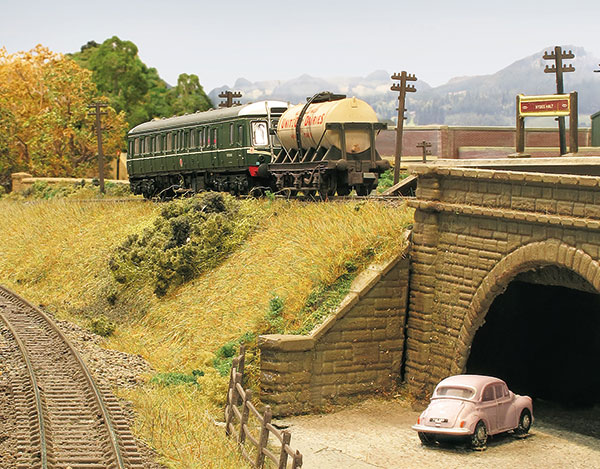 I took a field trip back to where I had worked over 30 years ago only to find it was now a housing estate. Fortunately, the Harris Library in Preston had a plan of the area and more importantly the layout of the animal holding pens which had been rail-served. Google Earth had a map of the sidings showing long lines of cattle trucks. I also made a field trip to Hemyock to look at what remained of the milk loading facilities.

I applied modellers’ licence, based the location in the West Country, and deemed that Beeching had made cuts and the line was now secondary with a single line retained for diversions. The branch to the farm survived, for now, and livestock was still delivered by rail to the slaughterhouse and market.

The whole layout was covered in PVA and 1/8” floor tiles laid as a base. This gave a solid base for the trackwork and a ballast shoulder once trimmed back. With hindsight I would use 1/16th cork next time as the shoulder was too high and had to be ‘doctored’.

I used Peco Code 55 track in the scenic areas as I prefer the finer rail profile. As I had some available, I used Code 80 in the fiddleyards and on the wing. Once the track was laid it was weathered using the excellent Phoenix Precision range of paints, both by airbrush for the main colour and by hand with a brush for the grubbier areas such as where locomotives stand and drip oil and older trackwork. 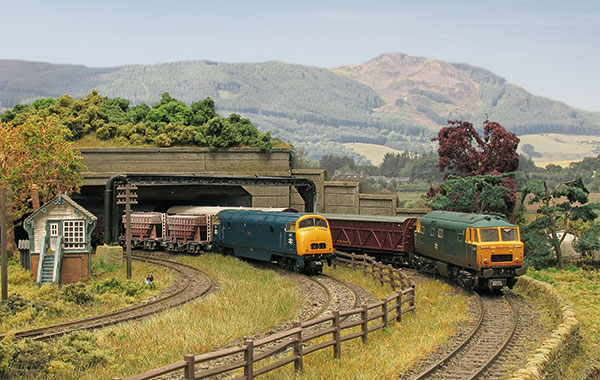 Point motors are SEEP PM2s, with the longer pins, all located beneath the baseboard. I prefer them to Peco as there is no need for a baseplate and they can be screwed direct to the baseboard. One piece of advice; use a drop of superglue on each of the plastic rivets holding the solenoids to the blue base plate before fixing, as they can be prone to working loose over time.

Controllers and transformers are from Gaugemaster and All Components as I love their close control and ‘creep’ ability.

The wiring was a challenge as when I started I had never even wired a point motor. However, several hundred metres of wire later and with a lot of advice from ARA club members, the point motors functioned, the control panels worked and all seemed well. However we did manage to blow up two 24V transformers in the process!

Scenics are by Auhagen, Woodland Scenics and the Scenic Tree Shop, whilst the ballast is from Green Scene. Trees are homemade or from the Model Tree Shop, which I would heartily recommend. Extensive use has been made of its static grass via a Green Scene static grass applicator, a product I fell in love with as soon as it became available.

The sheep and cattle pens are products from N Brass Locos by Nick Tilston who kindly produced the etches from drawings and photographs from my field trip to Bakewell Auction Market. As far as I am aware, these are the only products available that depict aluminium fencing with round posts that are to scale and are a major element of the layout that I felt had to be right. 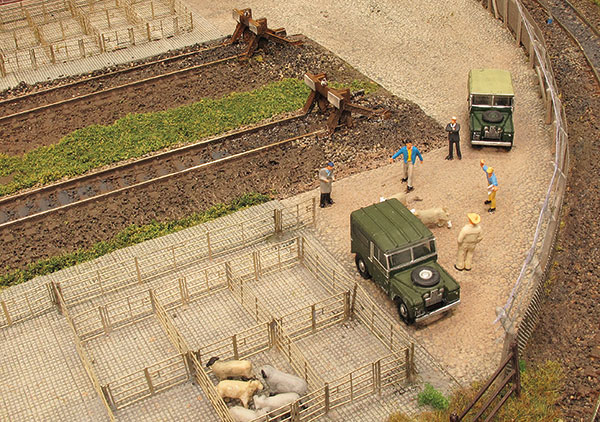 Fencing, of which there is a lot, is a mixture of items from Fantastic Shop, (County Rolling Stock) Ratio and Peco. The long retaining wall on the yard side of the scenic section is by SD Mouldings and was made to order and fitted and fettled in situ. Road coverings are by Redutex from DCC Supplies, a fantastic product that is simple to manipulate, a great time saver and easily weathered once stuck down using the self-adhesive backing.

The trackplan consists of two main lines running through an island halt platform which has been reduced to a request stop for local workers. There is also a single track branch line serving the local dairy which rejoins the main line and provides a diversionary route if required.

Access to and from the yards is by reversing from the main line into a head shunt, with control retained by the main line operator until the line is clear. Storage sidings can hold ten trains on the rear of the main layout, with a further five trains held for the branch on the wing section. 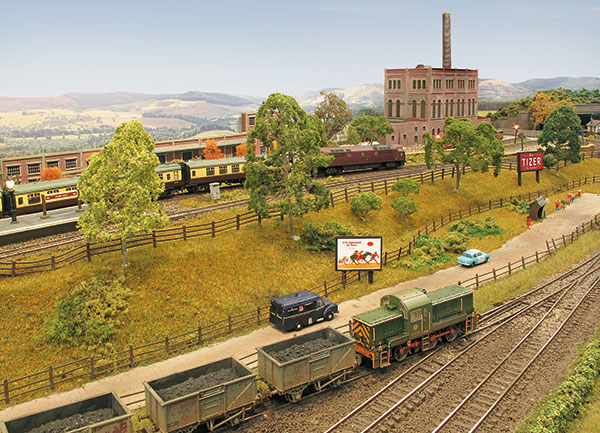 Isolation sections enable locomotives to be held at various points whilst others pass or shunt. Hands-free uncoupling is achieved by using SEEP magnetic uncouplers with Peco ‘Elsie’ couplings and droppers along with Dapol NEM magnetic couplers.

Rolling stock is a mixture of Graham Farish, Dapol and N Gauge Society kits and the period modelled is 1965-76 with green, maroon and blue diesel hydraulics dominating. Much of the stock has been weathered, detailed and renumbered but some remain to be completed at the time of writing. I just have to find the time to do it.

Passenger trains are operated by diesel-hauled Mk 1 coaches and, increasingly, DMUs. Freight serves the agricultural trade with fuel being required for local traders. Through workings are based on anything suitable both for the location and period and include china clay, cement, ballast, fish, milk and parcels. The layout can also be run as steam-only or as a mixture of both steam and diesel should exhibition managers request it. 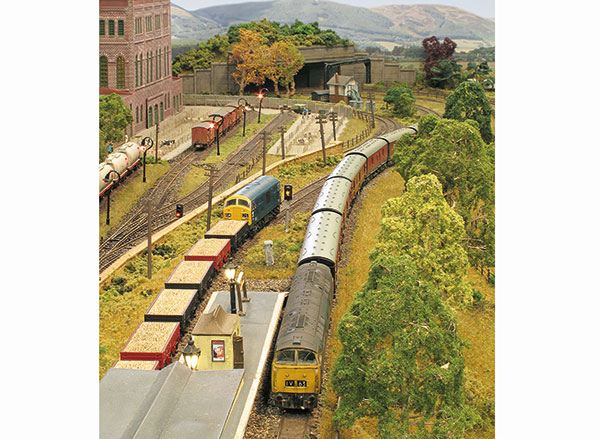 I have deliberately tried to achieve an uncluttered feel and depict an area that is in a slow decline, still aware of its roots and attempting to resist change and closures. Full operation can be achieved by four people with three control panels covering four separate controllers. Should the yards and the branch remain static, two operators can control the main lines thus ensuring constant movement on the layout.

The layout breaks down into four 3’ x 2’ 6” sections which bolt together to form two units and allows transportation to be achieved in two large cars.

Inspiration has come from many sources over the years, ‘Chee Tor’ in N and ‘Farkham’ in OO being particular favourites, with the inexhaustible supply of layouts produced by Steve Farmer and Pete Latham giving a constant challenge to emulate the detail that they have achieved.

My thanks must go to many, and they know who they are, but special mention must go to Carl Rutherford, Keith Bingham, John Cox, Steve Lowndes, Steve Farmer and to the all the ARA N Gauge.

To read more about Dunkow Road, see the November 2019 issue of BRM. Download today from www.pocketmags.com/BRM.