Rod Smith started his modelling career at an early age, modelling boats, gipsy caravans, buses in many different scales but his passion has always been railways and, in particular, Narrow Gauge Railways.

He has always made his models from scratch using anything which came to hand. This has included Kelloggs Corn Flakes Packets, chocolate boxes, pill containers as well as plastic and perspex sheet. This has given the railway its own charm and led to the name 'Biscuit Tin Railway' suggested by the Rochford Garden Rail Group of which he is a founder member. It is also reflected in the Railway's emblem which includes a Phoenix - a bird risen from the ashes.

Rod's interest in Railways started with OO and OO9 models but these were quickly discarded as they gave erratic running at the time. Eventually, he decided to use OO track with models built to a scale of 10mm/ft. This represented real life 18 inch gauge lines. It could be considered to be Gauge 1 narrow gauge.

Thus the BTR was born 37 years ago and some of the original engines and stock still run. The original BTR was an indoor layout but survived 2 incarnations as such before Rod moved to his present address and relocated the railway outside. He had always wanted to do this and the new garden allowed him the necessary space. 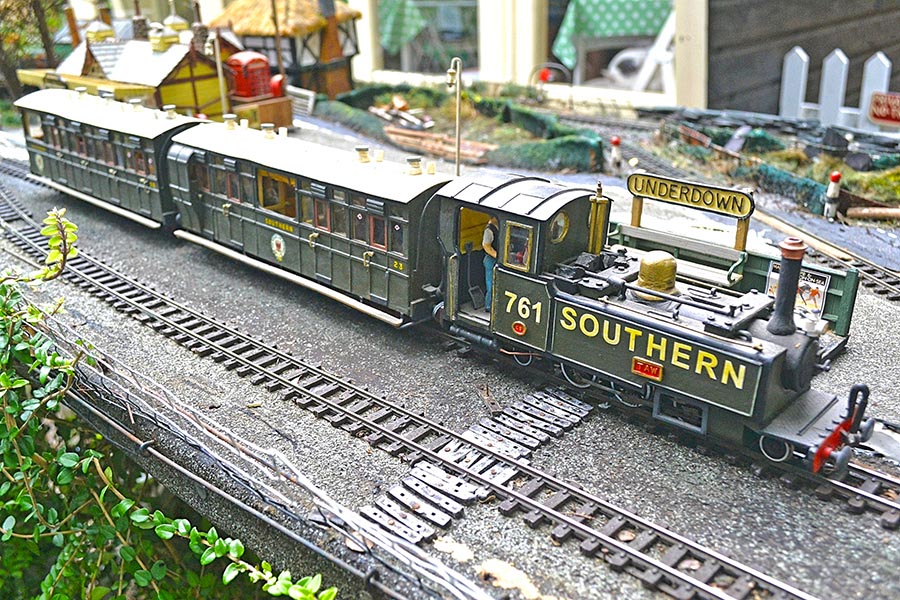 The railway itself is laid on a mixture of decking boards and marine ply panels covered in roofing felt mounted on fencing posts approximately 1 metre above the ground. This climbs to the Hill station roughly 1.5 metres off the ground rising at a gradient of 1 in 20.

The track joints are all soldered and control is 12v DC. However control is provided by a 2 Channel Futaba Transmitter connected to a receiver and 2 Servos connected to a Gaugemaster Controller situated in the workshop. The first paddle on the transmitter controls direction and the second increases speed in one direction. When let go the speed remains constant until the paddle is depressed when speed starts to decrease. In other words, it appears to have a brake function. Very unusual but totally mechanical and not digital. It also has the advantage of allowing control from any position around the railway.

When the BTR was first conceived it was based upon a Welsh N.G. line but this has been transformed over the years until, in its latest incarnation, it became a rural mineral line in Devon. Further developments are taking place to transform it into a line based upon the Indian Hill Railways.

Over time stock from South America, Romania, Malaya and St Kitts have all been added to the roster. 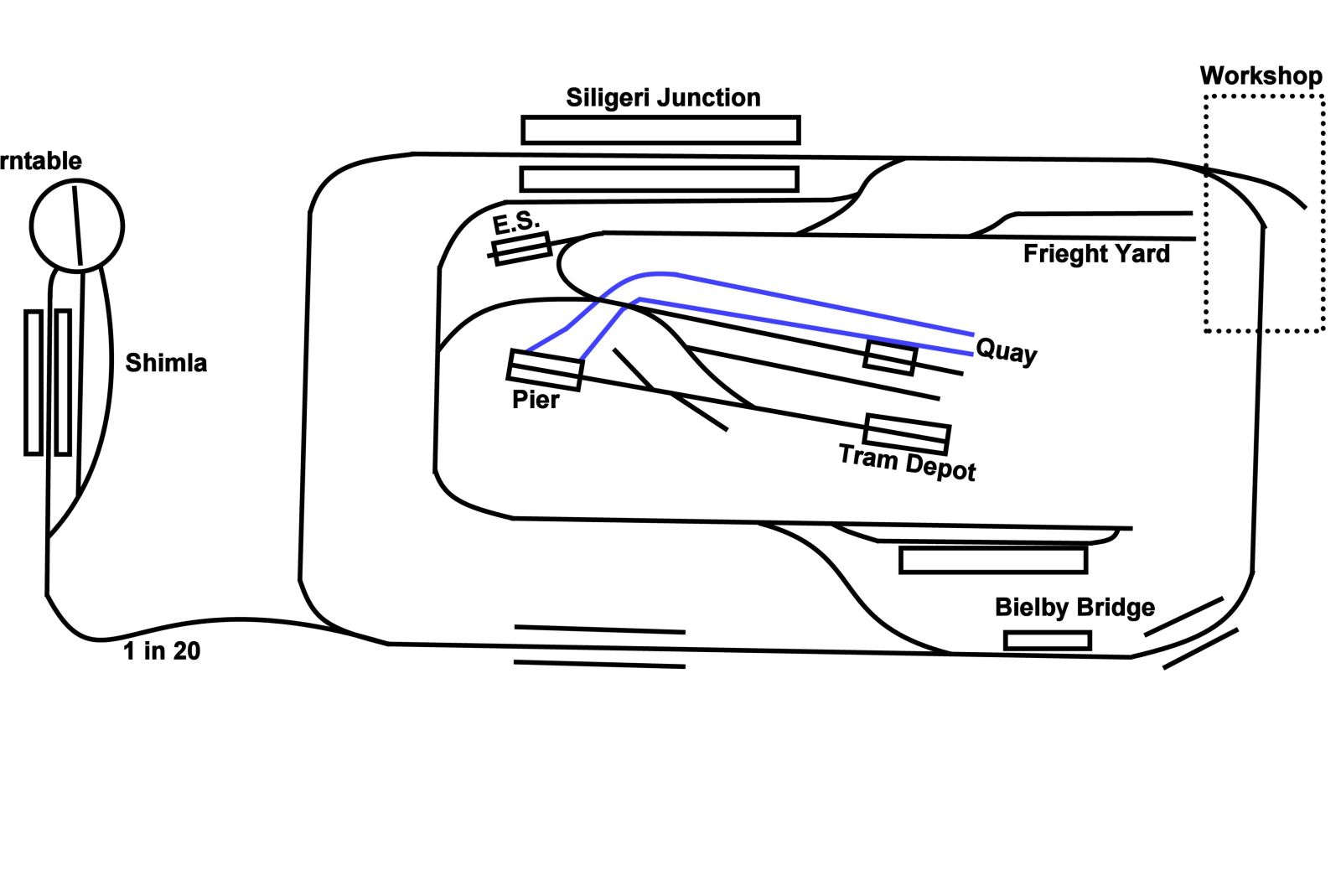 The track plan shows how the railway threads its way through the workshop and up to the Hill station at Shimla. Trains can be run from Shimla through Bielby Bridge, Siliguri Junction and terminate at Kurseong. Alternatively mainline trains take the line from Siliguri Junction to Bielby Bridge possibly including Kurseong and proceed up the mainline (being held in the Workshop).

In the garden opposite the BTR is the refreshment room used by visitors to the railway and considered by the Rochford Railway Group to be their Clubhouse.

As a scratchbuilder, Rod takes great pride in his stock. All locomotives use chassis from the likes of Hornby, Triang, Bachmann, Rivarossi, Marklin and an unknown manufacturer from Slovenia. The wheel arrangements have been modified according to need – for instance an American 2-6-0 Logging loco was converted into a 2-6-4 tank locomotive from the L &B. Yes, I know that the L& B did not have any 2 -6 -0 locos but the model captures the essence of this railway. 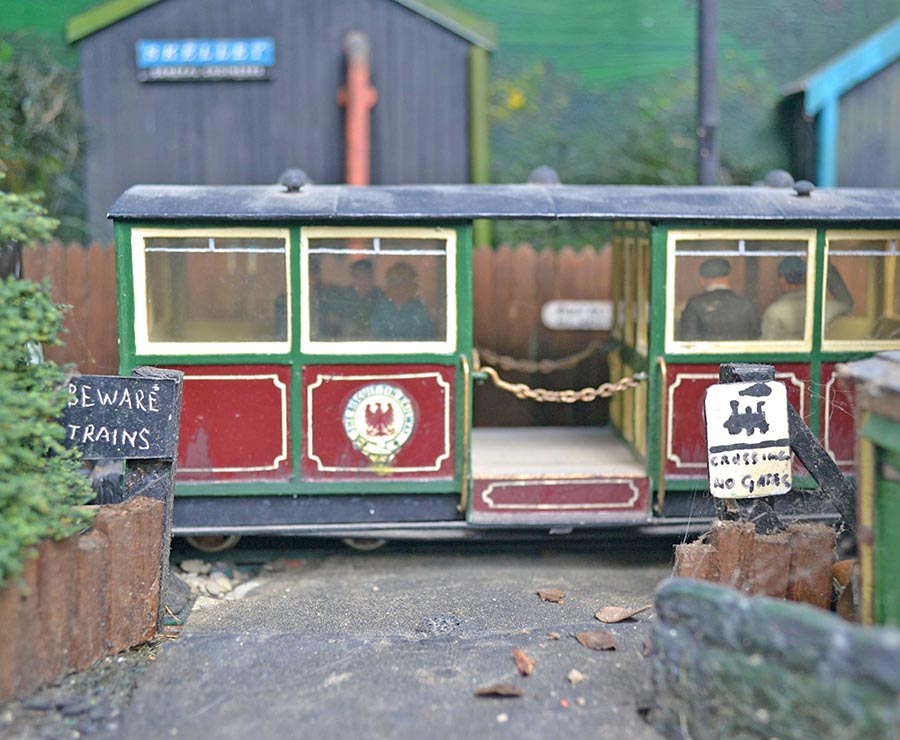 Rod has managed to do the same with some L & B coaches. Every locomotive is fully detailed using anything to hand such as pill capsules used for loco lamps. Currently bodies are made from sheet plastic either by using heat to mould shapes or by laminating and then carving the desired shape. Body sides are laminated and glazing inserted as an inner lamination. Despite the proliferation of materials used, no effort is spared to include backhead details on steam engines etc.

The original locos are now 37 years old, still running well, and are based upon Welsh Quarry Locomotives. The first is called Marchlyn and the second is named after Rod’s Mother – Eva Ellen. Subsequently models were made of other Welsh Quarry locomotives including Upnor Castle and the Baldwin.

As Rod’s interests widened, he has added models from Leighton Buzzard sand quarry, the Essex Brickfields, and now a range of models based upon the Indian Hill Railways. As has been suggested, he has a wide ranging interest and he has included a number of railcars and trams. Notably he has modelled 2 of the articulated railcars which work the Kalka Shimla line and an articulated steam railcar from Germany with outside cylinders. Additionally Rod has made a number of trams based on prototypes from Britain and Munich. 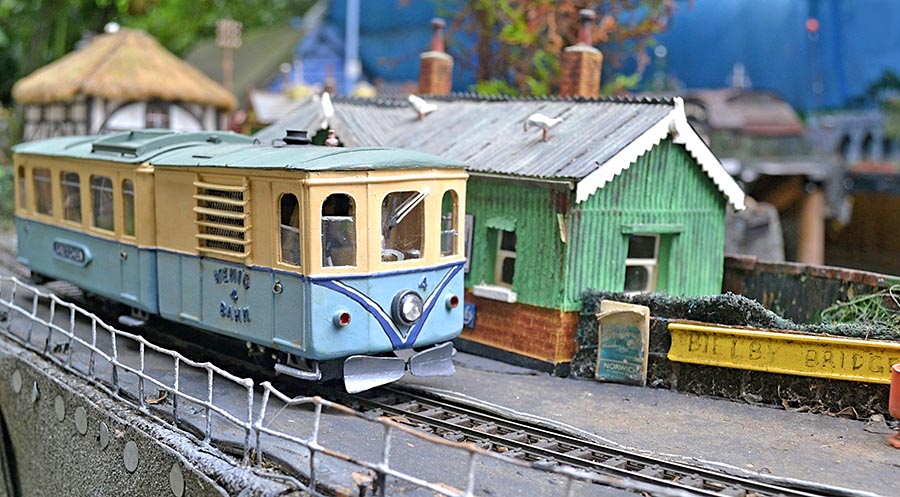 The question has been asked as to how Rod produces his models and where does he get his plans from? The answer is that he does not use plans – he works from photos or any other source material he can get.

For instance, Rod made a detailed model of an Indian railways NDM6 using a 16mm/ft Roundhouse Model of the same loco which he borrowed from a fellow garden railfairer. He measured the 16mm model and reduced the dimensions pro-rata. Rod’s model used the chassis from a Marklin Tram and a body made from plastic sheet. This, of course is a prototypical model but often Rod will produce a model based upon an impression of the railway itself – for instance the little DHR 0-4-0 tank Locomotive. He has used photographs for the Kalka- Shimla Railcars and scaled it accordingly.

The BTR has a range of around 50 coaches and freight wagons based upon English and Indian prototypes. The earliest were models of Corris railways coaches (now 37 years old) made from cereal packets. These are detailed, painted and varnished and are still running. The bogies are made from plastic with Romford wheels – these are later additions to improve running. The last coaches to be made are models of DHR coaches in blue livery with opening doors. Rod has also made a model of the post coach used on the Indian Hill Railway. Some of the coaches are made with working tail lamps and others carry Indian LV signs in place of the lamps.

When Rod started working in this scale he found that the only ‘people’ available in the scale 10mm/ft were from Scalextric. These however were based upon motor mechanics and needed considerable re-working. As time went by, these became rarer and he now makes his own figures by laminating sheet plastic, cutting out a shape and then carving the 3D shape allowing him to provide figures for all scenarios. 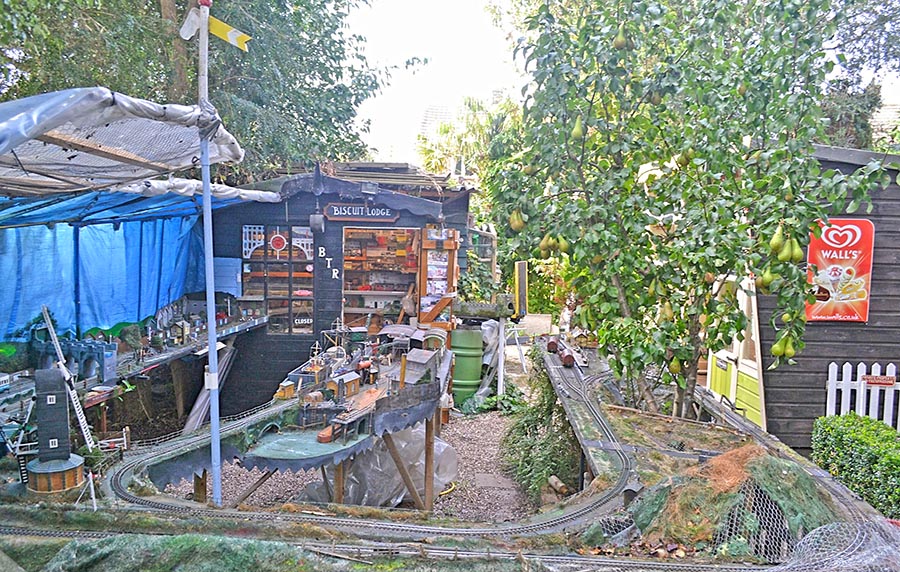 The scenery, buildings, bridges are all made by Rod but it would take too long to describe them all in this article. This little Railway has become a source of inspiration to many and a source of entertainment for even more. Rod has dedicated a lifetime to creating a little bit of magic in the Biscuit Tin Railway and he has a rare talent for capturing the atmosphere. We, in the Rochford Garden Rail Group have all benefited from Rod’s talent on our own Railways and it is a pleasure to share the ‘magic’.

Although the scale/gauge combination of 10mm/ft on 16.5mm track is not a popular one, it is ideal for anyone interested in narrow gauge modelling and intent on scratchbuilding everything. It is therefore not an easy option but the result can have an inherent charm all of its own.

For more advice and information, plus the latest layouts covering a selection of gauges and scales including OO, N and O, click here to head to our Model Railways section.